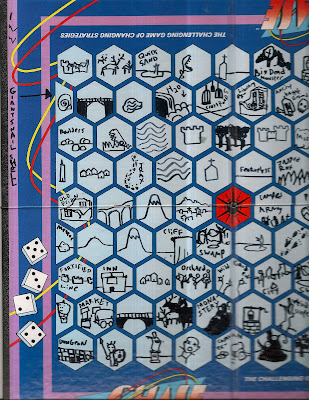 So as you may or may not know, I made this Die Drop Instadungeon. (Which I remember now about how someone made an easier-to-read version of the map-part here).
The nice thing about it is, it not only stocks monsters and room types (which all random generators do) but it does it fast and gives you the spatial relationships between them immediately--which is otherwise hard to do without automating the whole process which is not always optimal.
Anyway, the idea is you make a grid of interesting dungeon features, drop lots of dice on them--everywhere a die lands: that feature is both present and located there. (Maybe read it if you're confused.)
Also, you read the dropped dice according to a chart which is separated out by die type, so like a 4 on a D8 means a wizard is there wherever the d4 landed.
AAAAAnyway it occurred to me that this approach is equally (actually better) suited to making hexmaps.
So this is my die-drop Instaregion....
Above is a hex-version I drew on top of the board for an old TSR game Mandy bought me called Chase", below is a more portable gridmap version I drew for my D&D notebook. 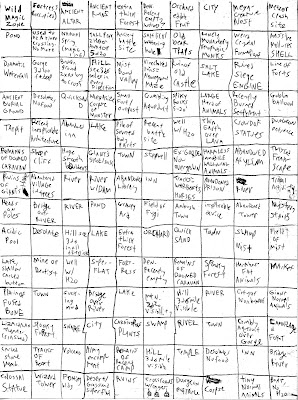 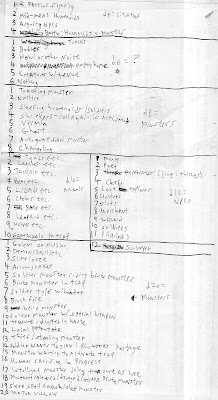 So you take the map, drop some dice: 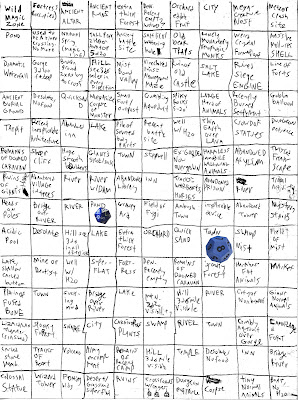 Then you have those places with those things in them. If you make copies of the Instaregion map you can circle them (superfast, you can build the region as its explored if you are a megaslacker) or just make a new map where you white out the other stuff, like so: 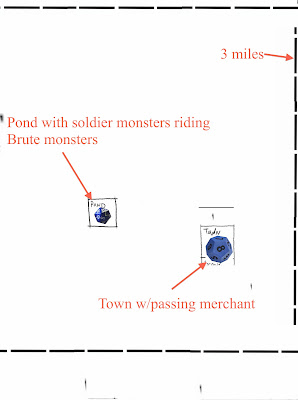 My Instaregion does not include basic terrain type (like: are we on permafrost, water, grassland, desert, etc or what) since in my game that level of granularity is already known. (Though you could totally make one of those). This is more for just "hex dressing" and setting what random encounters or other features are in the hexes.
Also, I know a really sexy convincing proof-of-concept would involve using way more dice but those 2 were the only Gifs of dice I could find on short notice and I got things to do.
I'm sure you can figure it out from there, right?

One thing i realized a ways back is that when you have a die drop chart that implies layout, a D8 roll makes a handy compass for orientation because it has a "right side up" above the reading number

I made a dungeon with the other chart, and it worked really well, actually. Put a piece of tracing paper over the grid, traced the squares, numbered them, and drew some connecting lines and a few blank boxes. Dropped dice for the contents, tweaked the results, and it was ready to go in about a half-hour.

Nice. I like the integration with the grid pattern on the map itself. I did something similar with a dice map I made the other day for when PCs are wandering the plains and they ask "What's around us?"

Thanks! BTW, I'm thinking of writing a pamphlet about making and using dice maps in play, and I'm doing a bit of research for it. Did you invent dice maps or did you get the idea from somewhere else?

I like the doodled-on hexmap formet, and am imagining it as a dry-erase ...

@Roger - You can make anything instant dry-erase by sticking it in a sheet protector and using overhead markers (same ones you have to use for Chessex battle mats).

Now feel compelled to describe the flavours of the terrain in my games.

Very cool :) I did one o' these (more boring than yours) for the Vornheim Hack contest awhile back.

I really dig the die drop tables. As you said they are quick and easy to use.

Ah crap. There really is nothing new anymore. I posted hex-based die drop dungeons for a week and no one pointed me to your original table.

"Also, you read the dropped dice according to a chart which is separated out by die type, so like a 4 on a D8 means a wizard is there wherever the d4 landed."

I've been using this method quite a bit lately when I build new tables. I call it the 6-die method. By having up to 6 different tables each keyed to a different die, you can determine a lot of information by rolling one fistful of dice and you never have to remember which color d20 goes with this table, etc. Have you been doing this for a while and my crappy little brain stole it from you and pretending to invent it?

Much appreciation for your blog, as always.

For variable drop-maps so you don't always end up with the same things being the same distance from the same things: http://www.random-generator.com/index.php?title=Instaregion

The original die-drop instadungeon method is linked in the blog above so it dates from whenever that date is.

Man, I need to get my hexcrawl generator out, but dentist got in the way. It only generates terrain type, so it's a nice match to this one. Watch this space: countersong.wordpress.com

You have Chase!!! I like the idea of the game but haven't had the chance to play it much.

I'm guessing you didn't really like it though considering you recycled the board :D