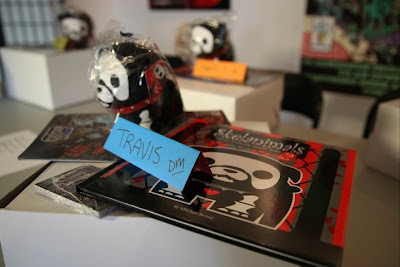 Why can't I break this parking meter by shoving a toothpick into the slot?

Why can't I break this parking meter by shoving 2 toothpicks into the slot?

"Umm, is it ok if Connie parks her car behind that guy?"

Oh look it's Keith Baker and he got a haircut. Or, his hair grew out...

The back room of Meltdown Comics is like Hollywood Geek Underground's version of Max's Kansas City...

Ok, now it's like a wedding, there are a bunch of tables and place cards. Where am I where am I....

Swag. Free T-shirt. Free...whatever that is. Free...I think the Escapist sent us one of those already...

Hey, how ya doin'? You were really funny last night! Hey, thanks!

Now, free stuff...ok, Zak, yes this stuff is free but none of it will help me play D&D.

Keith has a list of characters and the Robot Chicken guy is looking at it. No time to read through this and no time to introduce myself to the other pseudocelebs, if I don't grab a PC as fast as I can I'll totally be stuck with the Feytouched Sleevedancer or some shit...

By default I'm a 5th-level undead elf female. I have a mini for that.

Wait, the DM is now saying my character is a guy. Ok, I have a mini for that.

Ah, now a new and subtle challenge. Try not to confuse the player with the character. This is Jay he is an archer named Archer and he runs the store next door (actually)(I think), this is Dan from Robot Chicken and he's a dwarf cleric, this is Travis he DMed for Wil Wheaton and someone else famous who I think is a girl and is a voice actor (Travis, not the girl)(I don't think) and the DM and this is Matt he's a voice actor and podcaster and your bodyguard and an elf and according to his character's thing your character is a chick.

Ok, back to the first miniature. My character is like 159 years old and nobody can tell whether it's male or female. Ok, I'm Joan Rivers.

It's not often that you have to do your Joan Rivers in front of three professional voice actors, one of whom is supposed to try to kill you...

Where the fuck is Kimberly?

"Alright people, thank you all for participating in the..."

Kimberly will have to be replaced, due to a scheduling conflict she is oh fuck just now texting me about, she's busy having sex for money. This is Vesper, she is the Colonel.

I make a little nametag for Vesper since the rest of us all have nametags.

Ok, now it is an adventure.

"You arrive off the skyway into a lush..."

Ah the exquisite comfort of Eberron...Not just Eberron, A diplomatic party in Eberron...checking my equipment list....Apparently Joan here managed to get to 5th level with no rope, no lamp oil, no caltrops, no G.P....playing Eberron is like staying at the W hotel after years of couch-crashing and hostels. "What're you setting a stick on fire? You want light? We got worms for that." And I'm a fucking ambassador. And I have a bodyguard. And he's a charming dapper young fellow and a professional voice actor. Let me now henceforth wallow in this unearned luxury...

Rock, they do have grapes in Eberron.

...according to all those Type 4 D&D tips a power that moves a guy 6 squares is not a thing at which to sneeze. Especially when on a (spoilers)roof. I use it on the biggest target.

Look at this, we are spontaneously well-oiled right from the get-go: Matt's getting out there and getting punched just like a bodyguard should (and has--it should be noted--a keen eye for stylish tactics), Dan Robot Chicken Milano is a very buff-conscious cleric, Archer the Archer remembered about Readied Actions, Vesper is managing to convince the DM that an empty glass growler counts as a two-handed weapon and my wizardess can just get WWD&DWPSReadersDo? tattooed on her wrist and be done with it. This game is easy.

The volunteers do inform me, however, that the sandwiches have mayonnaise.

Nothing left to interrogate.

I take the only damage I take all night until the boss by failing a climbing check and being attacked by the eternal nemesis of diplomats everywhere--the floor.

"I say, it was a very fast moving floor. A Lurker Below, perhaps?"
"Yes, ambassador," this is Matt, rolling his eyes, "I'm sure, ambassador."

I worry I am not taking as much advantage of the volunteers who are supposed to bring us snacks as I could be.

The DM interprets Vesper the Colonel failing her stealth checks as the Colonel loudly and spontaneously commenting on the decor. Guards...

Oh but then lunch...in-real-life lunch.

What's this...rip rip...it's like a chinese dim sum bun on the outside but then...hmm like pink cream cheese and cheesecake. Oh, that's some quality there.

Now, right, we make our way down pretty much the only likely-looking path down to Encounter Area Two.

Fearsome are they--and many. Well, many anyway. 3 rounds. Fuck, forgot to leave people to interrogate again. I am glad I'm not a minion.

There appears to be no point to taking anything normal from anyone, it will only do less damage than your weapons.

We identify potions by saying "What are they?" and the DM tells us. They're healing potions. Nobody gets accidentally turned into a worm.

A pulsing and ethereal light appears to be coming from over there...arcana check at some obscene bonus...I roll like a 34...

Well then by all means let's go over there...

"I strongly suggest we ignore this phenomenon and leave, ambassador."
"Oh, where's you sense of fun? No-one of your generation has an ounce of gumption..."

I cannot help but notice there are no further battlemats under this battlemat. I am guessing this is the Fearsome Final Encounter.

Also my thing tells me I'm lawful good, so it's, like, roleplaying.

Destruction of the spooky thing unleashes a spooky chain reaction resulting in monsters. The Colonel told us there was beer in this room but I think he was lying.

The major ticking clock here is the biggest monster gets worse when the DM rolls a 6. Actually the major ticking clock is Meltdown Comics closes at 9 and all the other kind-of famous people already finished killing all their monsters. We were ahead of everybody until we decided to go for the spooky things.

We were supposed to sign our condition cards, I think--if we had any conditions--and they were gonna sell them on ebay. I got slowed. I signed "Zak Sabbath" under Slowed. Now everyone will know the truth about me.

There is a really nice Martin Emond painting on the way to the bathroom.


______
*This adventure will, I'm told, be available from WoTC and all proceeds will go to the charity, so I'll try not to spoil anything.

Thanks to you, "drunconscious" has now entered my lexicon. I eagerly await the day I may unleash it.

Enjoyed the stream of conscious post-adge.

I do love the way you tell a story Zak. I felt like I was there. Or somewhere near by. Say a little to the left. Yeah there. Cool.

My wife kept asking me why I was chuckling. This is why.

Very amusing. Although that's partly because: a)I don't know what a growler is in t4 but b) I do know that it's a slang term for vagina in parts of this here United Kingdom. Thus, the bit about the glass growler being used as a two handed weapon caused a very perverted mental image indeed.

Interesting point on battlemats as spoilers.

I take it you didn't think much of your character. Pre-gens suck, with few exceptions. Leaving someone alive is also a good idea, but I find they usually throw themselves on my swords/guns/mercy... and sometimes I forget. Nice to see others are afflicted with my own bad habits. :D

@steven--
not at all! I loved my character.
I also think giving her an string existing relationship to one of the other pre-gens was a smart move, since it gives you your first joke and kickstarts the role-playing.

@Nagora - a growler is a big half gallon glass beer jug. Which, arguably, is vaginariffic.