They Could Never Control The Game

I do and I don't know why the OGL thing made fans turn against corporate D&D in numbers big enough to cost them money.

On the one hand it makes the owners of Dungeons and Dragons look not just greedy, but clumsily so--on the other hand, so does nearly everything else they've ever done.

I mean, this is a company that could have--with the snap of a finger--vastly improved the community for everyone--including themselves and their most important employees--by pointing out all the worst actors online spread a right-wing conspiracy theory about Mike Mearls and didn't lift a finger, presumably because they were scared of Streisanding the situation in the press.

They'll take steps to protect their IP, but not their community, their employees, or their own reputation. Always and forever. 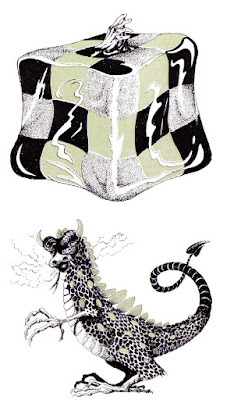 What have we here?
This gelatinous cube, this dragon? So precise, so assured, so elegant, so finicky, sensual yet controlled, one might even say... continental?

You know who really wants to play D&D? 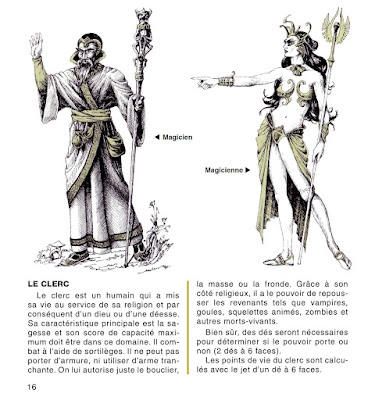 A woman named Mathilde Maraninchi--arguably the author of the first retroclone--says fuck it and makes French D&D: 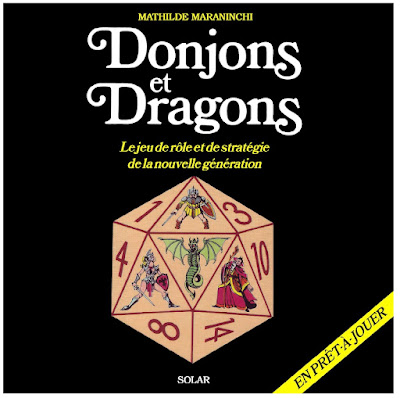 ...the rules are a simplification and mash-up of the various TSR versions of the rules by that time.
I'm told it's a little chaotic--but that was pretty normal back then--and hard to play--also pretty normal for a circa 1982 RPG--and the illustrations by Joël Bordier are kinky as fuck: 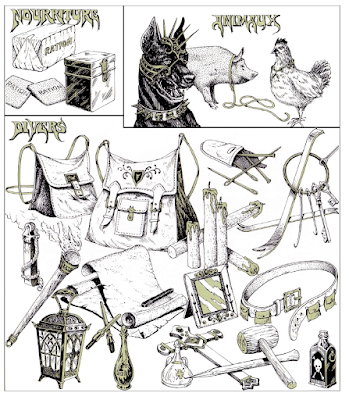 It is arguably not just the first French RPG but the first retroclone ever, and one of the earliest works by a female RPG author.
TSR killed it of course.
Thanks to French gamers Peggy and Arnaud for bringing this to my attention, here are some more details...

And some more here courtesy of Google Translate and French gameblogger Dvergguden.
Thanks to all of them for their help with this article!
Vive la resistance. 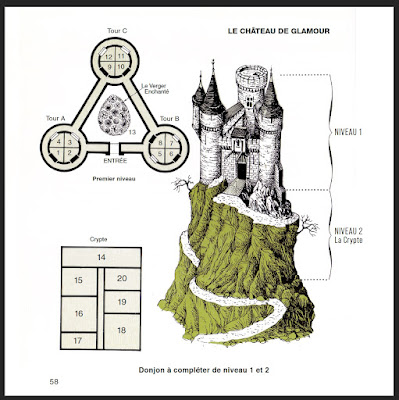 The art is charming.
We would live in a different world (and probably play different, better games) if they smashed the bad actors with the same power that they used against early French retroclones.

I feel like I had an old ral Partha miniature that looked like that magician...some really cool drawings...

@Zak, Mandy: Everyone lost.
You. Me. All interested in RPGs.
Except, maybe, those who were interested in social control of the community.

Once upon a time, I enjoyed visiting this blog for the creative stuff you produced. Now, it is only about your feuds.

Get over it, both of you.

Start by creating stuff again that people who are interested in games care about.

One step at a time.

You do understand that lying about a felony is:

1. a totally legitimate thing to be concerned with

2. Has had massive consequences for me

3. And is way more important than whether you get free game toys

Please answer, these are not rhetorical questions.

1. Totally Yes.
2. Yes. It has had massive consequences for you. And many others. There are sites where I'd immediatly suffer sanctions if I started to discuss your products. Sanctions demanded by people who care about social control more than they care about games.
3. I can understand that is important to you. It is the dynamics of those conflicts. Every party in it gets more and more embittered, desperate, frustrated.
Those who remember better days slowly turn away, not out of spite or judgement, but because they don't want to become part of other people's grievances. Sad, but that it is how it works. I have been at that place long enough to make a qualified statement.

And this is another way they - the Witch Hunters, the ochlocrats, the authoritarian smear campaigners - win.

Zak the Creator is dead.
Zak the Undead Avenger rises.

"Getting free game toys" is one way to see it. Another one: Keeping the DIY culture in gaming alive. Becoming/staying a relevant source of inspiration for others, who in turn produce stuff. And at the very least: Showing up the middle finger to certain folks.

Because if they win, gaming suffers and dies. Each day, a little bit more. Because authoritarianism kills creativity. It breeds gatekeepers, censors, witch hunters and informers, fearful subjects to rule over. It kills inspiration, fantasy, initiative, trust and courage.

And do you understand that it's not reasonable to ask me to de-prioritize activities designed to get my life back -over- what "DIY culture" or anyone else wants out of this blog? Like "Get over it" is not a reasonable request for you to maake?

Again: this is not a rhetorical question, please answer.

Yes. I can see why you deem this "request" unreasonable.

But you don't get your life back.

That it is not how it works.

I can understand that wish, because once I was there, too.

The only thing you can do is to live your life in the forward direction, not backwards. "Getting over it", "Coming to terms with the past", "Getting back on your feet", however you name it - is an essential part of it.

But I am totally okay if you ignore my suggestions. You can pretty do with your life and your blog what you want.

Those are not practical suggestions.

There is no life worth living under current conditions or any conditions that do not result in a reversal of this situation, not simply because of the unpleasantness of the situation or feelign sinvolved but because, practically, all things that makes breathing worth the effort are separated from me.

Also, even if there were some reasont to -not- try to fix the problem, there is _no reason at all_ under those circumstances to do anything to help the DIY RPG community.

I have explained this many times on this blog.

Again: not a rhetorical question:

Do you actually read this blog or just skim it?

If so: why would you make a suggestion that flies in the face of what I have told you repeatedly?

I stopped reading this blog regularly, skimming it only in the last few years. I noticed your suicidal-sounding undertone just recently, though. If so, please get professional help if you don't already have it. But again, it is ultimately your choice to salvage what is left of your life or throw it away. Would be a pity, though.

That said, I believe I understand your point of view - I just see it as a dead end and have a different one.

But, maybe I am in total misunderstanding. Please define what you mean with "getting your life back".

-Getting my life back means you can google me (which nearly every stranger I come into meaningful contact with personally or professionally does) and the smear does not come up except perhaps with language designating it as a smear.

-"Getting over it" is a bit like saying to a gay person they just marry a nice girl and forget about their problems.

-I have talked to more than one professional, they concur with me:

1. Is there any part of that you don't understand?

2. If you do and, if you feel you "lost" something as per your first comment and think it would be a "pity" if I died have you written 502 words of complaining about what's on my blog to me instead of writing 502 words that would help and posted them somewhere that might help?

3. If the answer is "you don't think it will work" then please know that _trying is better than what you're doing now_ which is simply demonstrating to me a very large divide between a person claiming to give a fuck about something and what they're willing to do for it. Which is a lesson I already know all about. Understand?

If you do and, if you feel you "lost" something as per your first comment and think it would be a "pity" if I died have you written 502 words of complaining about what's on my blog to me instead of writing 502 words that would help and posted them somewhere that might help?

I hope this qualifies.

If the answer is "you don't think it will work" then please know that _trying is better than what you're doing now_ which is simply demonstrating to me a very large divide between a person claiming to give a fuck about something and what they're willing to do for it. Which is a lesson I already know all about. Understand?

Thank you for sharing this interesting piece of RPG history.
I would like to mention, for those interested, the blog linked above does provide a completely restored PDF version of the game at the end of the article.
The layout reminds me of AD&D 2nd edition, which came out seven years later.
It's even printed in two colors, black and greenish, where 2nd edition uses black and blue.
The illustrations are very cool, on par with some of the best in that era in my opinion.
I only wish I knew French.

The trolls love that advice: It allows them to lie unchecked.

It's wonderful advice if "energy management" is your priority over, say, the trolls' victims.

It's a bit like saying the best way to manage a shark that is eating your child is to not help the child. You sure do conserve your energy by doing that.

You should address that.

Antagonistic trolls attempting to lure people into energy drains are one type of entity.

Child-eating trolls are another matter. They necessitate re-education in a language they understand until they learn the error of their ways.

Quite often simple karma deals with that issue.

As soon as you go "I will _select_ which lies to check" you are opening th edoor to a discussion of which children are important enough to save.

No sharks on your beach, ever. Not for a second.