Don't Be Any Of These People 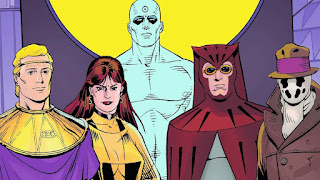 I'm not the biggest fan of Watchmen but it occurs to me that one of its strengths is that it presents an oddity in heroic fiction: a compelling and differentiated cast of characters who are all wrong.

At least from their creators' point of view. We know this was intentional because neither Dave Gibbons nor Alan Moore are exactly quiet about their beliefs or their takes on the characters.

I have met all these people in the last three years, honestly, and they are different monsters. It has been important to know that.

However, the richness and plausibility of its moral grays does, at least, seem to give it a better chance at entertaining smart people than a fiction whose main selling point is reminding them that good things are good.

What about the comedian?

I guess I forgot because he's not there at the end.

But anyway, if someone's not smart enough to see what's wrong with Comedian, I doubt they'll get much out of reading the blog entry.

Also don't be doc Malcolm, turning sick people into useful tidbits for your career, don't be the people on the island, creating monsters for someone's grand plan, et cetera et cetera. Out of all the monsters in the book, I find Rorschach to be the less monstrous.
Or maybe he's just the monster I prefer to be, I dunno.

Be someone not in that story.

Don't be a pet, waiting to be disintegrated as collateral damage.

Yeah, I see your point, it's a good point.

You could be Bernie (either) I suppose - even as doom is closing in, reach out to your fellow human beings

In Watchmen those bystanders are clueless and die and so do the people they reach out to.

So: they're sweet but their ignorance is their undoing as surely as Dan and Laurie's "oh this is over our heads".

Pretty much you don't want to be ANYONE in the Watchmen universe. Who wants to live in a place created by Moore's mind?

That said... what about Seymour? Who may just change everything at the end.

The New Frontiersman assistant who finds Rorschach's journal in the crank file and appears about to publish it. (I had to dig to find his actual name myself.)

Actually let's flip this... who is a character in a fictional narrative (comic, book, TV show, movie, video game, whatever) you should actually STRIVE to be?

Bouncing Boy is cool. That's a part of you that I never expected to see.