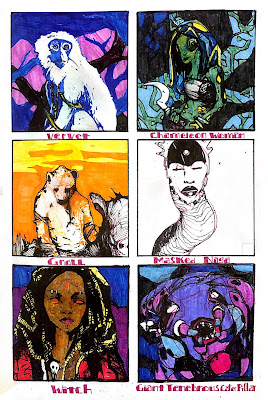 The Gods in Cesaire

All gods have visited Cesaire, but when they visit, they must walk on two legs. When in Cesaire the gods may only be the size of their worshippers. For this reason, many have died there. In death, they grow again, and mingle with the stone which makes up the Cube.

Currently the most widely-worshipped are:

As the gods walk among their worshippers, it is common for those on sacred business (the businesses of ritual, treasure-hunting, murder, great questing or war) to go about masked or in strange disguises, so that the gods may not know them. Conversely, sometimes costumes are worn to attract or enlist the aid of particular gods.

The Hour of Knives

Despite this, human lives may only be taken between the hours of 3 and 4 am, lest the dreaded Hybrid Curse of All Gods be summoned on the murderer. This prevents a great deal of open warfare.

Death’s Parade—Death, the Second God, visits Cesaire once per year, and takes a tour throughout the entire continent. His skull-face luridly painted, he walks in a tattered blue robe and carries a staff made from the bone of an unknown animal. The dead rise from their graves and follow, then follow. As the parade approaches their homes, the living paint their own faces white so as to be mistaken for the dead.

The Gleam Tide—Each summer, the tides bring in the cargo from sunken ships. Coastal villages and port cities open the Gleaming Season with a childrens’ festival dedicated luck and beach-scavenging.

Feast of All Heroes—Once per year, all civilized cities of Cesaire throw a feast, to which all the heroes who have rendered great service to the city-state or the nation are fed and feted.

Night of the Vampire—On the last day of the harvest, all cities and villages are visited by one vampire each. Lines of sacred salt are drawn around the perimeters of civilized areas, of every home, and around the cribs of all children. Bold boys and girls dare each other to challenge the vampire, though, tragically, more fail than succeed.

Days of Testing—Most human societies within Cesaire have Days of Testing, where those youths who wish to embark on dangerous life-paths are challenged. Those who succeed act as waitstaff at the Feast of All Heroes 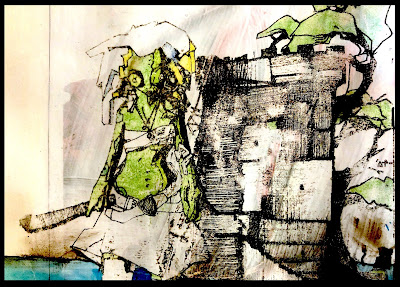 Typical Adventures, Quests, and Assignments for Adventurers, Native and Local

*For foreigners only: A faction enlists you to pretend to make “first contact” with another faction, acting as merchants from another land. You will be asked to sabotage the target faction’s war efforts or liberate a prisoner or artifact.

1-Nobody who isn't black or African should make it ever

2-Well, they can but only if they did their research.

On the first criteria, I obviously fail. On the second: if you insist I name-drop who I read and talked to before writing my game stuff I can, but it would be hard to name a hurdle I didn't jump. I am 100% sure I talked to more contemporary African artists than you think I did. And at least know where Cesaire got its name before asking.

This plus all the rest of a 17-page Cesaire module is available now in The Store for 20$ (25$ if you use Onlyfans). 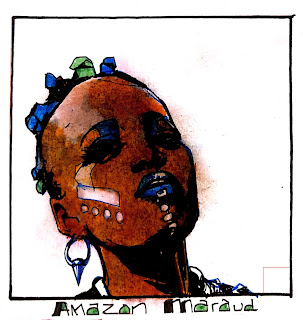 That gnoll. There's something terrifying and alluring about the illustration.

It's also very nice to have the current bestiary as part of the purchase. My favorite line descriptor is still from Fiendish Best Men: "They worship Tittivilla in a way she's not entirely comfortable with." Paints quite the picture, and reminds me it's probably time for my next therapy session...

Hyenas and wolves are hard to draw because if you get just one tiny proportion off it just looks like a dog. For the gnolls I screencapped a bunch of action shots from david attenborough documentaries, trying to find faces that were just right.

As for Tittivilla--I have this idea that the fantasy religions might work more like real world ones where any given "ism" is actually infinitely malleable--at least morally. So just as there's hippie peace Christians and gun-toting Christians I figure there's PC cleric-healer flesh worshippers and disturbing pseudo-slaaneshi ones.

Do you like flesh? Are you made of flesh? Then Tittivilla might be the goddess for you!