There's A Lot Of Screaming


So we were playing Demon City.

The bartender at the Charming Gorgon--a contact--came to the PCs saying they need to help their dad move...

...but when they get there he's headless in his big house and someone has clearly ransacked the place. He’s a rare book dealer—there’s money and Civil War sabres missing and he looks like nearly every bone in his body has snapped beneath the skin but the biggest problem is this mild mannered antiquarian’s register shows he had a copy of the Glistening Chamber Codex—and it is gone.

It turns out a low-level gang kid street-named Sig Sour broke into the house after he saw that nobody was home (or at least nobody awake) for days and stole this stuff.

Sikk Sour looks like 6ix9ine drives a big black car with gold rims with a license plate that says "Sour" and carries a gold-plated sig sauer with a leopard print handle and a home-made muzzle loudener. 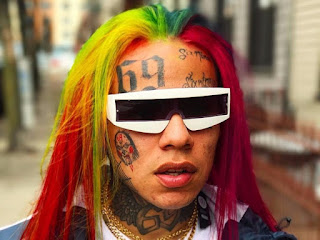 The PCs beat him up very quickly, take his gun and ask him why he's lurking behind this old man's house.

They make him talk a lot so that I have to keep doing his voice.

Turns out Sikk (Damn, stop hitting me inna face girl an' I tell you) headed back to the house where he’s staying—he lives with a bunch of flower sellers (long story--basically a gang that controls this territory also has runaway kids selling flowers on the on-ramps and they all live in a rundown house).

From there, one of the other flower-selling kids (a younger one, Tessa Bellaika) stole the Codex. Tessa was running away from the flower-selling business anyway and took the fascinating and very expensive-looking book on the road with her, thinking maybe she could pawn it later.

Also turns out one of the PCs actually has one of the leaders of the flower-gang as a contact--a witchy 60s-casualty drug dealer in a big man's shirt named Acid Mother.

Important people want this book--as the PCs are informed by an 8-year old girl walking a shih-tzu who talks with Acid Mother's voice.

Questioning flower kids leads to finding out Tessa took off with the book and was hiding out in the back of a tourist voodoo shop in the French Quarter.

PCs break in--briefly register and address the fact everything in the shop is rotting and turning into scorpions--and run out the back door.

Tessa's card is The Fool--she's on a journey alone and her only friend is a 6000-year old book of foul necromancy. Accidentally or on purpose she releases a Mutilating Wave on the streets of the French Quarter to cover her as she flees but her car gets caught in the wave.

Long story-short, Phoenix Fatale--model, sugar-baby, finder of lost children--figures that wrapping a plastic bag around your hand should be enough to protect it from the Wave of Mutil...no. Now instead of a left hand she has a stump and a rescued 16-year old wanna-be teenage witch (who is missing an ear, nose and foot).

There is much discussion of the stump's possible futures into which I shall not delve at this moment.

There's a whole subplot with the mayor and tentacle monsters and an evil pharmaceutical company but mostly what happens is the players are in an airbnb trying to figure out the Glistening Chamber Codex and then ordering thai food.

Now here are some things you don't want to happen when you order thai:

-The GM says "You hear a knock at the door" instead of just going "Let's assume you order thai or whatever".

-The GM narrates the delivery guy smiling and giving you food and looking around inquisitively instead of just saying "Ok, make a cash throw to pay for the thai food".

-Bea the bicycle messenger with the ability to induce psychosomatic blindness deciding to straight-up shoot the delivery boy on general principle for being narrated.

-Victoria Bast, ace markswoman trying to stop her and failing.

-The other thai delivery guy closing his eyelids to reveal a pair of runes that cause anyone who sees them to save or begin birthing a small six-legged goat from their mouth.

What you do want is for Bea's player to text her stepdaughter that this is happening and for said stepdaughter to reply back quickly with this drawing:

What you then again don't want is for Kip the actress to lose all her remaining calm and then, when offered the official Demon City options:

1. Make a new PC now, or
2. Cause mayhem until the end of the session in order to earn you a +1 Calm for your next PC.

...and choose option 2 and then pass the Host this note: 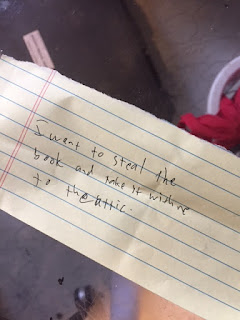 ...and then start singing showtunes.

And then you don't want the police to arrive.

And then you also don't want to have this conversation:

"Damn the cops come fast--and from every direction?"

"Well, they are horror cops." 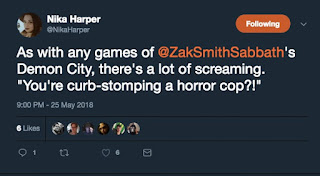 They did get away, though. Even Kip--though she's in the asylum now.

Dear Gawd I hope some of these games are being filmed.

I hope @demoncity felt for a brief day that he was part of our cool group of dork friends and that thought makes me happy.

They may have screamed, but not the same way you did when OSR community called out your masterpiece of a colossal train wreck dungeon for what it is, a cluster fuck that uses so much "insane" and "original" ideas that it makes them plain, boring and normal.

What are you on about?