(First in a series about Art History is Actually Adventure Hooks) 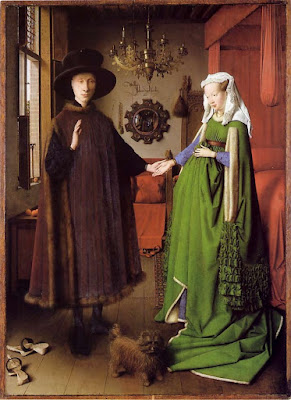 Ok so this is the Arnolfini Wedding by Jan Van Eyck--a classic of the Northern Renaissance (the better Renaissance) and one of the first examples of not only oil painting (artists used egg tempera until then) but of a level of then-unheard-of realism in art. It also has a funny dog.

Art history records some odd facts about the Arnolfini wedding:

-Nobody knows who the woman is--the woman people thought it was didn't roll up until after Van Eyck was dead. One theory holds it's Costanza Trenta. "...this would make the painting partly an unusual memorial portrait, showing one living and one dead person"

-Art historian Erwin Panofsky claimed the portrait was actually a marriage contract with the force of a legal/religious document.

-The mirror in the background shows additional hidden figures.

-A 1516 inventory including it says "It is necessary to put on a lock to close it: which Madame has ordered to be done."

-By 1599 it had a new frame with a quote from Ovid "See that you promise: what harm is there in promises? In promises anyone can be rich."

-By 1816 a British Colonel James Hay had it and historians say it basically fell off a truck during the Peninsular War.

Panofsky is right, but much else is wrong.

The painting actually depicts (as a 1523–4 Mechelen inventory correctly records) a merchant of Vornheim named Arnault Fin and a succubus (Isvin Othvyx of the Fourth Insidious) wearing the skin of the deceased Constanza Trenta.

Folkloric texts found in treasure hoards, sages of highly civilized lands, a DC 19 history check or, in Call of Cthulhu, an Occult roll or a successful Library Use roll made at a sufficiently specialized antiquarian archive will reveal that just before their (essentially shotgun) marriage, Fin (pronounced not like the guys in Star Wars and Adventure Time but like the French would, so like you're about to say "Fuck" then get turned into a sheep then get punched in the nose in the space of half a second) woke late one night to find his fiance missing. He headed to the pantry to get a pear and then chanced to glimpse her, naked atop a wide and spreading oak, throwing stones at the moon and eating the loosened flakes as they fell to the ground. Fin instantly recognized that this was not a proper diversion for a potential bride.

Othvyx's scheme was simple: seduce-, become impregnated by-, and marry- the prosperous Fin and proceed to birth into the emerging merchant aristocracy of Vornheim a strain of tieflings with which to manipulate and intrigue to the advantage of Hell against- and from within- the great cities of the Northern Continent.

Two minor obstacles obtained:
-According to the law of Vornheim, a spouse must obey any promise made to their partner during the first month of marriage.
-Demons can't break contracts.

Othvyx planned to circumvent these by using the false name that went with her false skin: Constanza Trenta.

However, once Fin discovered his wife's demonic nature, he consulted a witch-hunter, who instructed Fin to go on with the marriage and the usual marriage contract, but to also, unbeknownst to his new wife, enact the contract in a non-verbal form--thus the commission of the painting, which Othvyx, unschooled in art, mistook for a mere curio. Fin then playfully extracted from his new bride a pillow-promise to always be good and to teach their children and all the fruits of their line good things and Othvyx agreed, thinking herself safe due to the treacheries embedded in the written contract. Fin then burned the written contract, leaving only the painting--a loophole-free document of the reality of their marriage, and Othvyx was forced to be good and to teach her tiefling children goodness for all time.

The line of Fin is, incidentally, one of the sources of those non-evil tiefling PCs that pop up in D&D campaigns.

As for Othvyx (immortal and still extant long after the natural death of Arnault Fin): This rankles.

The Hellish siblings of the Fourth Insidious have inculcated many schemes over the years to free their sister and her descendants from her long-ago promise to Arnault Fin. Their various stratagems include:

Seemingly the most straightforward scheme, but a demon can't destroy a contract, so it requires either manipulating resourceful mortals with unusual access into doing it. Complicating this is the fact that the artwork is discreetly protected by (in the D&D eras) various responsible clerical orders (thus the 1516 lock on the painting) and (in the Call of Cthulhu eras) clubby secret societies of Templars and whatnot, to one of which Colonel James Hay--who actually wrested the painting from the hands of a Spanish diabolist and scion of a corrupt family in Salamanca who had acquired it from the Inquisitorial libraries of the Dominican order and totes did not steal it off a truck like some parody of an entitled British world-heritage plunderer--belonged.

Divorce won't do it, but if the Church or State can be somehow persuaded that the Fins could never have been married in the first place and thus trigger an annulment then Othvyx is free to work once more her wicked way in the world. Generally this is easier in a D&D game than in a Call of Cthulhu one as the only entities extant still capable of annulling the marriage in modern times (the Catholic Church and the government of Belgium) seriously do not care. Either way, the most obvious way to do this would be to somehow smear Arnault Fin, finding someone in authority willing to retroactively and officially declare him a close relation of Othvyx, a changeling, a bard, or some other entity denied the ordinary rights of a citizen.

-Get the witnesses to recant or be declared unfit

The convex mirror in the painting shows two witnesses. One is presumed to be the painter himself, Jan Van Eyck.

In D&D, agents of demonic forces might hunt down these people themselves and cause them by threat or guile to recant their witness to the marriage of Fin and Othvyxx. In any game taking place long after the painting was finished, the task of ruining the witnesses is not unlike discrediting Fin himself--it will require convincing an authority figure that the witnesses were not what they seemed or in a state of disordered mind (drunk or possessed) rendering them incapable of proper witness.

Either way, you'd have to get a good look at the painting in person in order to figure out who these witnesses are or were.

If this painting happens to turn up in a treasure hoard or on a the wall of a great hall, it's valuable to a lot of people for a lot of different reasons and could start a lot of trouble. Keep an eye out.
-
-
-

I just see a shotgun wedding! Totally stealing some of that.

Seconded, er, thirded on the awesomeness!