So we continued playing Burning Wheel incorrectly this week in the Exotic East.*
Click to enlarge my Exotic Burning Notes: 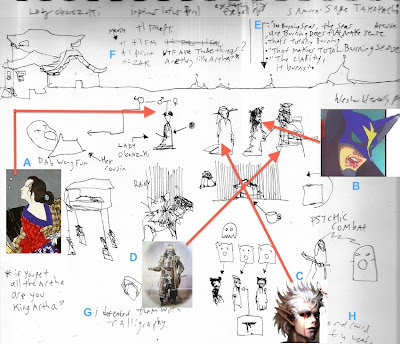 Burning Personae
A. Lady Oborozuki (young witch/acupuncturist) (Mandy Morbid)
B. Impetuous Lotus Peril (deluded noble) (Zak)
C. Eye-Shaking King (sad elf) (Cole)
D. Sagei Takahachi (loyal retainer) (Michael)
Burning Notes
E. (you have to imagine all of Wheelmaster Harald's dialogue in a...sort of...halting...but precise...eurovoice)
Harald: "So, in Burning Seas all of the seas are burning."
"That makes total burning sense."
"The clarity. It burns."
F. These are the experience point notes. Why did I put an "F" here? Who cares? I got xp for killing some ghosts. Like you care.
G. Oh, I defeated them with Calligraphy. In Burning Wheel you can bring in any skills that you can justify to add to your roles. (Or at least in Badwrong Wheel you can.) Anyway I patiently explained to these ghosts that their 300-year-old tragedy was totally like enshrined forever in the memory of the people of the land of rain and blossoms because the very ideogram we use for "tragedy" actually includes their family name. So they should totally stop psychically attacking me because I like understand their pain and aiding the Impetuous Lotus clan in spreading order and civilization to these benighted lands is totally getting their guy in the big house. I got an extra die and they totally bought it.
H. Shaking Eye King kept singing the song of predicting the weather, which in BW mechanics means he can actually decide the weather and he kept picking Torrential Downpour. At one point Takahachi was all
(gruff samurai voice) "Exalted Eye King, can you not make the weather more pleasant?"
SEK: (limp wafting drama-elf voice) "I do not control the weather, I merely predict it. I ask the season what it may bring."
Impetuous Lotus Peril: (Zoltar from G-Force voice) "Liar! I saw you picking!"
SEK: "I do not pick the weather, my player picks the weather, it is an extradiegetic mechanic allowing...."
ILP: "Silence elf! There is no significant difference between traditional role-playing game mechanics and those popularized in recent years which enable enhanced player control over the narrative! The Sublime Imperial Grandmaster of the Impetuous Lotus will have none of your divisive tribalism!"
Then we all laughed and smiled.
Because life is good and playing games wrong is really fun.
Burning Analysis:
Thus far the idea that everybody is a little bit the GM is totally holding true and one consequence of this is every player has to be careful not to spotlight-hog. It's pretty easy, at least so far, to have somebody do almost nothing for an hour--the whole ghost-fight was like just me and Cole. I mean, I'm sure some people are into just watching the theater-of-it kind of storygamingness but I think this particular campaign we here are playing with these people is going to be more fun the more people we can get into the mix at once.
Harald the Burnmaster stuck in the following rule from another game for the witch/acupuncturist which is a pretty decent fortunetelling mechanic, in his words:
"My augury rule is to give the prophet bonus dice to distribute on attempts to reach the stated prophecy on a successful prophecy"
_____
*Dear Eye of Pedantry: Yes, it's a terribly problematic phrase. We're all real broken up about.

Thank you Cole! Now I just need to do it more.. lol.

Is it the Gort of Eustace voice?

Sooo... I think I want to get in on a Burning Wheel game after reading this little series.. Embrace my inner... Something-rather?

I can't help but think these characters seem like an awful lot of fun to play with.

I need to work on the visuals/vividness of the NPCs very obviously (-:

Did you use a Duel of Wits (or Fight) against the ghosts or a simple roll?
Also, the weather part was utterly brilliant :-D
Totally worth a fate point, imho!

This is pretty fantastic.

Trent B - count me in... my experiences with GMing BW Mouseguard left me far from impressed, but I wouldn't mind giving it ago as a player with someone who knows what they're doing.

as in I would give it a red hot go, yo