More Tarot Rooms for your dungeon which if you don't know what I'm talking about it's here. 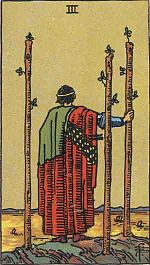 Three of Wands Room--The golem stands, palm out, between three upright quarterstaffs. If any object is placed in the palm, the golem will take it and offer a quarterstaff in trade. Furthermore, at this point, the Three of Wands Golem will then immediately begin to build a business based around the item it was handed. It will seek to buy, sell, import, export or trade that and only that kind of item, using whatever resources it can locate in the dungeon. It has stats as a 3rd level wizard and its intelligence is 3d6+3. If the PCs visit again, they will likely notice the golem has developed a thriving business, staffed by whateve creatures are at hand in the dungeon.

If any 3rd level wizards are present when the room is opened, the golem will offer the wizard(s), in writing, a chance for a 1/3 share in the partnership in exchange for undertaking various tasks related to the new business. These will be dangerous, but the golem is honest. 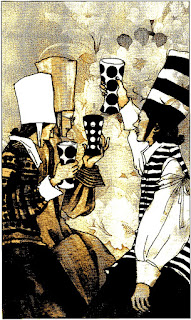 Three of Cups Room--These golems in this room are carved to represent 3 hot drunk chicks. They will motion for any visitors to join them and offer them as much wine as they like. Once the door is open, it will never close and any creature wandering nearby will be offered drink by what essentially is an endless magic fountain in the shape of 3 convivial girls.

If any 3rd level clerics are present when the room is opened, then the tall, skinny blonde one will flirt with them (regardless of gender). She will eventually become hopelessy infatuated with the cleric(s) bringing them fried chicken on their birthday and writing them long letters about how they used to wish they could be a cleric but they eventually realized it was a meaningless title and was happy just being a wooden nun but is still really impressed with the cleric(s). She'll be really possessive, want the cleric to move in as soon as possible, and constantly write about how she wants to have her face re-carved when she gets older. 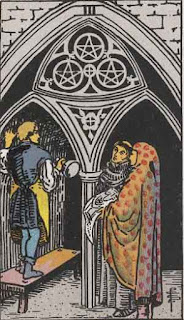 Three of Coins Room--The mannequins in this painstakingly crafted tableau will not move while observed. However, if left alone with any object, they will go to work improving it. Any nonliving thing left in their presence will be heartily pimped when the owner returns.

If any third level thieves enter the room, they golems draw for them a map of a nearby raggedy object in the care of a hostile sentient being. If stolen, left in the care of the golems, and improved, the object will then be worth twice the original value. They will otherwise behave as normal. 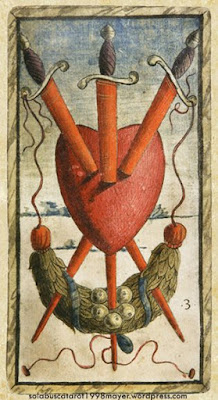 Three of Swords Room--A vast and very real heart of genuine levitating flesh pulses redly in the air, pierced three ways by swords, as blood drips and then pools beneath. If any sword is removed, blood will jet out, filling the level (and only that level) at a rate of 3 inches per turn per sword removed. When the blood reaches 9 inches, it will spawn three red demons of sorrow in the rooms of the other 3 suit cards on the level. These demons will seek the swords wherever they are, then use them to grievously wound all they can, inflicting terrible, mutilations that can never heal.

Other than the demons, only third-level fighters possess the mix of skill, caution, and humility to be able to wield the swords, and in their hands they will inflict wounds that can never heal once every three days. Anyone else who attempts to fight with them will fumble and hurt themselves. 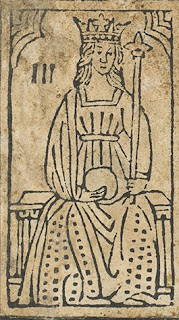 The Empress Room--The secret door to this room can only be found by women (though anyone may enter). The Empress sits unmoving, crudely carved in an intricate but primitive style, on a stepped pedestal under a gazebo-like roof, with a drawer in her stomach. Opening the drawer will reveal a newborn child of a random humanoid species found in the dungeon, bathing in amniotic fluid. Closing it and opening it again will reveal a child of another random species. The children are-, and will behave as-, infants of the indicated species.

In addition, any immature living thing--animal, vegetable or monstrous--within the room will begin to grow at the the rate of 1 year per minute until it becomes an adult--at which point it will age normally.

If any mother is present, the empress will stand and hand any child so generated to the mother, along with an ivory box containing a deed to a parcel of 3 acres of land within 100 miles, a map to that place, and everything necessary to keep the child fed, tended and clean for one week. So long as the child is tended, the deed will be honored by any intelligent being of lawful alignment. If the mother takes the deed, after one year, the Empress will send a wooden emissary with a scroll asking the mother and/or child to join her army as she retakes her lost empire. 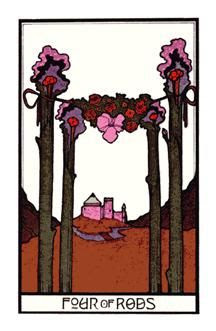 Four of Wands Room--This tableau's major feature is a sacred or celebratory space marked out by four standing staves int he corners. Any creature entering will be compelled (no save) to coexist peacefully and indeed festively with any other creature inside. In addition--no-one standing behind the painted wooden castle in the background can be harmed in any way.

If any fourth-level wizards stand in the space, any beneficial spell they cast will be increased fourfold.

Four of Cups Room--This room contains four cups and an aura of general shabbiness. Anyone spending more than a round in the room will be compelled to ask themselves four questions:
1. What am I even doing here?
2. Why?
3. Why?
4. Why?

If after any of these questions, the PC responds with "I don't know" or takes more than 4 seconds to answer, they will be compelled to drink from one of the cups. This will result in a nightmarish hangover (-1 to everything) and they will have to go four more "Why"s down the rabbit hole. Again: if they do it wrong they'll have to drink from another cup, get another -1 etc. If they drink all 4 cups they will sleep for an hour. The cups refill immediately.

If any fourth level clerics enter the room they will immediately be compelled to drink all 4 cups and answer the corresponding questions. If they answer each one unhesitatingly and with perfect orthodoxy within their faith's dogma, they will immediately gain enough experience to reach the next level. No one else will have to drink. Four of Coins Room--A simple golem closely resembling Ben Horn from Twin Peaks without his glasses sits clutching four massive coins worth 4000 gp each (he wears a crown but it's fake gold). If any are taken the contraption's mouth will open and it will issue a gut-curdling shriek which will trigger one random encounter check per round per coin taken.

Only a fourth level thief can disarm, detect or destroy the mechanism. There is no other way to hurt it and no way to stop the sound (even Silence will not work). 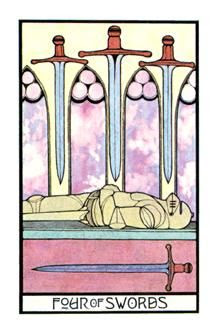 Four of Swords Room--This place is a tomb. Funeral plinths rise from the marble floor and 4 swords are hung on the walls. No harm can come to those who sleep here while they rest--the dead will rise from their sarcophagi, take up the swords and protect them unfailingly for eight hours.

If any fourth-level fighters die in the dungeon, their soulless bodies will arise and crawl here, to join the ranks of the invincible dead. 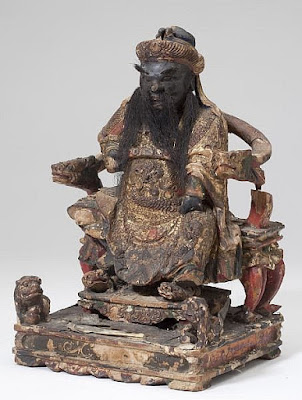 The Emperor Room--The door to this room is secret, but just barely. Passive perception checks will reveal its outline behind a desultory attempt to paint it the color of the wall. The room itself is lavish and pompous beyond all necessity, surrounding a wooden emperor, enthroned. As soon as the door is opened, a scroll will drop from a slot in the emperor's belly containing a demand (in the reader's language) to perform a task in the dungeon, one that will extend the emperor's dominions--often by compromising or killing another powerful male figure in the dungeon (especially Kings of the various suits). If the creatures present do not perform the task immediately, the room will flood with a toxic red gas, requiring causing 4d4 points of damage (save at -4). After any task is finished, the emperor will give the creature 4 gold pieces (from the same slot in its belly) and another task will be issued. The emperor cannot be moved or harmed by any means. In all likelihood, there will already be at least one faction in the dungeon carrying out the emperor's demands when the PCs find it.

If any fathers are present when the room is opened, the emperor will cast a Quest spell on them and demand (via scroll) that they bring to him one of his enemies in the dungeon, alive. When the task is done he will give them 4000gp.
-
-
-

Really dope. Running a group right now where this would go over really well. Looking forward to see what you do with the other major arcana.

Any hope of continuing this? This is dope as hell.