--Veins of the Earth

First was a low buzz of back-and-forth emails and phone calls from different game companies that wanted me to work for them. The details kept being different, but the exchanges all had a theme: We'd love to work with you on x.

But then: if you would just agree to please compromise and make the game slightly worse.

I said "no" a lot. I would rather make the thing I wanted and believed in and would play myself for Patreon money than make a kind of wax-melted shape kinda like what I wanted for grown-up money (and trust me, you would rather I did it, too). But, yeah, it would've been nice.

The second was noticing an old 3.5 D&D era interview I'd saved on my hard-drive with Mike Mearls at D&D where they asked what he'd like to get rid of in the game and he just immediately shot out: "Bards". This is the best case scenario for a future in mainstream RPGs: you become the boss of the biggest RPG in the world and you still can't get rid of bards after two editions.

The third was more pleasant: I had my copy of Veins of the Earth and I was paging through it, just liking it, thinking how it had gone a step further than Fire on the Velvet Horizon--you got Scrap's art, which is trying to exist right on that line between acid scribble and awful primordial psychosis revelation, and then you've got Patrick's text, which is saying it's definitely awful primordial psychosis revelation, and then going one more than Velvet does by describing and quantifying what world is being awfully and psychotically revealed.

I won't, yet, probably, write that critical essay about The Epiphanic-Cthonic Theme in the Evolution of Scrap, or Patrick or Scraptrick--I'm too close to it, I've slept on her couch and I've gotten his Christmas presents--but my point here is: someone could.

Someone eventually might, because these things are piling up, and get interesting.

There is a body of work there--and you can talk about what is and isn't in it. As also there is a body of work for Noisms (you could write "Exoticism, Travel, and Alternate Etiquettes in the work of Noisms"), Jeff ( "Squeezing Minimalism: Enabling Creation Through Stupid"), and also for Michael Curtis, and James Raggi, and Rob Conley and lots of people I haven't read and don't know anything about and everyone else in independent games.

Now you could do that with any game thing, but in a lot of them you won't get too far, because you run into the problem I had with The Slaying Stone: How much of this was put here on purpose and how much of it had to be here because someone other than the author decide it did? Mearls can't even get rid of bards.

I have a lot of fun deep-diving old modules, and sometimes I think "Well why not take one of these authors and read that single author across companies, systems, settings and see what emerges?" and I try and it's boring and feels pointless and repetitive and reaching like trying to work up a psychological profile out of the way someone drives a bus route. Ah, they chose spiked clubs for the goblins instead of maces! See the way Bonner's imagination tends toward the perforative. There's so much crust on there.

You can do it with the early stuff from the first wave of inventors early on--Arneson, Gygax, Stafford, Jacquays, Ken St Andre, etc--there's a touch there, but after a while, in the second wave, even for very good writers, it stops being possible. With all the big and hyped properties there's a tremendous sense of What People Want. Even Vincent Baker, a tiny little cottage industry, has admitted to putting certain things in AW just so parts of the audience will complain about them and make a buzz.

I've been privy to some of the meetings: you really do have very good people, very smart writers, saying "Let's do this!" and someone else goes "Whoa, gorgeous!!!" and you really do have a guy going "The fans won't like that" and it doesn't get done. And so the thing gets crust on it. The most popular properties in RPGs now have decades of crust on them.

Many new mainstream properties crust instantly--a good writer pitches a game they'd never play at home using an existing formula or system, they write it completely competently, adding no new idea about what you could do in a game or help to run it, they're professional, they collect their check. They only ever play it ever again at cons. What's invented in the game is only what's necessary to shift it to the new genre.

The crust has benefits:

-There is a kind of crust lets you sell things to children, or at least people who have them

-There is a kind of crust that lets you budget right, by letting you know how many copies of this kind of thing you will sell because it is like other things

-There is a kind of crust that lets you nab a big, licensed property, and give the people who like it what they expect

...and if you're full-time in this business, those things have real benefits. I don't blame anyone for going that way if they have no other source of income, and those games have their uses.

DIY RPGers aren't just making a sort of lo-fi alternate version of what the mainstream RPG business is doing--you look at something like Veins or Broodmother Skyfortress and you see they're doing something that otherwise doesn't exist. Yes, there's monsters, yes, there's advice, but if you get to it after a stack of Pathfinder modules, you know you haven't seen a text that committed and that much itself and that much that suggests a new thing you, a person, could do in a long time. These are new kinds of books. 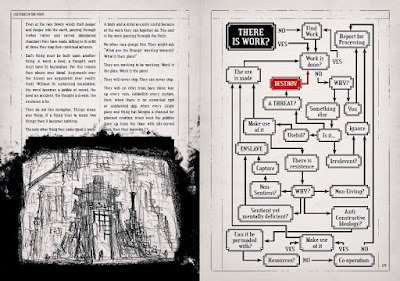 To be invited into a world by a person with a voice. To feel that voice telling you the story of that world, to see them use every tool in the book to try to get you to see that new world they way they do, to inject that world into your mind so that then putting your friends through it becomes second-nature, because it was luxurious and intimate to read and it was a real experience, so it's there, burned in like a Vancian formula, animated by its own energies.

I keep getting to write exactly what I want and draw exactly what I want and it is laid out exactly the way I think it should be--and that's not a very common experience in RPG land. Like them or not, when you buy these things coming out these days you are reading completely uncompromised expressions. Nobody in the credits of your deluxe mainline full-size hardcovers is doing that.

That's something that will die with us when we (with our perverse attachment to this stupid hobby) are gone. And we are only here because you specifically reading this happen to like this specific thing. This isn't a stage in some other process, this is it: these niche niche niche things are there and the only "up" the larger world will offer is a chance to do more compromised work.  The endgame isn't WOTC hires Jeff as creative director and he gets rid of bards, there won't be a live-action Veins of the Earth TV show on the BBC.

The things we're making here now? This is it, this is the thing the author wanted to make, and this is the strange economy that, strangely and probably temporarily, is supporting it. And it is better than what you'll get when they offer us a bunch of money. The Dvargir of DIY D&D don't leave the mines toward some above-ground apotheosis: this work is the plan, this work is the point.

So: support Yoon-Suin, support Veins and Broodmother, support James at LotFP and Hydra Co-Operative and, yeah, support Demon City and support everyone else doing this, and tell people you did and tell them about it. Because when you stop, it stops.

This was very interesting. Also I will be smiling at that perforative turn for a couple of hours at least.

I bought the last big hardcover WotC module on a whim and was really disappointed... because the quality and table-friendly-ness of OSR stuff had spoiled me. Seriously.

Same. I find myself grabbing "A Red and Pleasant Land" just to read for enjoyment. Money well spent!