A lot of game masters have experience with dungeons but have trouble writing investigation or horror adventures--especially ones that aren't railroady--and very few pre-written commercial modules help with that.

Here's a way to write investigations and visualize how they work for yourself--it combines the idea of a Hunter/Hunted investigation set-up with the idea of the criminal conspiracy organizational charts cops use--(which Ken Hite calls a "conspiramid" in Night's Black Agents. This is a step or two more complex and concrete.).

It visualizes the possibilities in an investigation as a dungeon: 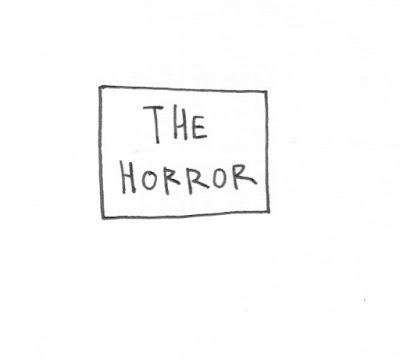 So, first, you have The Horror--this is the final boss, the supernatural or at least bizarre thing that is revealed after all the investigating is done. You probably already have in mind what that is. Imagine it as occupying a room in the center of a dungeon. 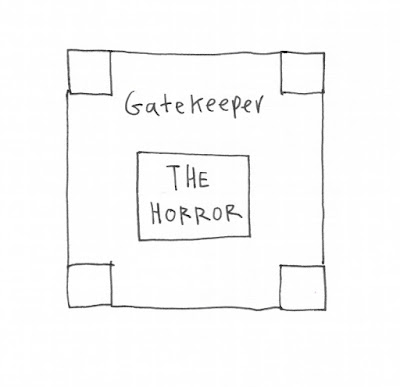 Around that you have the "Gatekeeper"--this is the NPC or the building or whatever that you encounter right before the final horror. This could be the crime boss who keeps the werewolf in his basement or the cultist wizard that summons Cthulhu or, yes, like Dana in Ghostbusters who brings forth Gozer.

The point of the Gatekeeper is they are a mundane front that, once encountered, triggers the appearance of the horror.

Picture the Gatekeeper as occupying a set of halls around the Horror. You can move through those walls when investigation reveals new information. Think of information as literally the key. You unlock the adjacent "room" with information.

Don't worry about those little rooms in the corners yet, they'll be explained in a second. They're an important difference between this and the simple conspiracy pyramid. 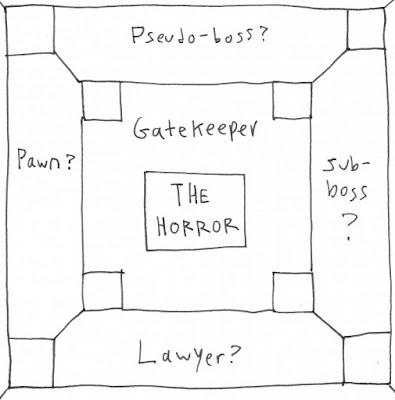 So outside the Gatekeeper's room we have other connecting rooms that the PCs have to get through before they have enough information to get to the boss.

I put some examples: a pawn of the boss, their lawyer, etc. You can also move laterally, like investigating the boss' lawyer might lead the PCs to the sub-boss, etc. This is fine. The point is whatever they're doing be fun, not that it be efficient.

You can wrap the center in as many layers of these adjacent "buffers" as you want. 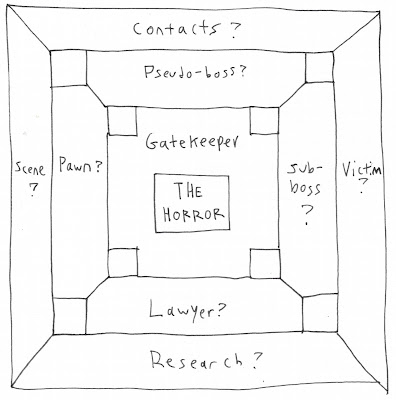 The outer layer of "buffers" are the first things the players can do when investigating the situation. Imagine the PCs beginning outside and moving inward. In this example, the players can interview the victim directly, search the crime scene, do research on the place where the crime took place (like in the library or on the web), or ask their contacts about it.

Different "entrances" lead to different parts of the conspiracy. 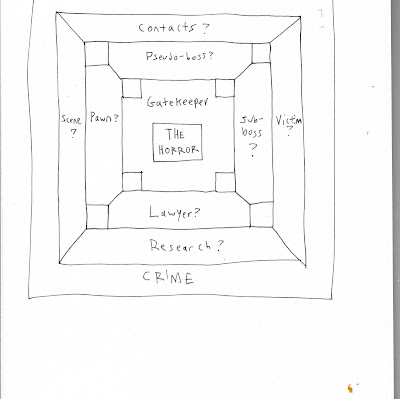 The outermost ring is the "room" where players start--discovering there is a crime to solve.

The orange spot in the lower right is some pizza cheese stuck on my scanner. It's not that important. 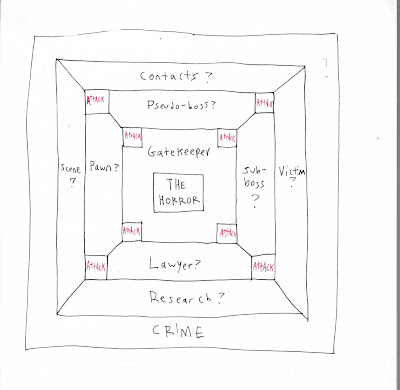 I haven't yet talked about those little boxes in the corners. These are kind of "secret rooms".

These are where the dangerous people and things associated with the crime lurk. They do two things:

A) They attack the investigators if they get stalled in their investigation. This keeps the game moving.

For more detail on how and why this works, check out Hunter/Hunted. This is the most important difference between this and a simple conspiracy pyramid. 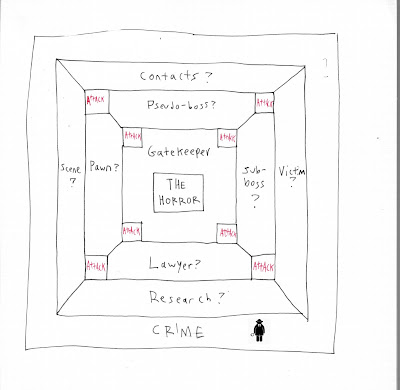 Our investigators start out having heard of the suspicious decapitation of Bunny Monrovia, cherished uncle. 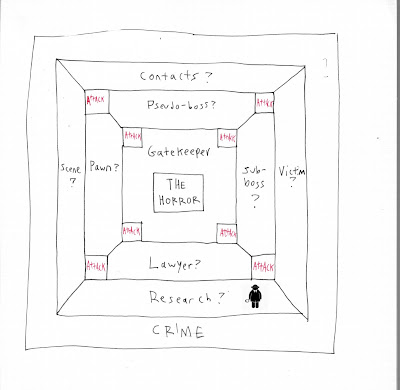 They begin to comb through the internet, looking for information about Bunny's work and possible enemies he might've made in the experimental entomology business. 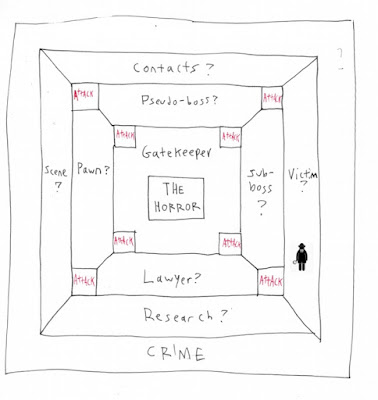 They figure they'll interview Bunny's wife, Capybara Monrovia (victim), she tells them Bunny's best friend was Sweetwater Baize, a kindly fellow who helped Bunny out and always brought Jelly Bellies for the twins. 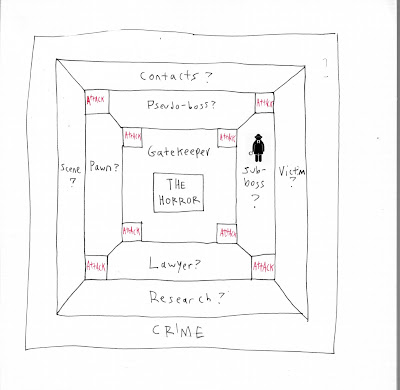 Sweetwater Baize warmly welcomes the PCs into his abode.

They can tell he's hiding something but don't manage to question Sweetwater's suspicious butler, much less sneak upstairs and find the hideous mantis creature that once was Sweetwater's sister or figure out anything much about Sweetwater.

Dinner seems to drag on, the GM is getting restless. 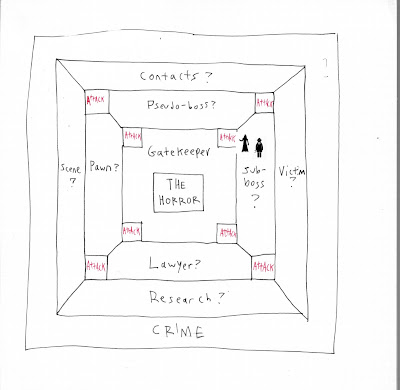 So out of the "attack" box the GM conjures the Mantis Cultists, who Sweetwater calls in to deal with these meddling kids. They strike hard... 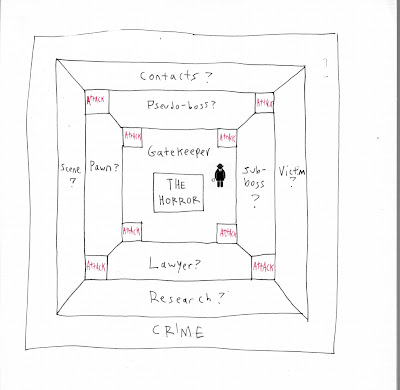 ...but not hard enough. The players defeat them, learning in the process that the mysterious butler was actually the head of the mantis cult.

The players can now confront him (the Gatekeeper) and he can unleash the hideous beast (The Horror). 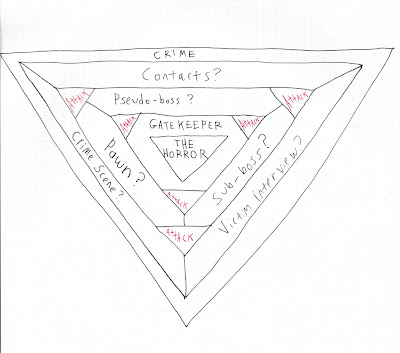 To walk you through the analogy with a dungeon a little clearer, I made the actual investigation more complicated than it needed to be.

This "dungeon" is the same structure but a little simpler for a GM to write--it has 3 initial methods of investigation and only 3 kinds of buffers between the crime and the Gatekeeper.

To create a whole campaign, imagine this is the top view of a stepped pyramid seen from a helicopter--all you have to do is add more "steps" to the pyramid.

This was dope, and reminds me of a lot of the conceptual models I had to learn/will continue to learn about with more graduate education. I like to make models like this for my own games as well.

Cool stuff and useful! I like how it forces you to build a consistent situation that the players can explore instead of a set of linked scenes.

Hope to see you expand on this more - for instance, advice on when to trigger an attack box? When the session slumps, when characters cross the edge between two sections of a layer,...?

Bravo! I have always steered clear of investigation and horror because most of it is linear(railroady) as heck. You're design approach gives me some better options.

I just backed Demon City based on this post alone. Love this idea and will be using it as of tonight.