Usually on Retropost Weekends I put up a post that's old and didn't get read that much because it, too, was put up on a weekend. This time, however I thought I'd put up one that actually got passed around quite a bit. Because it's funny.

Also note, playing Burning Wheel wrong was so fun we kept doing it for like 3 more sessions. 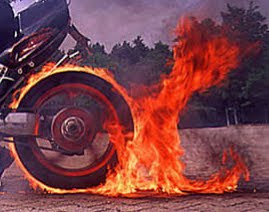 Note: Oh dear, somehow this has gotten linked to a Burning Wheel forum under the heading "

...which I find baffling. Other than the internet connection cutting out at the end, it went fine and was fun.

Unsurprisingly, the same thing happened when we played 4e--I said it was fun and I would like to play again and some kind of internet brain damage kicked in and people read it as "it wasn't fun and I won't play again". People are dumb as toast.

So we tried Burning Wheel*

(Harald) GM: So there's a village and the Duchess is sending you out because there are demons there and it's disrupting the trade route...

Zak (Sorceress): So wait, she's worried about it disrupting trade but not about like all these villagers?

GM: Well, you know she's a Duchess and so is above the hoi polloi and she doesn't really care but...

Cole (Elf): Does that trigger my elven Grief that she's so callous to the plight of these poor villagers?

GM: You could roll for Grief if...

Z: Well what if I like say to the Duchess like, hey, you gotta kinda y'know wink wink like you're really worried about these poor orphans because, these elves, they're sensitive...

GM: Well she has some Falsehood, so... (roll roll) Ok, you are convinced it's all about the orphans and their plight. Is there anything else you want to do before you go?

Z: Yeah, aaaand a grappling hook, and a net and a rope and...

C: And lard! I heard you humans have uses for this substance.

GM: Well this would be a resources check...

Z: Yeah and there's like 3 circles for debt and taxes and...

GM: Well you can try to get someone to lend you the money...

C: I have Oratory--Can I like make a speech in the public square urging the citizenry to fund our expedition?

Z: We can help if we have related skills, right? I have Rhetoric, I'll be like "make aaaaan...Ethical Appeal aaaand...an Argumentum Ad Demonium and...Oh and I have Falsehood, can I tell him to be like 'Oh this Sorceress' poor uncle was gnawed upon by demons...'

C: Yeah, I see your crude falsehood and it makes me Sad.

C: Anyway I make a speech.

Z: Tell them our Stretch Goal is a ten-foot pole.

GM: Ok, well you get a rope and a big barrel of lard.

Z: Excellent! Dwarf: strap this barrel to your back it will amuse me.

C: Friends! I will carry the lard!

GM: So, elf, you sing the Song of Paths?

GM: You're lost. Dwarf, sorceress, you see the elf is missing and there is a trail of lard...

D: We pursue him.

Z: And it rises in the East and sets in the West?

Z: Ok, so yeah, friend Elf, simply walk away from your shadow in the morning.

C: Yes, well, in the land of Elfheim it is a perpetual dusky rose colored sunset so...

GM: Is the song Beautiful?

Z: Wait, if it's Beautiful the Dwarf will like try to eat it, right because of Dwarven Greed right? It's not Beautiful.

C: Well I am learning in the human world that sometimes things are not Beautiful but they are Useful.

Z: Yeah, "Walk This Way" the song of the Arrowsmiths. It's not beautiful, it's just y'know, if you're driving a truck and it comes on the radio it keeps you awake.

C: We have no trucks in the Elven lands, we all ride on magic deers that...

Z: Yeah, I mean carts I mean...Anyway follow us.

C: Of course! Lead the way!

GM: Ok you come to near the village but you are not there yet because the elf got lost so you have to camp. And you see this most beautiful white deer you have ever seen...

M: I chase after it.

GM: What do you want to do with it?

M: I guess I want to...I want to chase it away from the demons.

GM: So you don't want to possess it?

GM: It runs off into the forest.

C: Shall I retrieve him?

Z: Uh...that depends...is it gonna like give you a panic attack, friend Elf?

C: I will pursue! On my long and striding legs!

C: You do not seek to pursue and frolic with the beasts of the wild?

Z: Uh, you think he's, like, frolicking with it?

C: Of course! It is a magnificent beast! Hold, soon I'll return.

GM: Ok, you get the dwarf back and enter the village...

and then there were some villagers and they were lying and that made the elf Sad again and they tried to lock him in a closet and then we talked to a guy and then his wife stabbed him and Mandy tried to Persuade her to get off and I tried to add my Rhetoric Skill to that like "Hey, really get off" and some Prometheus goo came out of her nose and everyone was Shocked and then there was a bear with no eyes and then the G+ connection got all screwed up because Harald was in a hotel.
-
-
-
Original post with hilarious comments here.
-
-
-

Do you think that there is any onus on a developer to refit their game if the mechanics don't quite line up with the design intent?

Like say I go out in the world and make a game about horror and it ends up being measurably fun for my audience, but it is measurably fun for them when they play it as a game of humor. I look at this situation and feel dissonance. I feel a bit like a failure. This is unpleasant, so I set about trying to resolve said dissonance.

So one resolution might be to look at results divorced from expectations: "ok good people are using my game and improving their mood, so c'est la vie". Or I might quietly tinker at it and release a new version with words explaining why I did so, even if such revisions indirectly condemn the aforementioned fun-having groups.

The one thing that is clear is that you think actively telling folks about how a game is meant to be played is both condescending and lacking in decency.

I don't mean to cast aspersions on either BW or BW-play. But the comments from the original post prompted thoughts.

"Do you think that there is any onus on a developer to refit their game if the mechanics don't quite line up with the design intent?"

I mean it may feel bad for the developer's ego on some abstract level but it's pretty egotistical to care more about people far away HAVING FUN THE WAY YOUUU INTENDED than just being happy something you did made them happy.

Forgies don't think this way though, they worshipped "design intent" because it allowed them to make their subjective experiences of not liking D&D and Vampire etc into seemingly objective complaints "The experience did not match (my guess years later about) the design intent!!!!!"


If people like it, the only reason to care if the game is working the way it's intended is if you the designer are actually at the table playing.

Some of my friends would make jokes even in very stressful situations in real life.

So...how do you get to that ego-less state, when you design games?

For example, you wrote Red and Pleasant Land and clearly have some ideas on ways to use it - you even have a segment on "how to use this book". You formatted it with great care to be easy to use. I know, I've used it. It was easy to do so. There was this very sinister/weird/whimsical feel to it, which clearly you put in work to convey.

I don't think it's hyperbole to say you care more than most about how the book looks and how it is used. You talk about games and what they're for and how they can be made to be more for that thing.

Do you just drop those considerations upon publication, because your game is in the wild now? I dunno if my question is impolite or unclear, but I guess while yes, I get what you're saying on one level, it remains non-intuitive on many others.

What is the thought combination, such that you remain consistent throughout? A.k.a. "I'm a person who really cares about design intent and making this game with the player usage in mind and hopefully giving them a certain experience I have catered for them _but_ I'm also a person who if they play it completely counter to what I'd planned, well that's success too."

I dunno. Maybe a part of my brain is just on auto-asshole mode and that's why I can't get past this block. By your definition of asshole/ego, at least.

That is what we do here.

To answer your question:

I talk about how to make bicycles because that is what I like and know how to do. It is where my enthusiasm and expertise lies.

If someone wants to take those parts and make a bunch of paperweights, it's no skin off my nose.

The important thing is only that they enjoy themselves.

However, if someone goes "THIS THINGS SUCKS AS A PAPERWEIGHT ITS GOT SPINNY WHEELS AND IS TOO BIG FOR MY DESK!!!" then you bet I am going to point out it's not meant to be a paperweight and explain how I use it.

The analogy is simultaneously whimsically unexpected and I guess helpful after the whiplash. XD

Will mull it over for future use, see if with enough mulling I can get it to resonate. Thanks.