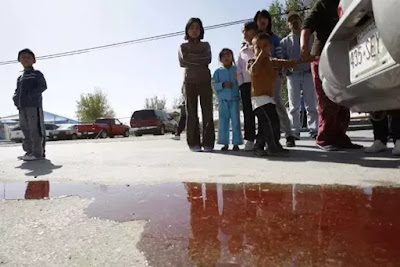 For Demon City, but broadly useful

1, Stabbed in the neck with a hatpin
2, Laughed to death at the news—cardiac arrest
3, Beaten with a Bible
4, Drowned under a solar swimming pool cover
5, Ripped apart by dogs
6, Drowned in liquid fat
7, Mercy-killed during late-stage rabies
8, Burned alive in an otherwise untouched scene
9, Died of shock after looking in a mirror
10, Brain hernia after drinking too much orange soda
11, Starvation after refusing to eat anything not from Alpha Beta—a defunct supermaket chain
12, Hit by an ice cream truck
13, Elevator cable cut
14, Single shot through the floor from below
15, Strangled with her own bra
16, Suffocated in a coffin
17, Two victims—their medications switched
18, Blunt trauma as an exorcist attempts to “drive an evil spirit out”
19, Caught between a subway car and platform
20, Bitten by a snake curled in a sink drain
21, Fell into a jet engine
22, Stabbed with long forks and eaten
23, Ripped open by a shark as aquarium glass shatters
24, Cliffside road abruptly crumbles
25, Lunchroom suicide in a busy office
26, Drowned in a hotel-top water cistern
27, Strangled with a telephone charger
28, Electrocuted by headphones
29, Every man named “Mark Walsh” dies on the same day of apparently unrelated causes
30, Fallen off a building and landed on a movie marquee
31, Apparent suicide at a gun range
32, Clotheslined while riding a motorcycle
33, Crushed in a garbage truck
34, Woman convinced she is a lizard run over by a bus while crawling across the street
35, Drowned during intercourse
36, Impaled on the raised arm of an equestrian statue
37, Crushed in a trash compactor
38, Beaten to death in prison by father of victim’s own alleged victim
39, Choked to death, throat stuffed with frogs
40, Shot by a clown
41, Throat cut—clear attempt to perform the (anatomically impossible) ‘Columbian necktie’
42, Drowned in holy water
43, Child chewed its way out of mother’s stomach
44, Found bloated in the river, weighed down by a refrigerator
45, Set self on fire to protest a government ousted a year earlier
46, Sewn to another victim, starved to death—partially eaten by each other
47, Bisected in a surgical setting
48, Chained to a radiator until burned to death
49, Stabbed through the eye with an 8-inch heel
50, Choked on a pearl necklace
51, Locked in an oven
52, Poisoned by arsenic from an old taxidermied claw
53, Faces of victims peeled off and switched
54, Ritual murder with wooden masks in a Taco Bell after closing caught on cctv
55, Hole drilled in head with corkscrew
56, Eyes pulled out with tweezers and placed in a cup
57, Crushed under a Dig Dug machine
58, Filmed in prison on the other side of the world 3 hours ago, dead here now
59, Disabled and killed in the hospital by a nurse carrying a sack of knives
60, Found in a python’s belly
61, Found in a home completely identical to their own, but miles away
62, Starved to death locked in a closet off a busy elementary-school classroom
63, Fingers removed, bled to death from hands
64, Boiled alive inside an oil drum
65, Amputee has own claw-hand shoved down throat
66, Drawn and quartered by four Miatas
67, Sealed in a steel cage and thrown in the sea
68, Bitten by a decapitated snake head
69, Dropped in a decorative aquarium of box jellyfish
70, Cut cleanly in half with a circular saw
71, Heart removed by a trained surgeon
72, Covered in molasses and eaten by rats
73, Dropped in tar and run over
74, Parts of body found in widely-separated alligators
75, Belly pierced with sharpened chopsticks
76, Force-fed nails
77, Crucified by a yoga class
78, Skull-rupture filled with hatching baby spiders
79, Thrown through elevated train car window
80, Tied kinbaku-style with barbed wire
81, Head crushed in a vice
82, Sprayed with an aerosol bottle of cyanide
83, Starved after tongue melted to roof of mouth
84, Stomach filled with sharp filings, intestines torn by electromagnet
85, Teacher stabbed to death by students with pencils
86, Forced heroin overdose
87, Landmine under a mall parking lot
88, Killed by a thai delivery guy while a cam girl overheard through her screen via laptop in the next room
89, Found dead in a (decommissioned) electric chair
90, Strangled with pig intestines
91, Sigil-shaped area of torso completely removed, cut clean through
92, Upper facial area left frozen with liquid nitrogen, shattered by prying cat
93, City bus driver is shot, motive unknown, bus drives off a bridge overpass
94, Force fed C-4 charge
95, Retired Colonel dead in drawing room, poisoned tea. Found by underage mistress.
96, Puddle of acid near 4-way intersection, eats away tires causing pile-up
97, Stabbed with glass cake spatula
98, Pile of heads found under Chuck-E-Cheese ballpit
99, Wooden Christ on life-sized crucifix sawn off and replaced with human victim


100, Tied down and covered in scorpions 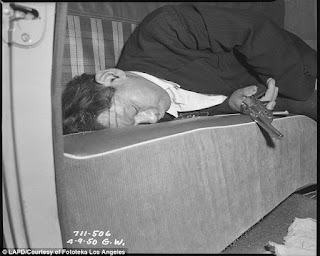