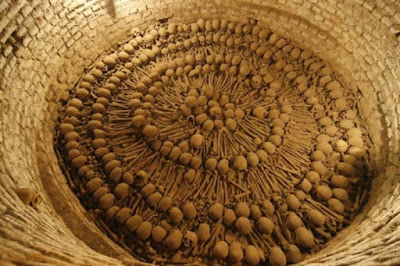 When it's time for you or the bad guy to perform a ritual the text might just be like "Hey wherever's clever" but rituals are notorious for making irritating demands, like:

a) You gotta be in this specific place here in this continent/hex/latitude-longitude (in which case that's a plot device all about where the GM wants the game to take place) or it might say...

b) You gotta be in a place with certain characteristics.

If b, roll on the table below. This list is skewed toward places more likely found in an urban setting (not so many sheer cliffs and volcano edges) so I can use it in Demon City but there's probably enough here that you can trade out 10-15 of them and make it your own for whatever campaign.

1, A fortress never taken
2, A place reclaimed by green things
3, A tomb without a body
4, Where none have died
5, Where two-hundred and nine have died
6, A desecrated church
7, A dethroned king’s home
8, Where 13 died by fire 15 years ago
9, Where a nun has drowned
10, A circle of white elms
11, Where a great battle was once fought
12, A place of witch-burning
13, A hidden place, known only to seven souls
14, A place of standing stones
15, A peak with a view of an ocean and a valley
16, Where the northern lights were seen not 5 days before
17, The last home of 9 brothers
18, A cold peak
19, A place dark but warm, where echoes can be heard
20, A frozen lake
21, A place consecrated to ignored gods
22, A place of prophecy
23, A place without vermin or growing things
24, A river without fish
25, A place of executions
26, A house that has sunk beneath the sea
27, A place of buried animals
28, A home to spiders
29, A room with iron walls
30, A circular dais
31, Beneath the sea
32, A saint’s crypt
33, A place of desperation, where fortunes are lost on games of chance
34, Where at least 99 marriages have begun and then failed
35, Where 50 rituals have been performed before
36, A structure standing at least 600 feet above the ground
37, The site of a nuclear explosion
38, Where the radiation reading is at least 200 mSv
39, A place diseased and so abandoned
40, The last home of a rat king, died happy
41, Between two places of unmarked graves
42, Equidistant from three rivers
43, An ossuary with the bones of a killer, a kind man, three slaves and a beast
44, A waterway that has never seen the sun
45, Where 5 roads come together
46, A place with poisoned water
47, Where the wind can be heard but not felt
48, A swamp forest, beneath alders or willows
49, A great city's geographic center
50, A house owned by two wicked men and then a widow
51, Where a prisoner slew a jailer
52, Where unused gallows stand
53, A garden where nothing grows
54, Where birds eat corpses
55, A windowless church
56, A nameless street with seven houses
57, Where animals eat their own
58, A place with 700 stones
59, A room of ice
60, A room with 8 walls
61, A place of 5 revenges
62, A cannibal’s home
63, Beneath a dead oak no less than 20 feet tall
64, A flooded room
65, Two places, simultaneously, on opposite ends of the Earth
66, A prince’s only home
67, A cave never before seen
68, A derelict vessel, veteran of four seas
69, The site of a future massacre
70, Where the dead are buried five deep
71, Where a wolf has slain a stag
72, A place with a puzzle unsolved
73, A place without steel or glass
74, On disputed territory
75, Where a bishop has died
76, Where children drown
77, On a slope facing east
78, On an island devoid of inhabitants
79, The oldest place of worship inside city
80, In a lucid dream, one step each night
81, A place that has seen one suicide a year
82, A bridge between warring factions
83, On dueling ground where friend has slain friend
84, A liar’s palace
85, A snow-covered river
86, A scavenger’s lair
87, A place lit only by fire
88, A place of total silence
89, Where lightning has struck
90, Where women without mercy pray
91, A place never owned
92, A place built by the caster, with no other hand
93, A structure with many walls but without nails
94, A place with 6 ghosts
95, Where a thousand died of hunger
96, A place destroyed by winds
97, A place of ignorance, where the caster is not known
98, A burned place
99, A place from which the sun glows green as it sets

I was reading through your "Must...Organize...Useless...Ideas..." post and going through goodies and oldies, so I have a somewhat off-topic question I'm not sure where to ask:

Of all the games you've played, what do you still reference semi-regularly? I'll leave you to define that, and I'm only asking that way because I suspect if you list every game you ever played, it'd be its own blog post. And maybe that would be a cool blog post, if you just talked about design things you got from different games.

But I'm curious - have you just played everything, or do you read games and have played enough to understand those games without playing them?

I haven't nearly played everything (though Im willing to try most games). I played a lot, but there are a lot of online folks who buy everything that comes out.

I barely ever buy anything. I usually run games I like (D&D, Cthulhu, FASERIP) and play games other people offer to run, but there are a lot of people with a wayyyyy more extensive knowledge of the variety of things that've come out than me.

As far as designing new stuff goes, I probably take stuff from a pool of about 10-12 games.

I definitely look back at them carefully when designing a new thing that is close to them in some way.