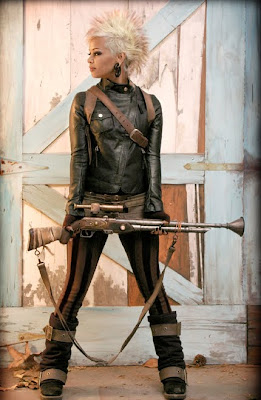 Connie and I are going to a friend's house to play a Type IV game today.

Connie is probably not awake yet, but says she'll pick me up in an hour.

Connie doesn't have a character yet.

We don't have time today to sit around making a character before rolling.

So: if you post a 1st-level 4th ed character below, or a link to one, Connie just might play it today.

And you will earn her eternal gratitude.

Connie has played mostly rogues, though I think she might go ranger or barbarian or something. And she's definitely pro-demihuman.

I gotta go take a shower and get ready and all, so I can't answer any questions, but there you go.
_________
Bitching about 4e will be pre-emptively considered boring. C'est magnifique mais ce n'est pas le Gary. Ok, we know. That's what our pal feels like running today.
_________
Addendum:

A fighter, rogue, to the prestige class of Lasher with a focus on knowledge history. Primary whips. Named (Indiana) Jonesie. Unrelated but relevant picture of "Jonesie" http://imgur.com/0i7dz.jpg

Here - downloadable link to a zip file with a bunch of characters from my old online 4e game.

May I recommend Malganis or Bruno, for Connie's playing pleasure. Malginis is a bit of a slippery sort, but Bruno is "I hit it with my axe", which is apropos, considering.

My all time favorite character was a cross between a Drow, (daddy was Jarlaxle) and an Avarian. Now, how that came about is a long story, the point is, she was a fighter/thief, with a 2-1 ratio, and she looked exactly like a drow (even lavender eyes) but had black feather wings. Her claustrophobia did not set in unless she sat still for long periods of time in the Underdark. As such, she never sits still, is always looking for adventure, loves pushing peoples buttons and is generally up for anything. She had a mistrust of most things magic, and would of course use magical or enchanted items, but when something went wrong, magic was usually the first things she blamed. Her name was Maia.

A Tiefling Assassin with a Greatsword.

An assassin with a greatsword doesn't make sense, but they do when you consider how 4e is played.

The only first level character I still have lying around is my goblin rogue. Some GMs may not allow a goblin character, although it's technically rules-legal. You can download him here.

I've put it in a zip file, but let me know if that doesn't work. It's an .htm character sheet generated by this site, so it's not the prettiest thing, but it did the job.

Oh, and it's from the early days of D&D4, before all the errata, so I don't know how it'll fit in with your mate's game.

Or yeah, a pdf would have been more helpful, wouldn't it? Sigh. Here you go.

Hi Zak, here is a Thiefling Ranger for the fabulous Connie - may she (and you and the rest of the group as well) have fun

I gotta say, that's a really awesome picture of Connie

That is an awesome picture of Connie. I'd quite like to use it as an illustration for something; at the very least, an NPC or blog post about same.

"An assassin with a greatsword doesn't make sense, but they do when you consider how 4e is played."

Should be the reading line of the 4.5 PHB. As why 4e is both silly & awesome.

Blogspot ate my comment yesterday, which was something along the lines of "that is a great picture," & also "I should take a shower myself." Priceless insights were lost.

I got nothing, especially since I haven't even seen 4E, but I had to say that photo is stunning!