The original version of the Magnesium Spirit is one of a whole dull batch of unillustrated (or under-illustrated) things-that-have-one-exotic-attack-and-then-try-to-possess-your-body monsters in there.

My version here (sorry the bottom bit's blurry 'cause of the scanner fucking up) is a sort of alchemical semiundead. It looks like a sort of awkward, wavery version of a person at first. However, then the upper half of its body explodes in a burst of blinding light (save vs whatever or be blinded) and this flash then throws shadows on the walls or other surfaces nearby.

If the flash of light should happen to hit any living thing, its shadow will turn into a shadow with abilities and hit dice commensurate to the size of the cast shadow itself (in most cases this will be limited by the size of the room.) Outside in mist, the creature's flash will create Brocken spectres--which behave as wraiths. 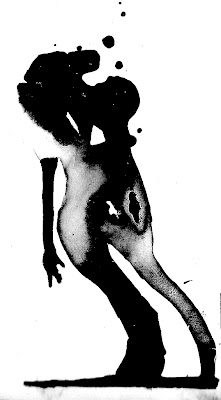 As these shadows attack, the Spirit itself will attempt to gnaw at the target(s) in order to consume the magnesium in their bones. Its physical attack is relatively feeble--however, after 4 rounds it will regenerate its upper body and be able to generate another flash.

It would seem then that anyone who can see the creature when it 'flashes' would have at least a small shadow created.

Would the flash blind opponents? Add a negative modifier to their combat ability? Need a saving throw to avoid?

uh, did you read it?

I must have failed my save.

Very nice! I believe I'll stat this up and add it to my wandering monster tables. Thanks!

That is pretty fucking cool!

For the Antimatter Spirit, the same thing, only instead of Shadows & Brocken, it is an evil twin of the PC. What are those things called...Atix? Elix? Whatever. Them.

I am actually fond of the original, but this is just dandy! (Bringing Brocken Spectres into the mix certainly helps.)

The idea of a monster whose main form of attack is, every X rounds, summoning a bunch of other monsters just doesn't sit right with me. But that illustration is lovely. It's really creeping me out.

Neat idea - the shadow creating flash definitely is evocative. But there's one thing I'm not sure how about... how does it 'gnaw at the target(s)' if it's upper body hasn't yet regenerated during this phase.

I'm new to your blog; I just found it a few weeks ago. But it's fast become one of my favorite stops. Your Fiend Folio fixes are fucking awesome. Are there any chances you might collect these when they're finished? Would copyright considerations prevent that?

no particular plans for this series, but if they did get published it'd be easy enough to change the names---and the attributes and pictures are already different