Thou Shalt Not Steal 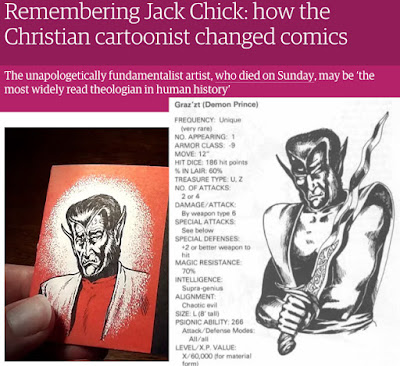 I will not hold it against him for making fan-art of Graz'zt. I did do it too... twice! B)

If you made Rob Liefeld really religious and angry and judgmental but just as much of a shitstain, you'd get a good approximation of Jack Chick.

I'm just sorry that no news organizations had the balls to print a "Jack Chick Dead, Finally" headline.

He's dead. He was a cultural force for IMHO evil, but the man's gone. Mock his work but let's lay off the man.

No way. He was about as bad as a man could be, short of violence,. If anyone deserves a "good riddance" it's him

I'll take the same line as a commenter on my blog; you should speak the same of the dead as you would have done when they were alive.

He was an overwhelmingly vile bigot who deserved only condemnation and a kick in the junk. His portrayals of Catholics and blacks were despicable enough, but fucking Goebbels would have called his depictions of Jews over the top and lacking subtlety. I'd not only have happily said so while he was alive (and did), I'd have said it directly to his face while distributing the needed kick. In a just universe, the only respite he'll receive from burning in hell is for Hitler to piss on him.

When Margaret Thatcher died there were celebrations. While she was with dementia it would not have been fair to berate the evil shit for she wouldn't have remembered what she had done at the end. There was no way everyone was going to let the state praise her in absentia without there being the counter response to her evil. In her case it was good riddance to bad rubbish.