Bake The Squares And Scatter The Candy 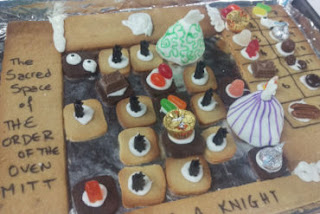 So I was a judge on the awards jury at the Indiecade festival this year, which was neat. Although I've had stuff there in the past, and they do technically recognize all kinds of games, it's mostly a video game thing, so there weren't any tabletop RPG things nominated for an award this year.

There were, however, some games nominated that were RPG-relevant: I wanna talk about Jenn Sandercock's Order of the Oven Mitt.

The main gimmick is it's an edible boardgame. So far so good--I have always wanted to make an edible dungeon where you get to eat any giant gummi worms you kill--but it stacks more layers on from there.

At the bottom, there's a chess variant--4 players play knights, starting in the corners of a 5x5 board with occupying "NPC" pieces in each square. They're on teams of 2 players each. Each time you take a square, you get to slide the entire horizontal row or vertical column all the way right, left, up, or down to fill the space you created. This includes sliding anybody else's knight who happens to be hanging out on the same register. This in itself is already pretty cool as chess variants go--you're changing the board each turn.

On top of that--the host (probably the same parent who baked the board and pieces for the 10-year old chess club kids this game is optimized for) has scattered a series of special squares, each containing a different kind of candy.

On top of that, each time you take a piece with candy you of course get to eat it however each kind of candy has a specific ritual attached to it. So, like, with the gummi bear you have to eat the head first and with another one you have to jump three times, and one you have to like apologize to the candy or something and another you have to reveal something embarrassing, etc. Your teammate gets to eat a clone candy of the same type and also performs the ritual.
-
-
-
So that's the game. One thing I love about it is that it immediately gets your mind going toward variants. Can we do it with square-cut pizza? Can the rituals feed back into the board set-up? Can...

Now one thing that puzzled us a little at first was the win conditions: the rules say that it ends when all the candy is gone and nobody wins and you should cooperate. But then why are there teams? And what's my motive for thinking about how to shift the board if i can't win? Why not shift it arbitrarily?

But then, oh, duh, right--the reward is the candy.  Specifically two things about it: there's only one square per kind of candy and if you score one then your teammate gets to eat that same candy. (This may have taken us a minute to figure out because the build we were shipped to judge had--through no fault of Jenn's--really stale gingerbread squares, so eating the candy was kind of excruciating but the candy at the actual fest was way better.)

So the idea is: Kandy Korn kid's team tries to manipulate the board so she gets Kandy Korn, marshmallow kid's team tries to manipulate it so he gets a marshmallow, then they both struggle over the right to eat the Junior Mint etc. So there's no winning but there are rewards and goals, and the rewards and goals are scattered across the board by a game master at the beginning and sometimes these are shared and sometimes not, and some of them (licorice) don't even register as goals to anyone but are still there and the rituals of seeing other players get the candy they want are funny even if you're not eating it and the attempts of different people to get what they want changes the world beneath each player.

Which is kind of exactly how sandbox D&D should work.
-
-
-
And now, a word from our sponsor:

Word to the wise. If you're gonna do edible bad guys make sure they're wrapped or by the time your dozen gummy guardsmen get done traipsing all over the hexmap they're gross as fuck and everyone's miniature is sticky... and not in a good way.