Sailing on the Sea of Night 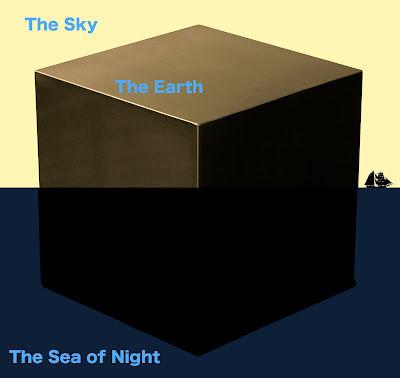 Though its atmosphere is round, the Earth is a cube.

It floats half-submerged, in the Sea of Night and spins slowly--one rotation every 24 hours.

It is said that if you can reach an edge of the cube at dusk with a ship, you can slide off the cube and onto the Sea of Night, at which point you can sail (beneath an ever-present but increasingly distant sun) out to distant positions (discoverable by certain charts, said to be deep in the vaults of Gaxen Kane, whose founders stole the sickle moon to use as a boat) where one can dive for stars--or else continue to sail to the great and palisaded islands where dwell the gods of all present things.

The elder gods (such as the great and tentacled She Who Sleeps And Her Dream Is The Sea) came to us via a process nearly opposite. Since (as anyone in a dungeon might tell you) all things seek the center of the cube via the process called gravity, they swam from the stars, up through the Sea of Night, into the oceans of the cube where they were bound by the magic of the First Reptile Empire.

It is not known how the stars maintain positions so distant from the Cube, at least not by humans. Anaximenes claims they are distant discs, hewn from gold.

Yay! I'm one of the assholes!

wondering the angle of the cube as it spins. Does the axis run corner to corner, so each side has the same sort of day?

Did you know you can create short links with AdFly and receive cash for every click on your shortened links.