So modrons are the little geometric monsters from the Plane of Order Gary Gygax dreamed up while he was drunk staring at dice, and which I think first appeared in the AD&D Monster Manual 2.
Tony DiTerlizzi and Monte Cook later steampunked them out (before steampunk was even a thing) for Planescape and made them playable characters, but the core of their deal remained: they were creatures of ultimate order, hierarchical, and lawful. 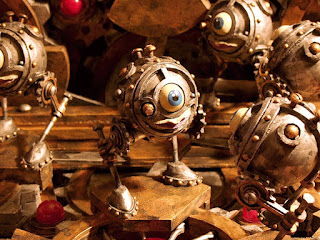 So, I was thinking about how this could be turned into something that actually affects how you use them in play, rather than just being like another jerk that hits you for d8+2 only this time the DM does a robot voice. And I figure: Modrons know the rules. They have System Mastery.

Like Plato or those guys who used to write in to Dragon that castles wouldn't exist in a world with the AD&D spell list: they believe all that currently is is the one and only possible consequence of the principles by which the world operates. And they believe they know those principles. Like if you know the principles of the universe you should know how many feathers a chicken has--the world's not that complicated and Heisenbergian uncertainty doesn't exist.

Their only problem is they only know the system. Anything that would require a DM call they just can't do. If you jump on top of one of their heads and they have to try to hit you with one of their dumb spears without hitting themselves they're just like fuck doesn't compute. If they're running down a hill from an erupting volcano on their clanky legs and you're like "Dude just roll it's a volcano and you're a sphere" they'll be like "Cannot! Maximum move speed is 10 feet per second". Until WOTC publishes it, they can't do it--if you thumb wrestle them, they'll always lose--and, in a deep irony, they can't play chess.*

Also some of them look like the bad geometry angel from Evangelion.

___
*Wait I guess they could play if you literally walked through each second of the game but they couldn't abstract a game of chess to some kind of int/perception roll or whatever and do it because that'd be a GM call.

Primus commands! Back to the energy pool!

There is another monster who first appeared in (a comment to) a platonic dialogue: Demogorgon. Just sain.