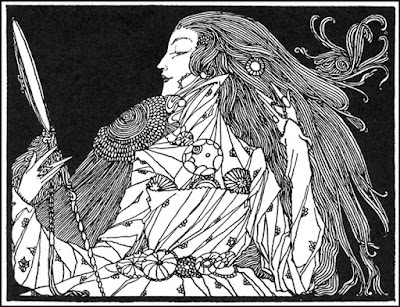 Like Thales, the first philosopher, Elves believe that everything has a soul. Obviously because that's how you do magic: be like "Hey fire, do this" in fire language for example. Elves see wood sprites at family reunions. They think trees have a soul and snow leopards have a soul and a harp has a soul. And a brain, too.

This does not in any way mean they won't chop a tree's innards out and disembowel a leopard and make a harp out of their respective guts and pluck on it all day, on a couch which also has a soul--and ideas and hopes and dreams. If it did, they just be faeries. True fey fucking respect the sentience of all things and that there is no hierarchy among them. Elves are half-fallen already, toward humanness. They like complicated artificial music made of vibrating string and they're not going to let the fact a tree likes spreading and growing toward the sky get in the way of it.

Metaphysical faith--like all ideas requiring morality and power to work in concert--implies both profound contradiction and a willingness to ignore it. Your average elf will totally stick his or her foot in a shoe while totally believing the shoe has thoughts and desires the same way most of us have decided we simply couldn't function if we continuously contemplated the totality of the plight of the chicken we eat or the homeless human we walk past on our way to get it.

The usual fantasy trope is that the evil elves are a distortion--that elfness is natural and noble, and that some drop of venom must have found its way into the formula to create the cruel ones. But in actuality the elf is already poisoned: it isn't faerie. The elf is organized, technologized, militarized, civilized, and it draws psychological comfort from imaginary lines between its consciousness and that of things that don't move on their own.

If, given this will to invent and cultivate and build, anything about elves can still be called natural the most natural tendency is the slaveholder's hauteur of the classically evil elf: they've decided their kind is so magnificent it deserves to enslave horses, swords, socks, bread, tables, castles and wine (or at least accepted themselves as so weak they couldn't possibly stop themselves) why not enslave dwarves, humans, halfings, too? The deeply chauvinist code of the traditional Gygaxian Drow is the most logical consequence of the basic elvish assumptions: Everything has a soul, some souls are more important than others. At least if you're us, which we are. If you're already using a fork, you might as well use a halfling skull as a bowl--anything less is fooling yourself.

Although there may well be more good than wicked elves, the truth is this goodness has no consistent philosophical underpinning. If they're perfectly honest with themselves, good elves respect the rights of dwarves and people because they have more in common with them than they do with candles and crossbows--and because these creatures fight back harder when you try to press them into service. And, even then, the elves see in the shorter-lived species' unwillingness to grasp that even the kettles they callously broil each night have rich inner lives as a provincial and self-serving creed that nevertheless manages to feel like a bumpkin satire of their own convenient and inconsistent morality.

This is why good elves always seem so anxious around other humanoids--why Elrond and Legolas and Galadriel and the rest always come across as if they're speaking to a good friend's poorly-behaved children. "I want to correct you but who the fuck am I?" Their reticence is not the reticence of the wise to interfere with another's path, it's the reticence of the sinner to judge sin. The role of moral force does not come easily to one who knows every cup of moon-ripened wine is an extinction yet equally knows she will never not drink.
-
-
-

If anything, this type of philosophizing is what the OSR is good for. Deepens and enriches gameplay, makes publications from products into works of art. If you've got these kind of thoughts in the back of your head when either playing an elf or running NPC elves, it can't help but lead to a more nuanced and entertaining portrayal. Similarly, neither TSR nor WotC could ever have thought of publishing something like Death Frost Doom or Vornheim. The 2E drew supplement I recall had Drow as cartoonish, serial-style villains, evil for evil's sake. Evil justified by logic is always much worse - look at the world around us.

This is also a way to escape from the 'all Elves are Legolas' Tolkien-trap mindset. I always thought those 'Ecology of the monster' articles from Dragon were terrible because they 1) shoehorned fantastic creatures into biological categories and 2) they normalized thinking about beings with viewpoints and experiences that are unthinkable in human experience. Kind of defeats the purpose...

Posts like this one are why I read your blog. Nice work.

This and the Patrick's post about drows are more deep more than all books about elven culture in the mainstream dnd.

It's funny that you recently posted this as I've been searching for a way to explain in clear terms the personality of a new character I'm playing in an upcoming campaign; a Fey Touched Moon Elf Warlock, who's patron is The Queen of Air & Darkness. This type of Hylozoism; aloof, cold, and yet agreeable POV, is the perfect description for how I wanted to portray my elf.
Great article Zak!

This one I think: