Notes On the Vice D&D Article

So Vice asked me to write a thing about D&D--it went up today and it's here. 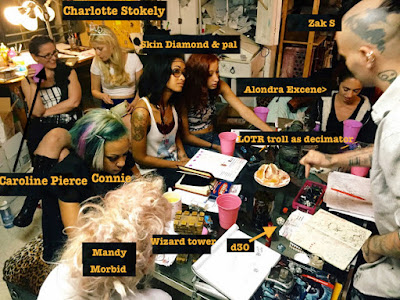 This picture's from this session.

Last e-mail exchange before the article went up:

Unless you relish kicking off a "fake geek girls" panic in the comments, it's probably good to note (in their credits or in my bio) that these photos are from my actual weekly game group. 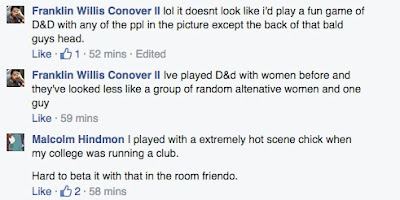 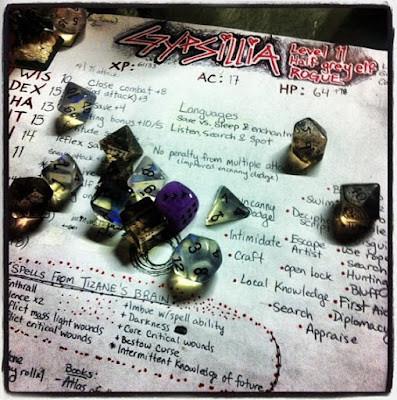 They're actually worse than the comments on the Maxim article, which were mostly just amused. Also there are some awesome girls fucking shit up in the Facebook comments now, so that's fun.


The Richard Lindgard quote is often misattributed to Plato.

The Ice T quote is from just after he finished doing a passage for a Driz'zt audiobook.

The character sheet and sketch are both from Connie's pig-head-helmet-wearing half-elf thief, Gypsillia.

The "spells from Tizane's brain" listed inside the ring of dots are from when she drank a potion allowing her to learn spells by eating a spellcaster brain and then ate a temporal duplicate of Mandy's character's future self.

"a three-headed god that carries a panther-skin bag and throws a magic brick for 5-50 points of damage"--No Cha from Deities and Demigods. 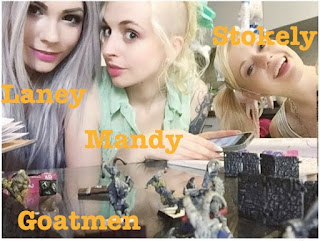 "Marilyn Manson says he was a dark elf" --as related at Laney's wedding.

The fucked up gray factory thing was some scenery I built originally for 40k, the green guy is a Reaper ice devil, the minotaur's also a Reaper, the goblin is a Reaper deep gnome.

You can read some prime Clark Ashton Smith here.

A fine example of Jack Vance's prose is here.

My favorite Lieber is The Snow Women, for example:

This outwardly comic combat had sinister undertones. Particularly when working all together, the Snow Women were reputed to wield mighty magics, particularly through the element of cold and its consequences: slipperiness, the sudden freezing of flesh, the gluing of skin to metal, the frangibility of objects, the menacing mass of snow-laden trees and branches, and the vastly greater mass of avalanches. And there was no man wholly unafraid of the hypnotic power in their ice-blue eyes. 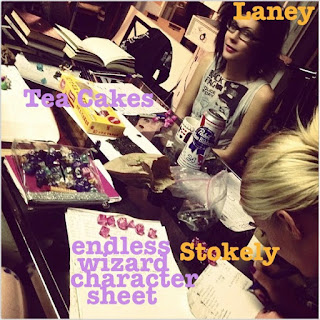 I was surprised to be asked to write an article about D&D for Vice, but the distinguishing characteristic of the world is that it is reliably both large and strange. 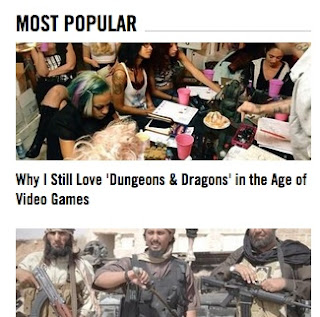 *sigh* I guess some people are so utterly convinced of their superiority that, when you provide examples of how your own life is different (by "different" I mean "better"), their only option is to not believe it & attempt to stop others from believing it as well. It's sad, but not unexpected. When I play D&D, everyone is welcome at my table. Unless they're assholes. Assholes aren't allowed at my table.

Ha, they just don't get it.

"No battle grid? how do you factor in flanking and positioning?"
Puhleease. Do they know D&D is a role-playing game and not a board game?

First comment is the funniest. How is a bunch of people sitting around a table filled with dice, books and character sheets completely the opposite of what a dnd session TRULY looks like?

I should be old enough to no longer be constantly disappointed in the segment of humanity that posts online, but somehow I still am.

Get a middle aged bald fat guy in your group now or it isn't a real group. Every group EVAH has one in it. If you read the fine print on Zak's DM license it even says it. We think it's because middle aged, balding, fat guys made the game and wanted to always be able to get groups.

Nice article. Unfortunately unsurprising shite reaction from people for whom hating on something seems a valid use of their rather precious time. Also, exactly who is drinking my scotch? Eh, never mind. I'll grab another.

And yes, kids, you can play without a grid. I never used one until college, though I always thought it'd be useful for ranged weapons. Can't say I cared for it, but I think that had more to do with that group's style

Heh look! I never knew it was possible. I never thought it could be true. Never in my wildest imaginings could I imagine you could get Tunnock's Tea Cakes outside Scotland :-D

I don't understand the situation you and your players find yourselves in at all. On one hand, you are shit talked to/about by the type of idiots in the above article, and on the other you are attacked by a brigade of hyper sensitive SJWs for Damn near the same thing. The revelation of this horseshoe theory as an actual thing is mind boggling. Holy crap.

Keep doing what you do, I preach your blog and products to everyone I can. I think you are one of the most creative gamers we see in the industry.

Really funny. My first thought was more along the lines of "Huh, Zak S.'s gaming table looks just as messy as mine..." ;)

I'm amazed everyday on how much the internet people is angry about everything; Is like they hate fun or something.

I'm amazed everyday on how much the internet people is angry about everything; Is like they hate fun or something.

You guys always seem to be having so much fun round the table. That's what so many idiots miss, we're all in this for the pleasure of the game and the friendships made out of rolling dice and killing orcs.

To soddery with the goons, you keep on being hoopy.

I had a mighty giggle at the battle grid comment

"Playing Dungeons & Dragons after going through the polished and shoulder-padded world of the more normcore gateway drugs—Warcraft, Skyrim, Diablo, Baldur's Gate, whatever blockbuster thing with hit points and constitution scores that's keeping you from going outside—is like cracking open Revelation after a year of Sunday School."

If there is a place in the world where a hand-made character sheet is a minus, that is a place I don't want to be.

Seriously though, it is a very good article. In an alienated age, tabletop gaming retains a strong element of hospitality. When else do most people invite others for an afternoon or evening? It is an increasingly rare thing, and something most of us should probably do more often.

Zak, I commented over at Vice, but I'm still scratching my head about what you mean by "meaningful" in this sentence: "Unlike today's digitized RPGs, D&D was not designed to be accessible or even (to the chagrin of child psychologists) meaningful because, basically, it wasn't designed." As in, valuable, or informative, or having concrete, lasting or intended consequences for its players, or maybe purposeful?

"Purposeful" in the didactic sense.

ie it does not purposefully or successfully teach a specific lesson on its own.

Gygax, Arneson, Jacquays and other early architects would not have agreed on a lesson to teach players and even if they could the game (like life) is so complex & open to interpretation such a purpose would be subverted.

Different people take away different things. I am sure as a GM you cna use it to teach a lesson, but on its own, it goes in many conflicting directions and that's a strength (like all great art).

Dude, the potion of learning spells from a brain and then eating the brain of the future self incarnation of another PC is just fucking berserk. Your games are so fantastically weird. I'm waiting my copy of RPL, which will be weird I am sure, but can you also write more stuff in this space about like... weird gaming things. My games are not weird because I suck and I need to read stuff about weird gaming stuff.

People can't seem to get over their policing of "badwrongfun". Their lives must be rather lonely. On a different note,,,"babyhead"? WTF internet, put some effort into it.

I don't care what anyone says. Your games look like the BEST D&D sessions ever. Still loving your books.

Those comments haha. I played with them and they really play lol. Not just for a photoshoot on "nerd girls." Intimidating group to play with for your first time. They're all so good!

I hear that. "Seriously, you can just print them off the internet." Why paint something yourself when you can just buy a Thomas Kinkade painting in a store?