The Art Economy In Vornheim

For a moment a terrible hunger lit up her eyes. But it turned slowly into indifference. "Besides," she said, "I would not go if they did. Why should I go? The High City is an elaborate catafalque. Art is dead up there, and Paulinus Rack is burying it. Nothing is safe from him-or from those old women who finance him-painting, theatre, poetry, music. I no longer wish to go there." Her voice rose. "I no longer wish them to buy my work. I belong here.

Sooner or later, the party will be paid in contemporary art--a small canvas by Aelfron Aelrey or a book of poetry by Princert with illustrations by Scraptric in with the ill-fitting ringmail and headless coins.

The good news is: By weight, art is worth more than almost anything else--hundreds of thousands of gp-and-therefore-xp. The bad news is: Its value depends on the whims of the salon critics of the High City.

The solution that presents itself most immediately to the conscientious FLAILSNAILER or murderhobo--assassinate the opposed critics--is impractical. This only creates martyrs of the physical bodies, leaving their philosophy intact to be carried on by those they were already influencing anyway. The party's goal is to discredit the hostile critics philosophically in such a way as to increase the value of the artworks they opposed, thus rendering the adventurers wealthy.

This is less dull than it sounds. 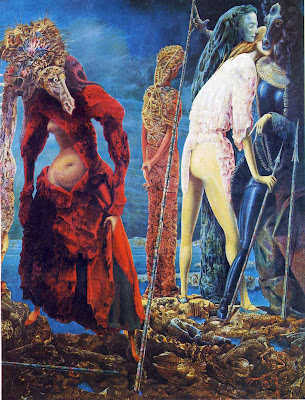 In the Vornheim salons, the current rage (in every sense), is Arbitrism, which is difficult to summarize, but let's try:

Since at least the Hex King's War it's been immediately clear to anyone that Vornheim's cosmopolitanism is imperfect--those of the Southern Continent are scarce, those of the Eastern are unheard of since the time of Ping Feng, women are wary of the Laws of the Needle in the low districts, dwarves will not mine any stone in mixed company, half-elves fear for their lives in the Prussing Fields--the city is in many ways an ignorant place. The people do, after all, worship pigs.

Arbitrist critics blame all this--and the decadence that results--on the city's many poets and painters--focusing particular bile, among contemporary artists, on the writer Flameward Ragged Dei, a human living among elves in Nornrik, and the creatives associated with his small publishing house and its philosophies--Insane Etiolation Process, which, for practical purposes, is nearly all of the good ones.

The Arbitrists survive through intellectual arbitrage--that is, taking ideas that were discarded as useless in their native fields--philosophy, natural science, the academy--and importing them to the world of art, where their exoticism grants them a dazzling currency among the status-anxious neurotics of the collecting class. 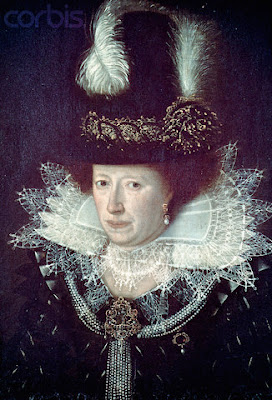 Once an artwork is acquired, the more hostile critics are discredited, the more the work will be worth once sold. A poem by McCoffering Ginny is worth ten times as much in a world where the "red wizards" of The Awful are exposed as frauds.

The methods employable to discredit an Arbittrist depend somewhat on the critic in question, but it is safe to assume they are all discreditable since the philosophy itself is inaccurate. No sane, intelligent person could honestly hold it, therefore the critic must be insane, unintelligent or dishonest. 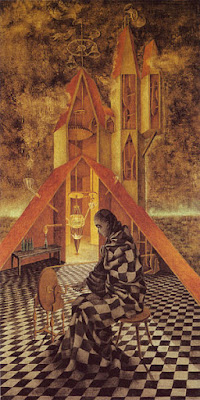 Typical vulnerabilities of bad critics include most or all of the following:

1. They possess a documented and widely-attested official history of madness, and their doctors will argue that their critical views are a result of this madness.

2. They are charmless and slow-witted--any personal contact with members of the salons of Vornheim will immediately convince interlocutors of their inanity.

3. Creative-critical dissonance: they have created hidden works slathered thickly with the values they despise.

4. Personally terrible--they have committed grave and secret misdeeds in dark corners, from which their stentorian proclamations are a GOP-ish distraction.

In the case of 1, 3 and 4, documents or NPCs attesting to this can be treated as a kind of treasure to be sought across the hexmap or dungeon, or buried in a drawer at the end of an investigative scenario. In the case of 2, the goal is likely to convince the critic to appear in the salons of their own accord via social maneuver.

Further, all proponents of Arbitrism are, consciously or not, agents of the Red Hand of Tiamat--preparing the world for the coming of the lava babies. They are not without defenses, and the party may find themselves set upon by assassins and slanderers. 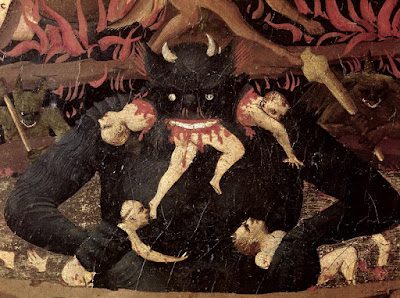 The physical location of critics is rarely considered to have any import in the salons--some occupy the city, some live East of Yoon Suin--they propagate their ideas via proxies. Hurling Tracing earned her name by periodically dropping copied artworks from a window of a tower in the Mulched Fen.

They go about in high dudgeon, and finding one is generally no more complex than tracing the rail of snickers and eyerolls back to the source. To find out the critic's current obsession, consult the table:

1. Famed director Orgel Ooclas has created a fantasy for the theatre concerning wizards and steel golems that dwell beyond the stars. In a revised version, one character, a beloved rogue, loses initiative in a tavern brawl when previously he'd won, causing a wide outcry of "Slann drew first" among the theatre mobs. The Arbittrist cites this popular reaction as an example of "poisonous manhood" and the work itself as "imperialist propaganda"--though admits to never having seen it.

2. The Arbittrist has become enraged by the word 'madness'--claiming it is has the effect of devaluing the opinions of the lunatic so labelled.

4. Serialized poems concerning the adventures of a scion of a high family of Vornheim who adopts the affect of a bat and protects the weak from violence and predation have gained favor with the young and young-hearted of the city. The Arbitrist is opposed. As a member of even a fictive upper class, imaginative sympathy for this Bat Man is unimaginable.

5. Parents of the city have begun constructing "sand boxes" wherein children might build from that humble substrate towers and homes for dolls and imaginary friends. It has come to the attention of the Arbitrist that it is a frequent practice to dismantle these miniature residences and sometimes even abuse the toys who dwell therein. The Arbitrist is alarmed that those who enjoy these "sand boxes" do not use them to simulate creation rather than destruction.

6.  The practice of counting "Hitting points" in schools of duelling is reviled by the Arbitrist--who claims it saps the creative expression of duellists.

7. Conservatory students, aged 8-11, have lately performed--to wide acclaim--the brooding and experimental ballad "Forty Six and Two" originally composed by Memes Canard Keyplan's Implement Quartet. The Arbittrist has railed against it on the grounds that the young girl singing the lead part does not grasp the true and esoteric meaning of the piece.

8. The Arbittrist is enraged by the hair style affected by an artist of the Warm Quarter.

9.  The word "barbarian" has been declared upsetting, as its etymology refers to the brutalities of the past.

10. Playwright Lost Weevil has created "The Scavengers"--a work wherein a god of mischief contends with an archer, a spy, a patriot, a knight in gold armor, and a gamma troll--receipts have been unprecedented. It is the Arbittrist's opinion that Weevil's entertainments serially insult the women of Vornheim, this one most of all.

11. It is an established fact that humans and demihumans often have bad ideas. It is the Arbitrist's notion that all humans unconsciously adopt all of these bad ideas and that, therefore, they are all loathsome, including themselves.

12. A group of sculptures purporting to depict creatures of the Lower Planes has been produced--the bodies are distorted and erotically charged. The Arbitrist claims their shapes insult the women of Vornheim.

13. Another Arbittrist has called for the censorship of the work of starry-eyed author and fantasist Geil Mainann. Mainnan, in turn, has responded by saying he shouldn't. The Arbittrist cites Mainnan's behavior as a clear case of harassment.

15. The popular art works have inspired young women of the city to wear outrageous and revealing fashions in imitation of their heroines. The Arbitrist feels this insults the children of Vornheim.

16.  The Arbitrist has written a play. The Arbitrist is now disgusted by it--claiming the many hours spent writing have rendered it familiar and contemptible--and wants no part of the production.

17. The toymaker Rike Pearls--has hired an anti-Arbitrist artist and critic as consultant at the toy factory. The Arbitrist is incensed.

18. It has been widely reported that adventurers inside the city and out have taken to slaying dangerous and predatory beasts rather than ignoring them or allowing the parties themselves to be slain. The Arbitrist finds this practice "othering".

19. Teratophilic pornography from the East has lately appeared in the bedrooms and evidence-vaults of the city. The Arbtrist has declared it and its inculcators anathema.

20. An illustrated guide to Gyorsla and Voivodja has been recognized with some minor awards. The Arbitrist is displeased.
-
-
-

The number of these that I not only recognise but can describe in detail makes me think that I should go outside and do something wholesome, like take the dog for a walk or jump off a bridge.

All in all, I think you've achieved a very authentic depiction of insanity.

Disclaimer: There may or may not be some Satire in this Blogpost.

"Don't get 'Kids Performing Tool'. They get these song as much as white metal bands get NWA songs or Iggy Azalea gets Iggy Azalea songs."

Thank you. Very talented kids there.

You are obviously more experienced concerning the art business today, but I like to think its not totally arbitrary as it is in Vornheim but at least a little bit of quality is relevant, as in things are regarded as good, partially because they are well made. In Vornheim however the quality of the goods doesnt matter at all. In a way the Vornheim Artworld is the exaggerate example of how this "art thing" is done today.

But this is probably just a matter of semantics so ya....

it is totally arbitrary