There's that RPG-a-day thing going around. Figured I'd do them all at once.

1. Forthcoming game you're most looking forward to:

Break!! Also I am looking forward to seeing Jeff Rients' Broodmother Sky Fortress come out. I think it'll change how people look at introductory modules. Or it should.

2. Kickstarter game you're most pleased you backed

This is impossible but interesting. Let's list some surprising games:

-Monsterhearts surprises me that it's so popular with the people it is popular with in sort of a Poe's-Law-wow-satire-is-impossible way. Though I do know some very nice people who like it, too.

-Torchbearer surprises me that it exists at all. I can see Burning Wheel as kind of the postForge's version of a RIFTS-era heartbreaker design (Why not add this to D&D? And this??? AND THIS????) but a game that actually straight up tells you it'll take maybe 10 sessions to even wrap your head around the mechanics and that challenge-via-mechanical-mastery is kinda the point plus all it does is simulate low-level dungeoncrawls seems like a smoke signal to a tiny community on the moon I never knew existed.

-5e D&D surprised me by being good.

-Palladium games surprised me when I look back on them now to see how obviously clumsily designed they were. Which I suppose everyone and their dogwalker's mom's landscaper's housekeeper knows, but it's worth pointing out it was surprising, when I first entered the blogosphere, to have it pointed out since those games were so goddamn fun for us as teenagers. Which fact, I suppose, in turn might surprise designwanks retroactively.

-Cthulhu continually surprises me with how easy it is. People just get it. It also surprises me because you can use it to run anything, including Night's Black Agents or Chill, and it's better if you do.

-Marvel Superheroes--FASERIP--surprises me with the fact it's still unsurpassed in the genre yet also not officially updated.

-I was surprised to see I didn't like DCC quite as much as D&D. The one or two extra steps seem to slow combat down jusssssssst enough that you get less done in a session. I still like it, but getting the DCC magic to fit into a game that moves at a speed I like is an unsolved problem.

Yoon-Suin. Which was a good idea.

Call of Cthulhu as player. As DM: D&D, natch.

8. Favorite appearance of RPGs in the media

I am going to say "…other than ones I was involved in".  I liked the D&D references in the Renaissance Fest episode of Home Movies. Home Movies was awesome. Nothing is better than Home Movies.

9. Favorite media you wish was an RPG

I think a good RIFTs-style/anime or anime-able game is still yet to be accomplished.

I am not gonna pick between my DIY D&D pals--but they're my favorites.

That Adrian Smith drawing I couldn't shut up about is probably a fierce contender, but that also feels like a Sophie's Choice, so fuck it.

I don't really listen to them. I will eventually. I promise.

Oh the epic all-day player-vs-player 3 rogues-vs-3-fighters session Scrap Princess ran where we invented a code language and cloned ourselves and turned people into houses and hid and stabbed and threw acid and still lost.

Dungeons and Dragons. Though, y'know, if I was playing Warhammer right now I might say Warhammer.

Reaching into the box of miniatures to summon a monster.

Whenever they invented random tables

26. Favorite inspiration for your game

The players fucked up ideas, honestly

27. Favorite idea for merging two games into one.

28. Favorite game you no longer play

There's enough pointless fighting around here without me going and pissing everyone off picking favorites.

Ditto. I like the pots and pans in my house right where they are, thank you very much

31. Favorite non-RPG thing to come out of RPGing

We're supposed to say friends. Which is ok because it happens to be true. I've met a lot of genuinely (like: world class, genuinely) great artists and writers in the RPG scene and some people I just like a lot.

1. Worst game you ever played

3. Game you never played but you knew it sucked just looking at it

4. Game you most wish didn't suck

5. Game about which you have the most mixed feelings

6. Old game most in need of an upgrade

7. Game you can run with the least prep

8. Game with awful art (and who you wish you could hire to fix that) 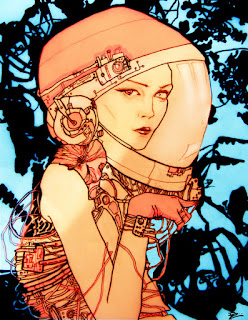 9. Best houserule you've seen in action and now use in your own games.﻿

10. Game you've most changed your thoughts/feelings about﻿

D&D. I used to assume that one of the decades worth of variants on D&D would turn out to be better. They aren't.

11.  Game you'd use to run just about any setting if you had to

12. Game that haunts you and you're not sure why

13. Game that would probably be most fun to play a bee in

15. Game that's good in theory but you're kind of on the fence about it to be honest

Out of curiosity, how do you feel about Savage Worlds picking up the RIFTS license? Do you think that will give it the sort of update you're looking for or would you rather it be something Palladium did themselves?

I don't know much about Savage Worlds but I've never heard anything bad, really, so it could be a pip.

DC Heroes: Did you ever see Blood of Heroes, it was a very interesting take on the system.
Laso yeah FASRIP is still the best SHRPG with V&V a close second and now I want to look at COC again--you rock Zack

That Danni Zamudio spacelady art is awesome. It's like the baby when Barbarella got drunk and slept with some guy from 40K. I ran Traveller recently and I gotta admit that it doesn't really have much in the way of standout art in any edition.

I assume by Dread you mean the Jenga-based horror game, which is very Marmite-y. I've ran Dread a few times now, and it can be an odd game for some people to get their heads around. When it works, I find it really works - like, I wouldn't use another horror game for the most part because Dread has been far and away the best for me at getting the tension of a horror film. However, I did have a player who have thought Dread "didn't work" and tried to write a "fix" for its core mechanic , which I can only describe as trying to fix a dog my making it meow.

I wrote a little about Dread on my blog, in the off chance it helps you decide whether to give it a punt or not. I'd be curious to hear if there's a particular thing you think doesn't work.

i have,of course, already played it

Let me try a different tack, then - what about it leaves you still unsure about the practice thereof?

when a game is that open, my players tend to be less invested and drift off into wackiness in a way they don't in call of cthulhu

Can you elaborate? I've played two games of TBZ, the first one was brilliant (great dynamics for a one-shot game, character development and mechanics inspired the story really well), the second kinda sucked (re-learning rules after few months was far too time-taking). I wonder what's your take on it.

Mechanized character development always strikes me (and my players) as terrible.
Character and story development are so easy and organic that mechanics designed to encourage them are a bit like bringing coals to Newcastle

Hmm, not sure I can add anything useful, then, since my experience was pretty much the opposite - Dread and the every-pull-might-kill-us tension kept my group focused on play from the first pull to the last. In contrast, Call of Cthulhu in play has always feels a bit overly gamey/nerd cliche and thus disengaging to me.

I guess your players must prefer the hard numbers of a more traditional character sheet as clues for who their guys and girls are rather than trying to extrapolate from the questionnaire. I did have a player once who clearly wasn't in the right mindspace for Dread and their answers to their questionnaire were pretty bonkers.

No, it' s more that the "bonkers" answers produced characters and stories nobody was really invested in.
.
It was like: we're gonna die before the end of the session, let's just play it a little detached

I definitely agree that Fight! is just a bit too clunky for my liking. All of Burning Wheel suffers a bit from the fact that the players really have to have read the core rules thoroughly to play the damn thing, compared to the typical RPG style of "I'll turn up and the GM will explain as we go". The game is full of stuff which I just can't see as being practical unless you only run the game for other Burning Wheel GMs.

That said I ran Burning Sands, the Dune-a-like hack for Burning Wheel, once and I didn't mind the system there so much. Dune is a setting in which one-on-one duels are discussed in a fair amount of detail and it kinda felt right do the stab-by-stab approach.

In a more traditional fantasy game, though? Meh

Burning Wheel is the most traditional fantasy game imaginable.
It's about 10000% more traditional than D&D--it actually incentivizes keeping the fantasy traditional.

Yeah, like you said in your original post, it's not exactly a bad rules idea it's just in the wrong game.

I think I might prefer the social combat Duel of Wits version and I don't entirely know why.

Like I said, opposite reaction to mine, which must just be one of those "different groups play differently" thing.

I pretty much have that exact problem in CoC, since the assumption in some nerd quarters is:

and even when the narrative isn't going that way, the GM feels compelled to put in a body count. In those situations, I also think, "Eh, why bother caring, I'm just here to be a notch on the GM's screen"

This may say more about me having shit CoC GMs than anything else though.

When I see people who are walking stereotypes I run as far aways as I can as fast as I can.

The art is very-weird-If you liked DC then Blood is a more Violent version?
My copy was stolen or id send it to you. It's an interesting read but as far as the SHRPG genre goes its Villains and Vigilantes & Marvel are the top 2

Which version of CoC-there are a few?

Savage Worlds is amazing in that it should not work and it Does!

My PC survived "Masks of Nyarlathotep." I've ran "Horror on the Orient Express" and had two characters survive the brutal 14 weeks it took to run it.

6.5? I dunno. kinda recent but not most recent

CoC editions don't matter so much. There's a lot more polish now but the 3rd. ed. had some neat things and full-color art by Nick Smith. Sandy Petersen is back now for the 7th ed.

The Happy Jacks podcast people have an Actual Play podcast of a Star Wars game played using Mongoose Traveller. The GM has a bunch of mods for traveller, especially character creation rules, in their forum at
http://happyjacks.proboards.com/
but you have to register to see them. Registering is free and easy.

I love Marvel Superheroes, I have a semi regular campaign going and it's a blast. I'm trying real hard to like playing DCC as much as I like reading it.