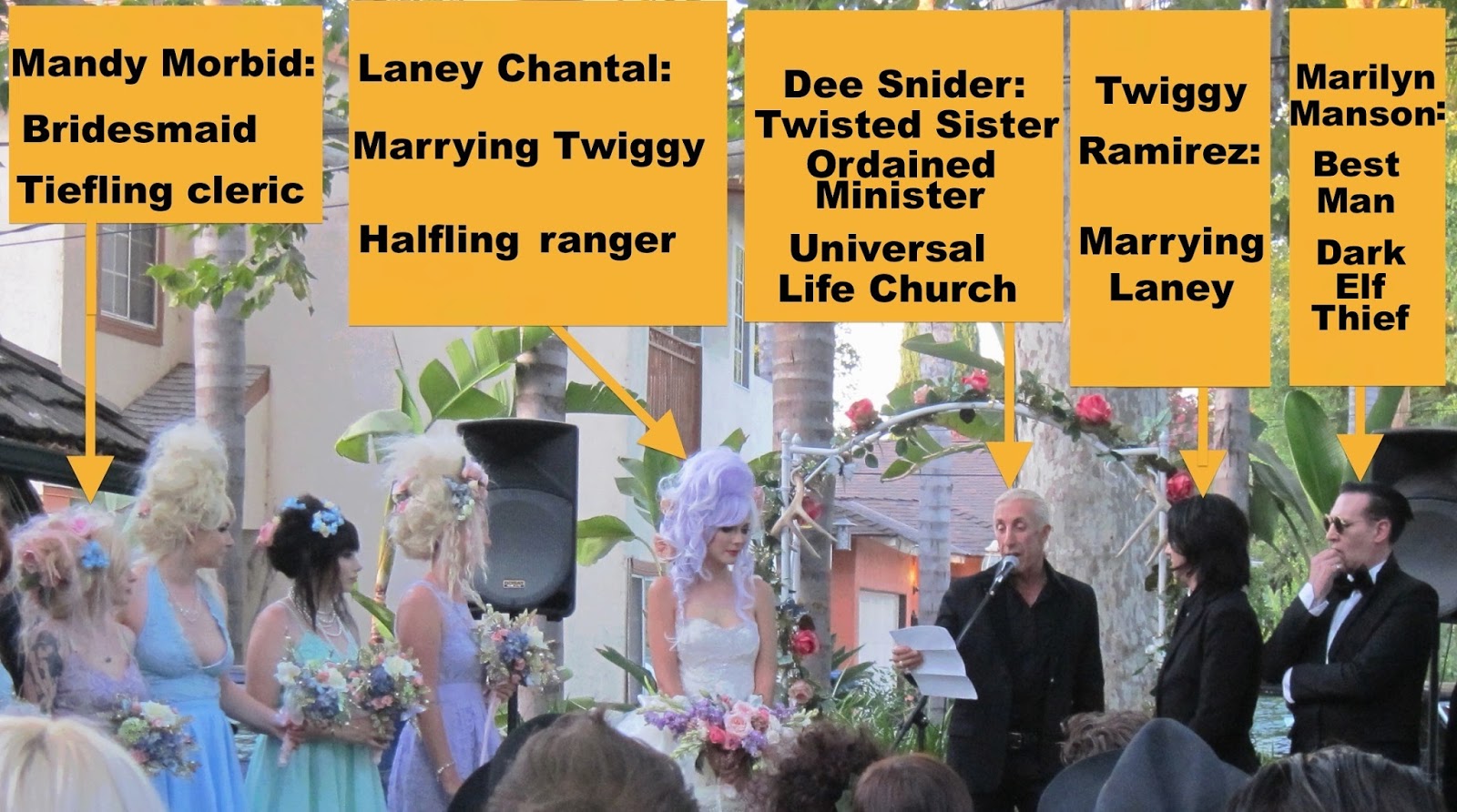 Our party's intrepid halfling moves from strength to strength--last week she saved everyone from a total party kill after narrowly escaping being fat and she spent this weekend marrying a rock star.

Your humble correspondent was given a great deal of whiskey by some ladies on the catering crew that he suspects were fans of his movies, got to tell Kerry King that Slayer changed his life, and discussed with the Best Manson a lot of things on a great number of topics that are best left unrepeated and a few things I can repeat about his relationship to Gygax and Arneson's baby, the World's First and Finest Role-Playing Game on this Day Before Gygax's birthday.

I could insert a long essay here about how music industry people all inevitably turn out to be weird involuted hobbyists about something very private and how talking to people at Laney and Twiggy's wedding reveals most of their friends are people who make things and collect things and how much of what was at the wedding like the birdcages and dresses and whatever was actually put together by the folks involved and then somehow loop that around to how Laney herself became a special-effects make-up person on account of Gwar and the late Oderus Ungus is such a D&D guy he wrote a module for Lamentations of the Flame Princess and how metal and D&D and special effects and performance are all kind of locked together in exactly the kind of way you'd expect despite frequent attempts to pretend otherwise because the best way to play D&D is after a long week of being out in the world drunk in the dark and really really really not playing D&D the same way it's nice to take a bath, alone, after 8 hours of soccer and then maybe talk about the double standard where everybody takes it as read that it's grown-ups-run-amuck-conservative lunacy for parents to try to police what's in a Slayer or Manson video but some third party D&D product it's like Watch Out OMG Problematic if there's a boob but either I'll save that for another day or I just wrote it.

Anyway, here's Manson on the game:

Zak: Laney comes over to our house and plays D&D.

Manson: Is it advanced D&D?

Zak: Sorta, it's actually kind of a hybrid.

Manson: I had AD&D, I got DMG, I gots Monster Manual, I got pewter figurines.

Zak: Did you color in your own dice?

Manson: I didn't color in mah own dice, but I painted the pewter figures.

Manson: I did a base coat, did a overall coat--I put the paint on all wet so it went down in the cracks.

Zak: You did a wash.

Charlotte Stokely: Should I call you Brian or Manson while you're here?

Manson: Call me God, call me Overlord, call me Boss, call me…well I guess you can't call me Dungeon Master because you the dungeon master. I like that tattoo son, it's like Carcosa--I got that Carcosa tattoo too right here. 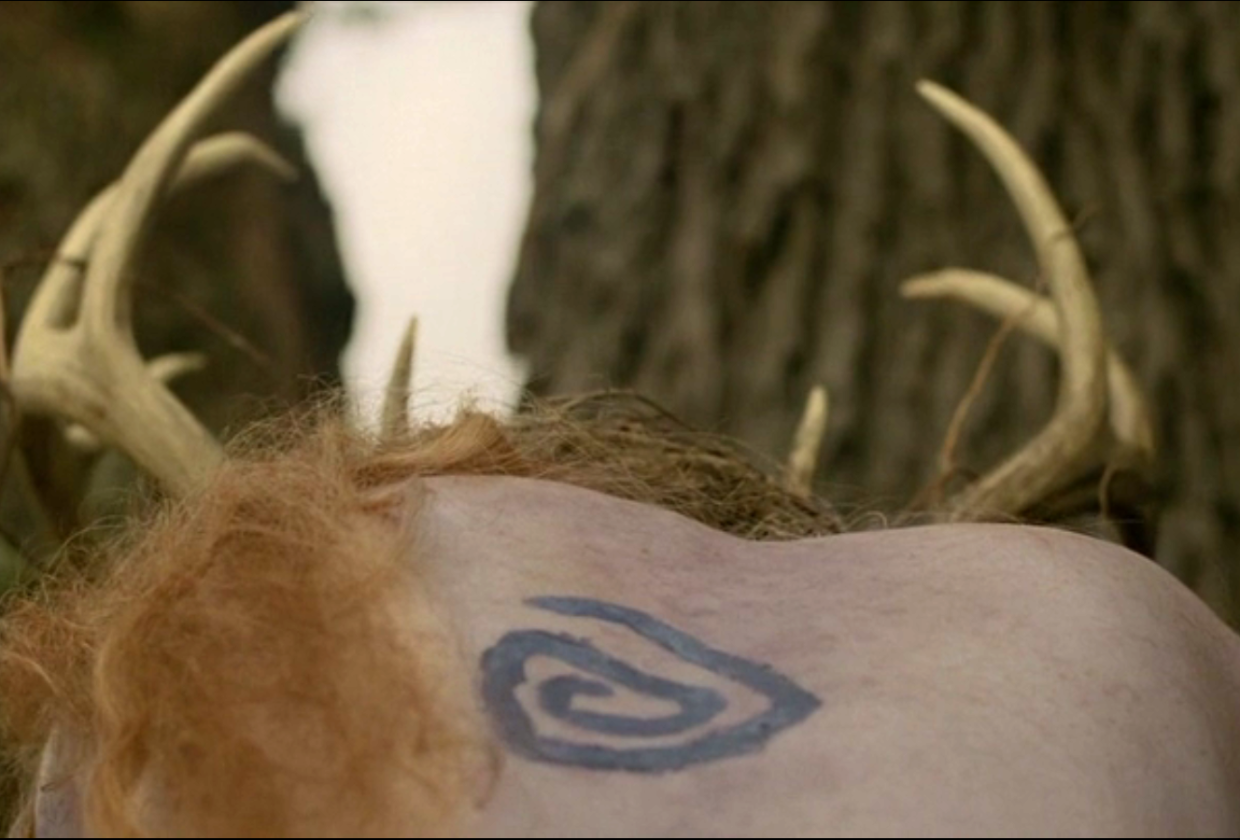 (I take Manson by the glove and hold both our spirals up to Stokely's face in an attempt to hypnotize her. It doesn't work.)

Zak: You probably haven't heard about the Carcosa D&D module--but you'd probably like it.
(brief pause for Laney and Twiggy to get married)

Zak: You were an elf wizard weren't you?

Manson: Nah, I was the dungeon master.

Zak: You didn't ever play a character?

Manson: I was into the drow.

Zak: Were you an elf thief?

So there you go. Everything they say about Dungeons & Dragons is true.


And congratulations to Laney and Twiggy…. 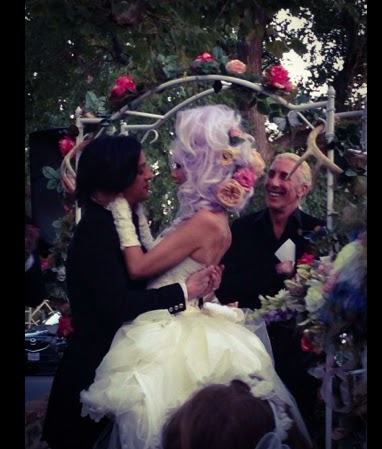 Weird footnote: the same day I did this thing on Manson, his ex did a thing on me.
-
-

I wasn't there, but from the pictures and the description it really looks like it was a fun and cool wedding! best blog ever.

Awesome. Need to go to more weddings where people are having a genuinely good time.

I love it that Dee Synder was the Minister

I can't imagine anyone better.

I really got a kick out of reading that. Thanks, Zak! I'm going to show all this to my wife (who is into heavy metal).

The before-during-after conclusion? A+.

Definitely! Was practically falling off my chair laughing. :)

You can never tell who's goign to turn out to be a D&D player or where you are going to meet them.
I was hanging out with a number of latinas one night bar hopping and we ended up going back to the apartmentof one of the ladies and decided to go play pool in the sub-basement,on the way down we ended up passing a group of guys sitting around a table in the basement that looked like a gang out of central casting (baggy pants, bandanas, shirts buttoned at the top only)... and they were playing D&D. I lingered said hi, what-ya playing, how long you been playing, got friendly answers and followed the ladies downstairs.

You've been to that wedding before, and you will be there again. Time is a flat circle. Black star rising.

But for serious, I wish half my players haven't already seen True Detective, or I'd totally rip off that plot whole-sale.

Death created D&D to roll the things it would kill...