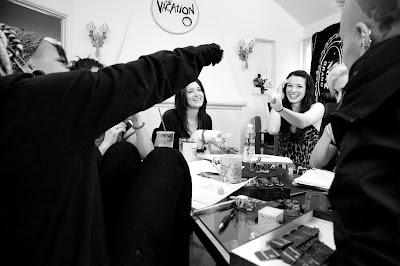 Sometimes someone will try to devise games or ways of playing games by starting with their problems (not enough gamers, games make people cry, games are in my butt, games bit my sister) and trying to fix them. But you can't do this if you don't have or care about these problems.

Still: it might be nice to have some principles.

In philosophy you can develop goals and ethics by imagining the perfect end result and reasoning backward from there, toward all the conditions that would be required to make that thing come true.

So, in games, could you imagine the most perfect possible moment in a game and back-engineer everything you need to try to do from there?

On the other hand--moments that are awesome but could have come about without playing the game--very good owlbear jokes, the entire session collapsing into a GGGGB orgy--don't count.

Although nongame things (decor, snacks) can be part of a game moment, at a perfect moment, or even just a really good one, those things cease to be present, the way peripheral awareness melts away when you watch your freethrow roll on the rim before it sinks in the net.

So, the Perfect Moment:

I don't remember what was going on when that photo at the top of this page was taken--it probably wasn't the perfect moment, but from all the evidence in the picture it could have been. Let's assume it was and describe what's going on.

Start with a pair of easy ones:

There have to be other people there for there to be a game. If it's perfect: it's all people you like.

Real life games, assuming all other things are equal, beat online games. And let's assume you're comfortable, undistracted, and well-snacked while we're at it.

In the perfect moment, everyone there is imagining the same thing, or at least all simultaneously imagining something that's close and very good ("good" in every sense--we'll get to that later). The perfect RPG moment is a shared moment.
The ability to do this isn't unique to games--most kinds of oral storytelling can have this quality, including stand-up comedy--you all summon the same mental image at the same time, you all react to it at the same time, and you also all enjoy the feeling of everyone around having that simultaneous reaction.
It is an unusually focused and rapid kind of collective effervescence and possibly at the heart of the sympathy between cult-like behavior and RPG behavior noticed by False Patrick.

Creativity exists in a certain tension with simultaneousness--if the word picture painted is too obscure (the giant killed by the soundwaves from the collapse of a baby universe teleported into his ear)--you might have an imaginability problem--everybody's got a different idea of what they're seeing and in most cases all the images aren't equally good.
You have to pave the way for imaginable creative moments during play, build up the picture, get people on the same page.

I'd argue victory is what's going on in the best moment by logical deduction:
It's self-evident that, in the best moment, all the people at the table should be people you like.
It's self-evident that you would want the perfect moment to be untainted by any vague empathic assumption that any of these friends might not be having an awesome time.
While everybody has a wide variety of aesthetic experiences they might like (I like lots of depressing movies), it is also true that, if you're looking for a definite overlap: everybody likes to win.

There's a loophole:
Maybe you know for a fact (before the perfect moment happens) that everyone at the table loves it when a player gives a fantastic spontaneous death speech--even more than they love winning. I'd say ok: what you need is not necessarily victory but a moment of some other thing that you are 100% sure ahead of time everybody at the table agrees is a good thing to have happen. Achievement of a thing so locally agreed-upon as cool you could call it a goal. Which sounds a lot like a kind of victory, come to think of it.

Beautiful moments in games can have a quality that beautiful moments in no other medium except real life can have: they can be earned. Hamlet can, technically speaking, avenge his father whenever Shakespeare wants to write it into the play. Hamlet as a PC, however, is restricted from doing so until all the rules have been satisfied. An earned moment is one that could not have happened that way had a specific set of previous, not-guaranteed events taken place.

A game makes it possible for the feeling that it's not just that the wonderful moment happening it's also the simultaneous sensation of seeing all the old pieces retroactively falling into place so that it could. The sudden appearance of order from a previous disorder--if we're talking blue-sky moment, we might as well throw that in.

Earning is kind of the opposite of foreshadowing--realizing significance after the fact.

By the above definition, a moment can be earned by pure chance--this die roll, then that, then the other--and that can be fun. But in the perfect moment the players have had to stretch their minds into new places in the course of earning the moment--and thus actually become a little bit better at thinking--during the course of the game.

This can be done in more than one way: creative problem solving is one way, but any other time-crunched creative moment--like suddenly making a great speech, or devising a great plot twist--is a kind of exercise. You had to extend yourself to do it--it tested you.

(I have heard the theory that games should offer moral exercise--that is: they should help people extend their ability to feel sympathy and imagine the lives of other people. I have seen great novels and movies do this, so art can do it. However, since every attempt thus far to do it in games assumes players are all Louisiana sheriffs circa 1958 and must work toward greater moral understanding from there, they seem to offer less moral exercise than just interacting with the actual people in the gaming group does.)

Many of the details in the best moment would be unanticipated. This forces the moment to be explosive--revelation comes all at once. Ok, what AC am I trying to...NATURAL 20, BITCHES! Surprise can be a result of real exercise and creativity, but it can also be provided by purely mechanical randomness. All three is the best, of course.

The best moment would also be, at least in some details, anticipated. This paradox is familiar to anybody who writes any kind of story or joke--you create an expectation and you do something with it. Not always fulfill it, not always frustrate it, but, like a good punchline, you find a way to do both.

The tension built up feeds the payoff.

If winning is good, winning a lot is better. Personally, I like death as the stake: if you like a game, there isn't a higher stake than your ability to keep playing the game, at least with that character, in the way that character allows you to play it.

Other staked consequences, despite being more creative, always either aren't harsh enough to create that tension or they simply threaten to render the character less fun to play (you're three years younger and made of fish flakes! Congrats!), so that giving up and rolling a new one--as if you'd just died--is preferable anyway.

Some people will tell you this and I believe them: the pleasure in the cathartic moment of beating death is offset by the anxiety of worrying about dying up until that moment comes. I can't help them. They'll need a game I can't run.

Knowing the stakes shades into foreshadowing.

You'd think, what with all this talk about climaxes and victories, the best moment would be the last moment, but I don't think so--because that is always going to be tinged with the regret at the campaign ending.

In a perfect moment you unconsciously expect many more like it around the corner--so the moment's as earned as possible and so ties up as many loose ends as possible, but promises more possibilities suddenly open up.

In the best moment, everybody at the table would not only imagining the same thing, but contributing in that moment to that thing. This quality isn't easy to achieve, and it's probably the one existing games are least set up to support in the most literal sense--even if one person is holding the giant weasel and the other is punching him or in a game like Tunnels and Trolls where combat value is a sum of everybody's scores, you still only have one person rolling the last killing die in that moment.


-
-
In a few days, if it still seems like a good idea, I'll write about what you have to do with games to make sure these moments can happen.
-
-
-

"In a few days, if it still seems like a good idea, I'll write about what you have to do with games to make sure these moments can happen."

Seems like a good idea to me Zak. As someone who has come back to role playing after a few years, and is the dungeon master for a group of relative newbs, I would very much like to read what you have to say about the 'how' of this matter. Thanks for the great blog.

I am bad with faces, and this is only tangentially related, but;

1. Is that KK opposite you at the table; and
2. Does KK always sit opposite you at the table; and
3. To get a perfect moment in a game, it would seem you imply that we might have to play (at least) a few sessions and arrange things both in game and out game as players to allow such a moment to arrive. If we seek to approach the perfect, are such things as player placement around the table vital and important or beneath our notice?

(I am possibly jumping the gun of the 'few days, good idea' post, and also may be obsessing over details in advance of GMing for the first time for a while.)

Player placement is not paramount. Just make the arrangement convenient and comfortable..

Just really good writing. What a great ability you have of describing our shared imaginative hobby, of explaining the healthy, necessary experience of shared story telling rpg's bring. I use your thoughtful posts to inform my intent when I get the chance to sit around the gaming table. Once again, thanks.

I have found that it's nice to have a player who has never played RPGs before sit next to the DM, because it's easier to communicate with someone when they're closer. Not necessary, but I think it helps. Also if a player is hard of hearing I will try to get that person to not be the one seated at the opposite end of the table from the DM. But like students in a college classroom, everyone tends to sit in a preferred place and especially after a couple sessions will form an attachment to the place where they sit. Turning the room around can shake that up.

All that is really just aiding "convenient and comfortable" though.