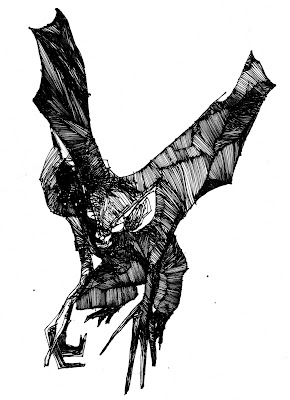 These are hybrid creatures that, through necromancy or unknown science, have the characteristics of both a humans and an animal—hunched maggot-people, children with the heads of lizards, jaguarmen, etc.

Though there is nothing inherently wicked in their make-up, rejection due to the prejudices of humanity or the circumstances of their creation may lead them down furtive, dishonest or violent paths.

Generally the animal part of a zoomorph expresses some emotional aspect of the human that civilization dampens: the tigerwoman is vicious, the man-toad is repulsive.

Zoomorphs created by science often exist in an ironic relationship to these traits—they may be quite ordinary people or animals underneath (and they are essentially like artificial life-forms, so see the Design Notes there for some useful info on how to run them). Zoomorphs created by magic or which are part of a hidden race that has been on Earth all along follow a more symbolic logic—the jackalmen will indeed be clever and skulking.

As with swarms, the Host should emphasize the sensory strangeness of the hybrid form as much as possible and not allow the players to become comfortable with the creatures as simply a fantasy-style “other race”—zoomorphs are closer to the sources of magic and disorder than the party (except perhaps The Problem PC), and their movements, ideas and speech will reflect it.

As animal, plus: hybrids with small animals may have natural abilities/characteristics which go unnoticed at their original size but become meaningful when scaled up—like an ant’s scissoring mandibles.

Camazotz (the man-bats of meso-america)

Echolocation: Camazotz can “see” in the dark using echolocation (normally too high-pitched to hear).

Shriek: Standard attacks on everyone in hearing range at Intensity 4.

Claws: Cause damage and grapple in the same attack.


Maggot Women (a larva-like body with a human head)

Prophecy: Maggot women can read a target’s future by rubbing the target’s face across their belly—in addition to conveying any details of the future the Host can reasonably guess, choose 3 cards for the target and describe what each means. The numbers of the cards will be the first Throws to come up when they encounter the people, places or situations depicted. Once the situations are encountered, one of the cards will be given as a reward.