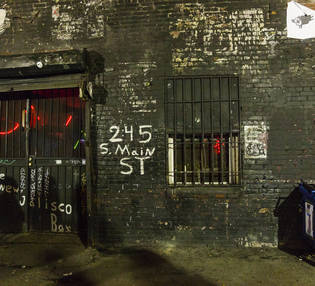 I live in downtown Los Angeles and this is all true.

Downtown LA is literal Raymond Chandler territory. A sign over a urinal near here says "Charles Bukowski pissed here". Mickey Cohen, too. Blade Runner is supposed to be set in downtown LA.

A place of desperate souls, inches from Skid Row. On weekends the sidewalks are a 4d maze of taco trucks and people trying to get into nightclubs. Hipster clothing stores arrive and die like mice in the cages at the CDC. Grown men commute on skateboards past fashion models heading up to the big agencies on 5th street. Sirens constantly. The easiest way to avoid getting stared at by security is to get them to stare at the guy with the MS13 face tattoo instead.

Last week I headed to the bar for a stiff drink.

That's not so weird. It takes all kinds.

Then last night I'm in a whole other bar down here.

This bar is one of the oldest in the city, but also a Pokemon gym. The kid behind the bar is the champion, he takes out customers left and right--they have no idea it's their bartender kicking their asses.

"How's your game going?" he says. He's talking about Demon City. I show him some of the art on my phone.

"What's that?" says the other bartender.

This was not the conversation I had intended to have with my bartenders.

"Oh yeah?" says the second bartender "Me and my dad are working on an RPG! A kinda Bronze Age thing!"

He tells me about the dice mechanics. I tell him I got the idea for my game working on the new edition of Vampire, he tells me he was really into Werewolf.

At this point the stripper I'm waiting for comes in.

"Good luck with your game, dude!" says the bartender as she rolls up. Very loud.

Jesus, I think, can't a man have a drink in this town without having to talk about goddamn Dungeons & Dragons?
-
-
-

My dad was an RTD (Metro's old name) driver for awhile, before he moved into an admin job, and sometimes I'd go ride his bus all day, meet his regular passengers. When he drove a route downtown, we'd have lunch at the Greyhound terminal - 7th Street, I think - or at Clifton's, sitting as close to the fountain as possible. Years later, it was clubbing down on Grand - Vertigo, where the doorman used to work Studio 54's rope, and other places that came and went every few months - followed by breakfast at Gorky's at 3 am, with the dollop of sour cream and caviar alongside a Chopin omelette, sitting at long tables and drinking black coffee from stoneware mugs.

Cranes and Ham & Eggs are my favorite bars in Downtown.

My dad was lucky enough to live in L.A. in the early-mid fifties and he always spoke of it fondly.

That's cool as the 8th layer! Here in Salt Lake you've got Mormons playing with atheists (me). "cats and dogs living together... mass hysteria!"