How To End A Campaign 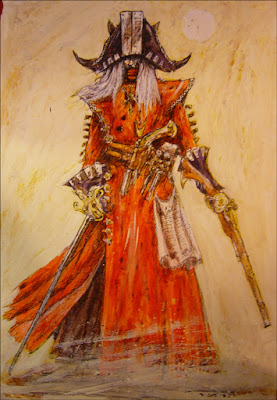 So we're playing Rogue Trader...
The first session the Seneschal (played by Dorea) decides the best solution is to assassinate someone inconvenient on a star base--I missed that session. The star base goes into lockdown to prevent the assassins from escaping.
Second session is all about getting off the star base, which we do by showing one of the Imperial higher-ups how spiffy our ancient ship is (40k imagines very Deep Time with its vessels in a future devoid of any progress outside space marine helmet design. Also the ship has a crew the size of the population of West Virginia), with its many hunting trophies (turns out he's a hunter), we go "Say...we could take you on safari, Admiral...?"
"I say! (monocle monocle) Capital notion! I haven't been out hunting in aaaaages!"
Upside: the admiral helps us, bureaucratically speaking, to get off the base.

Downside: the captain decides he's cramping our style.
"Admiral, we've come upon a junglous deathworld! Would you like to go hunting with us?" The captain wants the Admiral to quietly die down there, most of the crew doesn't like the idea of anything called a deathworld. I haven't gotten to play much so I'm pretty excited to go to a deathworld. I vote deathworld, we end up on the deathworld.

We go to the deathworld long story short it is well-named. We lose our captain, near tpk but at least get rid of the Admiral.
After a few more adventures we notice...hey...it looks like, on our massive ship with a crew in the 5 figures, we have a genestealer cult on board.
Obviously and unbeknownst to us we'd picked up the genestealers on the deathworld and they'd been growing geometrically ever since.
After some more tests and shenanigans we discover the infection is massive. 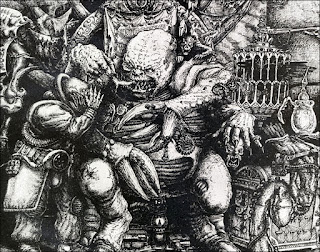 The guy playing the captain goes "Hey, can we switch to playing Deathwing for a few sessions, and play space marines who are on the ship to kill the genestealers?"
The GM is cool with this.
We make space marines. The seneschal player and I both make jump-pack equipped close-combat marines with chainswords. As soon as she wakes up in the game she's like "Genestealers? I got Hatred: Genestealers, let's pilot the ship into the sun!"
My character prevails on hers to maybe play the game instead, we're Space Marines, assets to the Empire, we need not throw our lives away when we can wipe out the enemy and live to kill in the Emperor's name again. 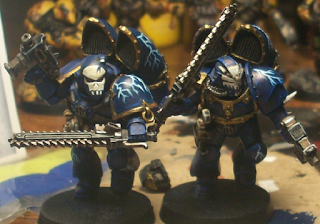 So we spend a session bug-hunting cultists and accidentally trashing parts of the ship.
Then, long story, the hater stumbles on a chamber honest-to-god filled with horde levels of genestealers right next to the engine-coolant tanks. This is, for those familiar, a 60-point horde.
The rest of us marines are 2 rounds behind her finding this place.
We arrive to find her having already chainsworded open a massive tank, freezing genestealers everywhere in a fountain of coolant spraying all over her armor with no regard for life or limb and halfway through ripping open the second tank.
Frozen and shattering the genestealers die prettily. After a round of rolling very well we manage to cut the 60 point horde down to a 3-point horde.
Next round--she jump packs straight toward the next coolant tank.
"There's only 3 left, Dorea! Can I stop her??"
"Roll initiative"
She rolls 8, I roll 7. Oh wait, I get a +1 to initative bc the system is too complicated long story I roll 8.
Simultaneous actions--she's jump-packing toward the final coolant tank, I'm jump-packing toward her in mid-air, trying to deflect her flight path so she lands in the middle of the horde and does not end up ripping open the last coolant tank. 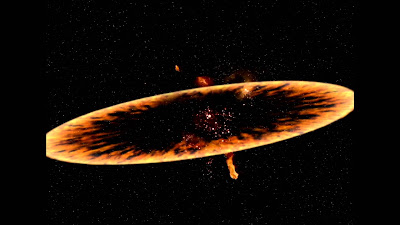 Well that's one way to do it. LOL Sounds like a blast! Also it was cool to see you used one of the photos from my good buddy cheetor's blog: https://sho3box.com/2014/02/14/deathworld-jungle-1-armorcast-alien-plants/

Awesome. I can just hear a thousands GMs screaming: "B-but my prep! We can't just let it end!" This sounds a lot more satisfying.

not going to lie, that sounds awesome.
sure the campaign came to a sudden end, but it was still a hell of a way to go out.