Those Who Crawl To A Godless Place

New demon, suitable for any game, with Demon City stats.. 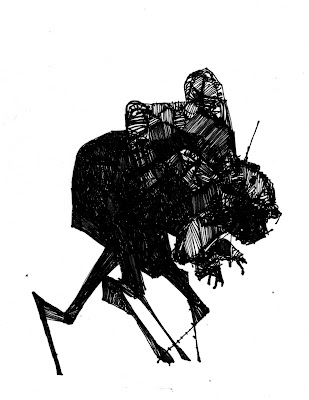 DEMONS OF THE SECOND ORDER

The Chagidel are Insect Demons—their goal is to obscure, becloud and misinform and to thereby inculcate misrule. Enormous compounded scrapyard hybrids of insect and human, shaped as if by an art movement holding a impatient hatred of all that is as intended as an indelible virtue.

They come always as advisors. They ensconce themselves in the offices of the mighty, when the low hirelings and janitors have gone, and whisper to them in shredded voices, promising wealth, counsel, and companionship. Their minds are laboratories of effective fallacy and convincing invention. Their goal is chaos in every discourse, and the elevation of the unworthy. To this end they will serve the wicked, they will slay the living, they will skulk, they will whisper strategems and secrets to those in high places.

They cannot acknowledge any fact that exposes a lie they have told, and to do so would destroy them—if they say a man is a thief and another confesses, they can say nothing, not even to deny it, for to do so would acknowledge it has been said and they would then be undone and fucked beyond measure.

Their true names have two parts of two syllables each, such as Or’qvi Ein-et. They can only be summoned by one who has acquired two gifts due to two separate lies told in two separate homes to two separate souls in the last two days and the summoning requires a sacrifice of twins exactly two years old with two separate blades made from two separate substances on a night when the planet under which they were born is at its maximum distance from the one which the necromancer was.

Demonic: Demons don’t need to breathe or digest, don’t age, and are immune to poison, etc. and cannot be mentally controlled with psionic abilities. Animals will avoid demons in any form. Explosives do not harm Chagidel but firearms do.

Babel Effect: In the presence of Those Who Crawl (within 100’ and they can see the demon or it can see them), all earnest communication is distorted. To simulate this, Players can only announce their characters’ actions—not words—no questions, no clarifications can be voiced out loud. Players must whisper or write down anything they wish their character to say directly to the Host, and the Host then relays this to the other players, but must change two words. If the player violates this rule, their character mishears something (Host: invent something) and acts on it, and to enact this, the Host takes control of the Player’s character for one round. Players may talk normally only if announcing a specific nonverbal action their characters are taking.

Climbing: The Chagidel can climb across any surface at a normal speed.

Minions: Chagidel are served by insect Swarms—these most often appear near the scenes of crimes committed by the demon or its pawns in order to harass those who later investigate.

Invertebrate Parts: Those Who Crawl appear in a variety of hybrid invertebrate forms, their bodies can include maggot torsos, caterpillar limbs, antennae, insectile eyes, spider legs, leech faces, the wings of moths butterflies or flies, scorpion stings, etc. Their agility should be based on their appearance—a demon with a slug belly will probably be a 2, one with a flylike physiognomy could be a 6. If they have a sting or venom sacs, assume this attack does Massive Damage but can only be enacted after a successful grapple. Wormsilk or webs should have a strength of 6. Some also may be coordinated enough to enact attacks which effect 2 targets per round. Feel free to stat up anything you can envision.

(possibly) Vile Larva: Those Who Crawl are loathsomely fecund and are often summoned when pregnant with repulsive young. The first successful attack on a Chagidel that pierces the skin (interpret any successful attack that could do this as having done so) releases 1-10 misshapen spawn and 1-10 more emerge each round thereafter until a maximum of 10 emerge.

Calm: 1
Agility: 1
Toughness: 1
Perception: 1
Appeal: 0
Cash: 0
Knowledge: 0 (but born able to speak and knowing the names of anyone it meets)

Note the spawn can climb and have invertebrate parts but have none of the Chagidel’s other special abilities.

If Those Who Crawl lie and it is disproven, they cannot by any means acknowledge the fact that disproves it.

Non-verbal? So people speaking in sign language are unaffected?