First: new I Hit It With My Axe episode

(Second in a series about how Art History is Actually Adventure Hooks)
So the official story is this is a late Piratey Era painting by Jan Matejko. His art was censored by both the Russians and the Germans on grounds that he depicted Polish history, the existence of which irritated them, and this particular piece was stolen by the Germans in the 40s on the grounds that it was not nailed down then (in an irony that pretty much sums up Polish history) returned by the Russians in the 50's on the grounds that they basically owned Poland so they could afford to be generous. History Painting (more a genre than a movement, but a big deal in the 1800s) was a generation before straight-up Realism (which typically had less lush color, and focused on contemporary subjects) which Matejko's students would adopt.

It depicts the semi-legendary Stańczyk, satirical genius and jester to three Polish kings for at least 40 years during Poland's Renaissance being depressed about the Russians taking Smolensk while a brushily executed ball (or just a few people talking in a lobby?) takes place on the right and a comet streaks earthward on the left.  It's an important and iconic image in Poland according to the thing what I read and the number of weird red-suited parodies of it on pages in Polish that come up when you google image search it and Matejko is to Polish history what Wayne Reynolds is to Pathfinder--basically if it happened to Poland before Matejko was born, he painted it.

-"The title erroneously suggests that Poland was at the time ruled by Queen Bona Sforza, when in fact, on July 30, 1514, when Smolensk was lost to Russia, Poland was ruled by King Sigismund the Old and his first wife, Queen Barbara Zápolya".

-Sigismund survived an assasination attempt by an unknown assailant in 1523.

-The country experienced an uprising known as the Chicken War during this same period.

Although attributed to Matejko by the Soviets (who decided they liked the idea of the most famous Polish painter's most famous work being a clown who's sad about losing a fight with Russia), it is in fact much older--having been painted in Osc Lithicum by Haerlaen Qinzael during the reign of Sigismund the Old, while Stańczyk, the Great Ioculator, was yet living.

It hung for many years in the Snail Quarter headquarters of the absurdist anarchist Cult of the God That Laughs and depicts Stańczyk brooding not over the loss of Smolensk but over his unsuccessful assassination attempt on Sigismund earlier that year.

While outwardly a loyal subject gently but cleverly tweaking the foibles of the Crown, Stańczyk was a spy in good standing for the ruinous Cult.

The Cult's foundational beliefs are based around the idea that, in their formal and named forms, comedy and democracy emerged at the same time (the 6th century)--and it considers the former absolutely necessary to inform the latter. Just as Aristophanes mocked the Athenians in order to tell them who to vote for and against (ok, mostly against), the Cult sees the creation of amusing viral absurdities as necessary to spreading the Laughing God's message of universal disorder. The Cult's actual aims are variously populist, nihilist, socialist, apocalyptic or merely liberal, depending who you ask and which branch and era they are familiar with.

Only marginally more successful than the assassination attempt was the so-called Chicken War--while history records that the name derived from the popular notion that only chickens were harmed in the anti-monarchist rebellion, the name actually came about because during this period Stańczyk had managed to introduce an hypnotic pheasant into the court of Sigismund the Old, which strolled from room to room whispering bad advice to generals and advisors until the fowl was discovered and traduced by the Minister of Wells.

At any rate, in the manner of all Laughing Cult artworks and artifacts, the portrait of the undiscovered traitor Stańczyk contains esoteric clues to the mysteries of the Troupe--in this case the combination to the Cult's vault in Vornheim.

It comes in the form of a spread in the Nornrik Tarot (the word "Karkivit"--Northen Elvish for "6 Cards" is written on the message in the center of the painting): 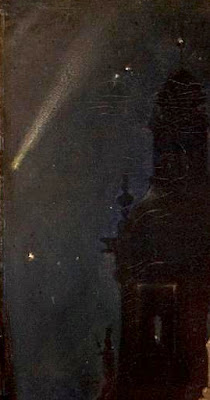 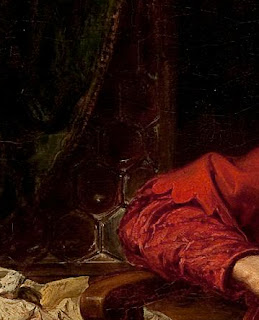 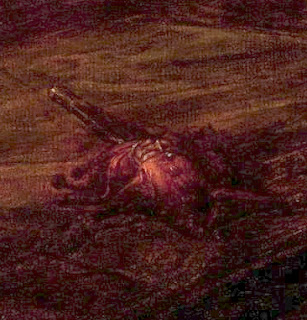 Stańczyk himself is a 14th level Thief or Rogue or Specialist or Assassin, like all members of the Cult he has access to one Joke which, due to issues of timing, pronunciation, accent, etc only he can properly tell.  These Cult Jokes have the following characteristics:

-They are cruel and target one intelligent creature present.
-The can only be effectively told once to any given audience--the joke's power is lost if anyone present (aside from the teller) has heard it before.
-These impressive jokes shake and humiliate the target such that, each morning thereafter, s/he must make a wisdom/will/spell save or lose a point of charisma. This continues even after a day's save is made until the victim is reduced to a timid husk, incapable of any action.
-The joke's devastating effects can only be ended by gathering the same audience (or such members of it as are living) and telling a funnier joke at the Cultist's expense. The counterjoke must make the god's laugh (practically speaking, this means it must make the majority of the players at the table laugh--and genuinely). This reverses the effect of the joke completely.

The Cult's vault is rumored to contain:

-The immensely compromising diary of Queen Bona Sforza, a Cult member, including intimations of improper contact with the most powerful wife of a prominent Eastern Monarch.

-Coins of many nations.

-A Goblin Marotte which, when shaken by any creature of that kind, causes changelings to laugh and thus reveal themselves.

-A Sforza family tree, accurate up until the current date.

-A report compiled from various sources on the senses of humor of the world's monarchs covering the last 600 years written with an eye toward practical use--including topics and formats likely to gain favor, offensive subjects to be avoided and reports on the success and failure of various specific attempts to amuse them.

-A secret Deck commissioned by Franceso I Sforza consisting of portraits of his family depicted as Fools and variations thereupon--the Idiot, the Joker, the Ioculator, the Jester, the Joker, Le Mat etc ... As only Foolishness is universal and only Fools behave the same regardless of context, this Deck is said to have ultradimensional properties such that for any deck (including any world's Deck of Illusions or Many Things) there is a card within which can be inserted into it and subtly rewrite the esoterica of that world--causing suits and arcana to shift, altering sowing seasons, changing spell durations, renaming gods, etc.

-A painting entitled The Poisoning of Queen Bona painted before the poisoning took place likewise painted by Qinzael and inaccurately attributed to Matejko in the modern era: 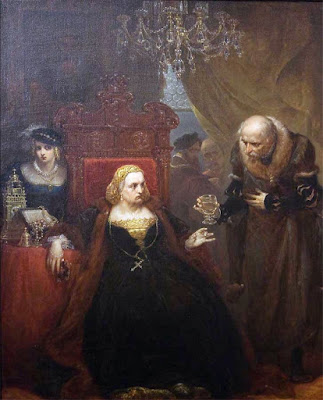 Email ThisBlogThis!Share to TwitterShare to FacebookShare to Pinterest
Labels: adventures, art, Art History For D&D People, I Hit It With My Axe, items

Now you have me wondering if there is an ominous interplanar crystal chandelier and a transdimensional bottle glass window in each of his paintings.

Man, you're' really on a roll.