Emergent Cannibalism and the Art of Milo De Fretwell 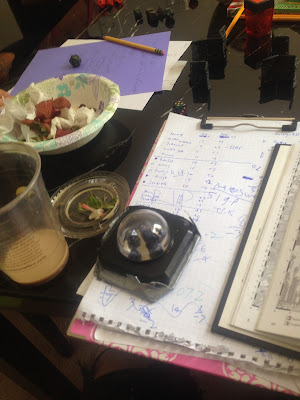 So last game just the blondes showed up--and it was a total party kill.

This time folks were more cautious, but it still got weird real fast...

It all started with some rules:


-I said roll 3d6 for ability scores instead of 5e's usual 4d6-pick-the-highest.

-I made a Witch class that gets d4 hp (details later)--like wizards do in my game. 3 people are playing it.

-Morgan rolled like a 5 or a 6 or something for Con. That's a -3 or -4 to everything to do with Constitution.

-So Morgan's witch--Sendrelle--is getting 1 hit point per level. No matter what.

-And since equipment is random, nobody bothered to buy any rations before going into the dungeon.


Then there was the dungeon itself:

-Maze of the Blue Medusa has hunger on the random encounter chart. If you get that result, you have to eat something in the next 10 minutes or you lose 2hp. 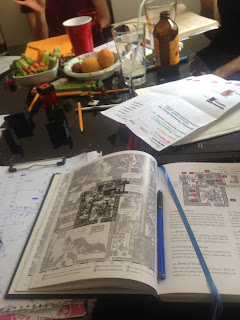 -There's a room where a corpse hangs. It is the corpse of the last person you killed. It explains to you what you could've done to avoid killing it.

The players see the corpse, then I roll this, I tell the players. Sendrelle the witch has 2 hit points. After a few minutes of floundering ("Wellllll thoroughly searching the room takes a Turn which is ten minutes so if you find nothing Sendrelle dies...") she gives up and runs back to the corpse room. Soon Sendrelle and everybody else is eating fresh Oku corpse.

So that was fun.

The other thing that happened was later the party ran into "The Screaming Face of My Wife" by Milo De Fretwell--the painting that makes you moan and collapse weeping for 5 minutes if you fail your save. At exactly the same time, some stealthy Chameleon women began uncoiling in the next room.

Sendrelle hung back on account of having 2 hit points, and pretty much two rounds later everyone else in the room (party and chameleon-warriors) was either unconscious or weeping uncontrollably. She slipped in, cut some chamelon-throats and that was that.

This worked so well the party decided to sleep in the dungeon under the painting. So far the spellcasters have gotten through 1 of 8 hours needed sleep and 2 more groups of wandering monsters have fallen victim to the painting.

I love D&D. Have I mentioned that lately? I love D&D.
And now, a word from our sponsor:

It's always fun when the character who rolled low scores survives against all odds while "Captain Attribute" who rolled three 18's in a row dies at the first encounter. :)

After months of chips and Little Debbies, you'd be surprised how well received a veggie tray can be at the game table.