You Are Being Lied To (on Indie Press Revolution, pay rates, transparency, etc)

As you may have heard many times here, RPG pay rates are pathetically low and exploitive.

-One of the exploitive companies, Indie Press Revolution, posted a job offer yesterday.

-People got mad via viral outrage tweet (because, like, emailing the company and engaging them didn't occur to them, because it literally never does).

-And the usual suspects acted like both of those things were ok and there should be no consequences for these stupid things happening: 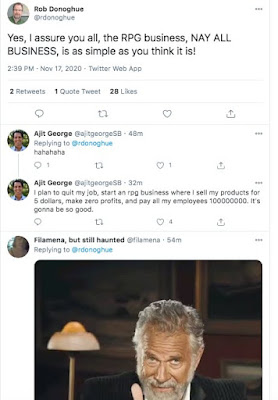 I'm going to explain how we made money in RPGs, and why these rates are, yes, exploitive:

So, at LotFP, and at other companies that copied LotFP like Satyr Press, money worked like this:

-You make a high-quality hardcover product and sell it for a lot of money. Like: Red & Pleasant Land cost 30$. "High-quality" here doesn't just mean "I like the author or artist" it means "the binding stays together, the printing is the best quality we can find, whether or not you like the artist or writer, we hired people we liked and gave them enough time to do work they liked". RPL took 3 months on writing and art.

-And that's before pdf sales.

-And then, often, you sell more copies or a comparable number of copies the next year, because a game that's high quality (again, not meaning you have better taste than everyone else, meaning: no matter who wrote or drew it: you gave them time to do their work and you actually like their work) is a perennial seller.

Now, the companies like Evil Hat, who are defending IPR, work on a different business model:

-You do not hire the people you consider the best people. And even if you do, you pay them a small amount of money--6 cents a word is considered a lot, which is subminimum wage---and give them a relatively tight deadline.

-You push out a lot of things like this quickly. Rather than selling the product on quality, you sell to an existing audience of fans who just wants the next thing, regardless of quality.

-You do this a lot in rapid succession.

-You sell a small number of copies for a low price.

-These products do not much win awards, because even if you want to say the people who illustrated them and wrote them are good, they didn't have much time and weren't paid well. (This is why once next-generation hardcover OSR games were on the ballot net to these guys in fan votes they all cleaned up.)

-The products do not have a long tail. Nobody much talks about them the year after they appear.

-You tell all your fans it has to be this way because they, the fans, refuse to pay more for RPG product.

-You could not possibly, like, try harder or hire better people or give them more time or maybe re-think the Theory Of How RPGs Work that made you decide this, of all products, was the one you had to make and thus maybe create a product that sold better and was reviewed better.

-You spend a lot of time on social media cultivating an audience that thinks anyone who criticizes this has an evil agenda.

-You mollify the audience by pretending to have anti-capitalist ideals when you are, in fact, doing all the bad capitalist things: exploiting your people, giving customers a lackluster product that you know could be better, all to support your dream of being able to say "I'm an RPG publisher!".

-People buy that because your audience lives in an echo chamber. They all tut tut about the state of the industry rather than realizing that you're a fucking nightmare excuse for a human being.

How does a whole firm making just over minimum wage, as IPR claims stay in business? Sounds fishy. Are they just distributing physical and digital product or are there other services provided?

I don't think it's "fishy" so much as: they accept their lot in life as distributing books that just don't sell that well and some probably have other jobs.

They consider it their mission and their hobby and their idealistic dream to help a bunch of toxic, abusive, harassing indie game developers sell games to each other and to a small group of people who don't know any better.

The entire scene they came out of not only includes authors who are 4chan posters and Something Awful goons but -all- of their major authors coalesced around people who read a guy with actual published scientific credentials who claimed Vampire: The Masquerade causes literal brain damage and instead of going "Wow, that's crackpot bullshit" joined his forum and asked him to please tell us more!

Like you can't make this stuff up. It's upside-down land.

They literally think that you just can't make better things.

Like you'll see people with elaborate multi-tweet rants about how these games that nobody plays for very long that only this insular group of people want are objectively better than other similar options.

That's an angle I hadn't considered. Though with that, trying to recruit others to their hobby gig seems like a fool's errand to me.

My initial read was in inoreader so missed the twitter grabs (Unless those were added in after.) These people are so close to identifing the real issue, but are still missing it by so much.

It's a strange dynamic they have:

-First: who cares that much about recruiting people to a hobby? Do they honestly think thousands of people they never met's lives would be improved by doing -their specific hobby-? I like playing RPGs, I don't particularly feel like other people have to. It's certainly not morally necessary.

-Second: A lot of them will admit to caring literally because they want to play with people. I ask you: most of the creators have been on the online indie RPG scene since the early 2000s, why the hell don't they have friends to play with them? Many of them will admit to only playing at cons. That points to them having much more serious problems than game design. Like Ron Edwards, who basically birthed the scene was on -my site- trying to find gamers to play with him. Wtf? In 40 years of gaming he hasn't made any friends?

-Third: Aside from the whole "moral mission to play games period" they're obsessed with the idea that their games are morally improving, when it's been tested and they're not: http://dndwithpornstars.blogspot.com/2020/07/an-unrepeatable-test-of-theory-about.html

-Fourth: for people who've been trying to spread the love for 20 years, they're insanely bad at it. Like I never thought "I like what I make, I am objectively certain it can and should be popular"--that's a crazy level of narcissism. I just was happy (and surprised) when it was popular. But, seriously, if they have a mission to be popular: why do they suck so bad at it? Still?

Nah, I added the twitter grabs after, when I saw them.

I can always tell the quality in a product like yours. I have published 2 games in 8 years and can't afford to go full time with it. However since it was self published and I was lucky to find some supportive artists I did OK but it was not enough for a salary. I am don't think I have the drive to give up my IT tech job to develop gaming product full time. I do think a good living can be made if you have the talent and focus to make quality product.

You're banned until you correct your incredibly lonnnnnnng record of misinformation and first-strike personal attacks.

If you maintain the attitude you've had in the past, your response to that will be something like "lol fuck you you're not my dad! I don't want to comment on your blog anyway!"

In which case: I hope that one day the situation where you value your time so little that you take time to click over to links you don't read and type messages that will never be received improves and you begin to have better things to do and that that gives you the strength to make the apologies necessary to become a responsible adult.

(Just for the record and because it's oddly on-topic I'll note that not long before the harassment campaign started, Venger Satanis tried to hire me to do an game thing for him but couldn't afford it. So whatever else he claims: he's a fan.)