So following on previous adventures, the girls' party were an actress (Stokely with Appeal: 0), a craft-services girl, and a bouncer. The only person they knew in common was a dancer.

She died, of course, in Mexico City.

The actress (class: Curious) was curious.

The craft-services girl (class: Friend) wanted to make sure the actress didn't get hurt.

They began their investigation in a bar (also ended it one, but that's the Downtime Rules for ya) and found out their friend had last been seen at the monthly party thrown by one of the richest men in Mexico City.

I made a little chart by googling famous people whose voices I could kind of do. 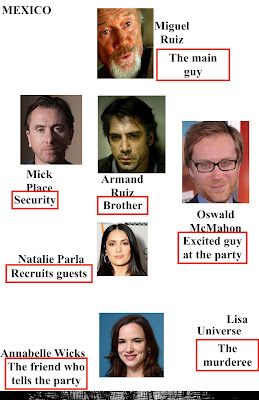 The party was in a mansion in the middle of a hedge maze. 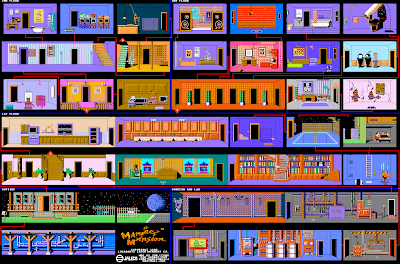 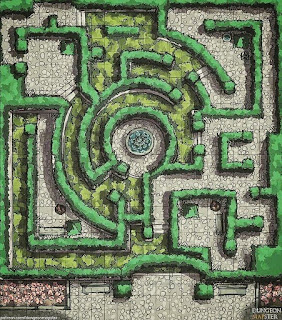 I got this hedge maze from dungeonmapster. The mansion was completely surrounded by maze, so I just made it so this square of maze repeated over and over around the house.

The girls had an alright time at the party, until everyone turned out to be werejaguars and started hunting them through the maze for sport. Actually arguably they had more fun at that point? Anyway point is they survived and kille Salme Hayek and are now Downtiming in Mexico City wondering if a werejaguar cult is after them (it is) and that's a nice place to start next week.

Using Maniac Mansion's map, is a stroke of lateral thinking genius ironically worthy of the game itself (bizarrely, I don't think any other adventure game has come close to the freedom allowed by this title - kind of a sad indictment on video games when one recalls the sci-fi predictions one had for them as a kid).

I don't know if it's "lateral-thinking genius" but the advantage over a regular map (even a labeled one) is that each room actually has details and furniture, so you can describe things easy, and if someone wants to know "is there a flower pot I can drop on him" well there you go.

I also think it's a good choice, and there are probably a lot of old adventure games with sufficient detail in their maps that they can provide a good sense of place. The map of Colonel's Bequest would be a solid starting point for a 1920s horror game.

I didn't know it

It gets more expansive than that with hidden rooms and the outbuildings of the estate since it's on an isolated bayou, but it's harder to find a complete map of that and a lot of the external screens are just connective tissue - it's dark, it's a swamp, there's a house in the distance on the next screen and not much else. But it's a great starting point.

I think that it's not known is a good thing; a lot of people know Maniac Mansion but only its idea and not its exact layout, and Colonel's Bequest is a second-string Sierra game so it's easy to surprise people. I don't think you could do this with like Monkey Island - too well known, and too few screens representing a single place in detail.

Perhaps Mr Kyle and Mr. Zak are familiar with the concept of a Gloriana Castle? Perhaps you have read Gomenghast by Mervyn Peake? If not perhaps you have played Backswords and Bucklers? In D&D the Caverns of Thracia sort of has that feel. So many ways in. Not so many out. Lots of nooks and crannies to explore or best not to.

The basic premise is this. New Castles built on top of Old Castles. Lost and forgotten rooms most likely best forgotten. Secret Passages that very few or none remember. Very easy for GM to add or subtract stuff. The players best mapping makes a fairy tale breadcrumb trail look secure.

For a PC Game these days a AI could be written that is constantly shifting the path behind as well as ahead of the players. Not to much so. Just enough to keep them on their toes.

I love Gormhenghast of course, and I've written about Thracia before: http://dndwithpornstars.blogspot.com/2010/12/why-caverns-of-thracia-is-best.html

...but the advantage of the maps used here for this (non-dungeon) game is not the complexity of the mansions but the presentation format:

By having a picture of every object in each room right there, it saves the Host time and energy that would've otherwise gone into inventing random scenery and/or reading text during the game.

Dude, please stream some games. I'd love to see this in action. I miss Axe, too.

If you want me to do that, you, the fans, need to not just ask me for stuff: