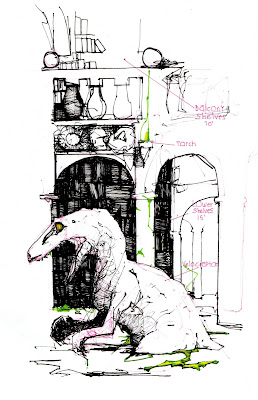 “…at times I have traveled for many nights through corridors and along polished stairways without finding a single librarian.”

While building the random encounter table for this one I considered the usual megadungeon inhabitants--NPC parties, escaped prisoners, maybe a vampire. But then I decided no, no intelligent monsters: I don't want anyone in there with you capable of understanding where they are.

The velociraptor in the library seemed to be exactly the point--its dumb staring chicken eyes just scraping past all that effort and thought and attempt to build and communicate. Dead people, whole dead cultures, trying to tell you--tell anyone really--something. And nobody listening. I liked that.

The Curated Destruction (Cube World Installment #3)
Each room of the library consists of one or more hexagonal galleries lined with shelves, with each gallery possessing a second balcony-level held aloft by wooden columns (reached by an immensely tasteful winding staircase in the southeast corner of each room), all executed in the warm and scholarly middle-fae style of southern Broceliande during the Second War. Unless otherwise noted (or flooded past 10’), each is lit by six torches in sconces set along each column. If extinguished the torches will be re-lit the next time the party returns.
It is the Curated Destruction, a semi-legendary library created by the elves to contain all useful knowledge and literary art. The hexagonal shape of the libraries’ galleries derives from the shaft libraries of the ancient serpentmen, the name derives from the method the elves employed to make these collections their own: since the serpentine libraries reportedly contained all possible literary works (all masterpieces, all possible inaccurate plagiarisms of these masterpieces, all accurate predictions, all false ones, texts containing only the letters xvi over and over, utter gibberish, this module, etc) the elves compiled their vast libraries by looting the shaft libraries and destroying every meaningless work.
The party has just found every book they could ever want…in among a practical infinity of ones they don’t.
This is a mammoth installment: 36 pages plus the map. The library-dungeon and all its sections, plus 100 rare books, over a hundred new items and the entire rest of a d1000 all-purpose dungeon treasure table. Plus a table of useless (?) books the PCs pull off the shelves

You can just email me if you have Venmo ( zakzsmith at hawtmayle dawt calm ). Otherwise: subscribe here for free and tip me 10.03$. 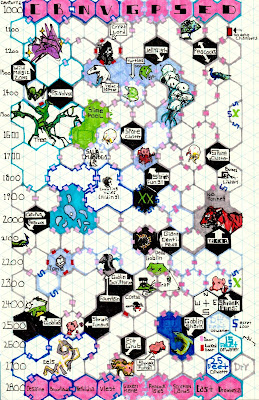 Hey Zak,the link to the hi Rez version of the motbm map in the book no longer works. Is there another place to get it?