You're gonna wanna get those floorboards looked at 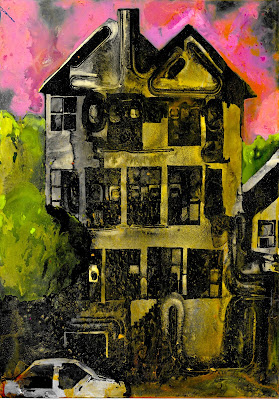 A haunt is a ghost that possesses an entire building as if it were a body, and it has no separate form. Its power is proportional to the number who have perished, terrified, within its walls. It seeks to expand these powers. That is: it terrorizes for the sake of increasing its ability to terrorize for the sake of terrorizing. It is in that way very human.

Exorcisms performed on haunts require an understanding of the nature of the violence which began the cycle. The haunt’s soul will be housed on the premises in some innocuous and fragile thing present during the originating trauma (a jewelry box, a portrait, a housefly), and this must be destroyed in order to exorcise the house. If the building is destroyed without exorcism, whatever else is on the land will be similarly haunted.

The basic adventure design for a haunt isn’t too complicated—the party is sent to investigate the building and it can “win” by research into its origins leading to the haunt’s soul, by crawling randomly around the premises until they stumble on it and items relating its significance, or by merely escaping and giving up after a session or two’s worth of amusing abuse.
However, in fine detail it requires some preparation—the Host should either mentally picture a large building they know well enough to describe room-by-room or prepare a map. In both cases, you’ll need to devise traps and effects that could happen in each room—the more variety the better.
Also—Hosts wishing to devise a HAL-like technological artificial intelligence that controls a building or starship should note that such a creature could work, mechanically, very similarly to a haunt—with the (hidden or difficult-to-access) central processing unit taking the place of the soul.

Calm: 0
Agility: 4 (represents the agility of creatures inside and the ghost’s ability to act before its victims)
Toughness: n/a (the building material is ordinary, but only destroying it will not destroy the ghost)
Perception: Within the building—n/a, they perceive everything. Outside it they perceive nothing.
Appeal: 0
Cash: 0
Knowledge: 4

Disembodied: The haunt itself cannot be harmed except by an exorcism and destruction of the small vessel where its soul is.

Manipulate Architecture: The ghost can control its building in various ways. The object of these manipulation is always to extract as much fear out of its victim before killing it—
-Open or close any door
-Lock or unlock any door
-See and hear everything in the building
-Sense the fears of anyone in the building
-Add a repeating room behind a closed set of doors
-Create disturbing audible and visual illusions (usually requiring a Calm Check on the victim’s part)
-Double or halve any dimensions of a room
-Telekinetically move any object that is “native” to the house (striking with an Intensity of 4)
-Animate any dead in the house as a Drone (see Revenant/Drone)
-Turn patterned surfaces into 100’ deep pools
The ghost may only enact one of these changes per round. The ghost cannot prevent keys from opening locked doors—though it may close and lock them in the next round.

Weaknesses:
The ghost can sense nothing outside its building.

Beautiful painting. I can feel the book is coming.