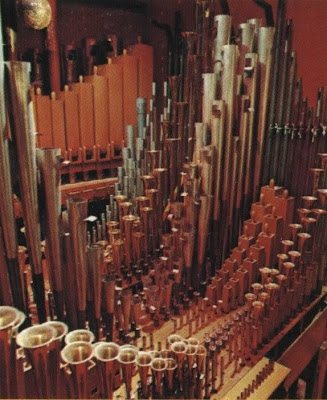 1. Ivory-bearing creatures.
2. Chords and intervals that rend the fabric of reality.
3. A composer named Heward.
4. Sheet music that contains spells.
5. An ancient church.
6. A method of transporting an organ the size of a room.
7. Someone or something Heward feared or hated or wanted that caused the creation of the organ.
8. There's a way to lose a grand organ, which is basically like losing a room.
9. Heward's notes about using sound to breach the barriers between this world and others
10. A paper trail about the location of the organ.
-
-
-
The Hand of Vecna implies... 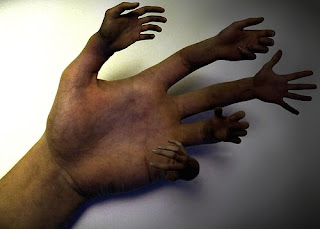 1. An ancient archlich with a now-vanished lich empire.
2. Remains of said empire.
3. The possibility of being both dead and undead, or at least an interface between the two.
4. Allies or worshippers of the lich, Vecna, that keep relics.
5. A reliquary. A monstrance.
6. Rites of Vecna. Taboos and practices specific to the cult of Vecna.
7. A reason that an archlich would bother to have an empire rather than just kill everyone and make them skeletons.
8. Architecture of the Vecna era.
9. Methods of keeping an undead body part "viable" when the rest of the body is gone.
10. (Undead creatures which use this ability? Like evil arms which fall from the ceiling and rip your arm off and replace it and strangle you?)
11. Powerful NPCs who desire the Hand--who may already have it and keep it a secret.
12. Magic gestures which have gone unknown and unperformed for millennia.
-
-
-

Interesting idea- but not one I'd thought of. So if you apply this kind of logic to a game, does it mean that magic items can now pull double duty as plot hooks?

I definitely think they should.

a magic item should be special

HoV 7) Skeletons don't fuck - no fucking, no breeding, no farming. Plus killing people is redundant - all o'them are gonna die sooner than later. Why hurry?

HoV 10) If I was an evil arm which fail from the ceiling I'd try to strangle you directly and call it a day.