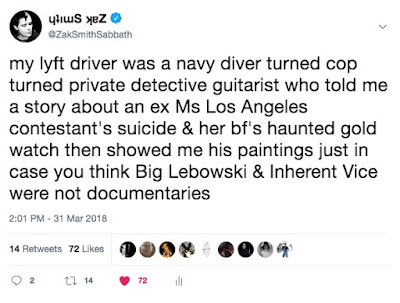 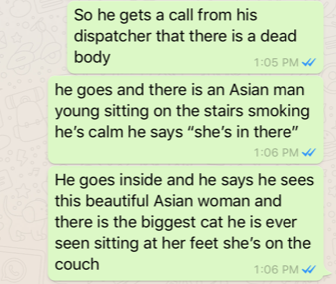 Cat's just sitting there. The boyfriend tells him the girl was a UCLA professor--a former Ms Los Angeles. There are photos of her winning the contest on the walls.  Reincarnation books and crystals everywhere, bullet holes in the ceiling. She's propped up on some pillows, holding a pistol in her hands, her face is almost unhurt... 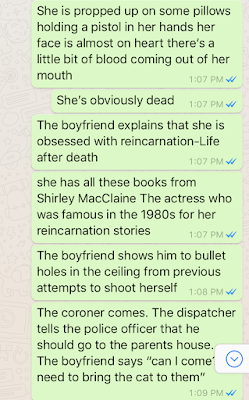 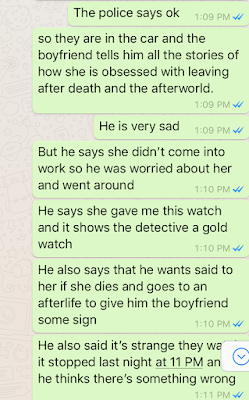 The watch stopped at 11pm. 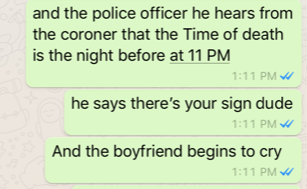 Also, more unbelievable than any of this: his 15-year old son's band does an ELO cover. 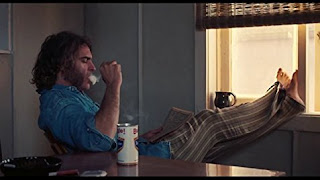 Contacts: 4, including
Trish the dispatcher
Some guy at an insurance company
Son who is in 3 bands, plays 2nd base and does an ELO cover

Guess it depends on the snakes and your relation to them. Are they in a sack, or skin to skin? Big snakes? Lots of little ones? When my son climbs into bed to co-sleep, it's kinda like sleeping with a really big snake. He thrashes around a lot. Thinking back to the hot summers without AC, the idea of sleeping on something that's sucking up heat sounds pleasant. Of course in a fantasy setting sleeping on snakes should be pretty normal, I would imagine.