nice spoon it would be shame if somebody bent it 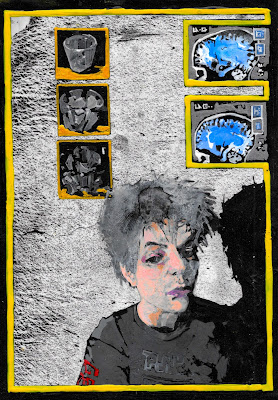 The term “psychic” refers to any otherwise ordinary human who, through mutation, experiment or accident, has developed one or more telepathic or telekinetic abilities.

Although they can be any age or walk of life and can have a wide variety of abilities psychics generally have a few things in common:

-They all have at least a low-level passive Sixth Sense making them supersensitive to danger, hostile emotions and signs of trauma or the supernatural.
-Any use of their abilities causes them to make a Calm Check.
-Consequently they are highly prone to paranoia, PTSD and other forms of mental illness, especially (since this is a horror game) the violent ones.

Typically quite fragile, the psychic is often not the true villain in the story, but may be manipulated by unscrupulous individuals (parents, doctors, criminals etc.) or organizations (cults, treatment centers, pharmaceutical conglomerates, governments, etc). A psychic rarely appears in an adventure without some surrounding scientific or social context, and often this context is as important as the abilities the character possesses. Just as magic implies thousands of years of obscure tradition, psychic abilities nearly always imply some kind of conspiracy to cover-up, control, or cultivate them. Make the surrounding institutions as interesting as you can and the adventure writes itself from there.

Sixth Sense: All psychics are supersensitive to danger, hostile emotions and signs of past trauma or the supernatural.

Psychic Abilities: A psychic usually has one and only one other psychic ability (see Supernatural Abilities later in the Library), but more are possible.

Problem-type player characters may elect to start the game while in the process of discovering psychic abilities.

All PC psychics have Sixth Sense and Precognitive Dreams (see Precognition later in the Library).

In addition, a psychic player may choose their primary ability or leave it up to the dice or Host. If the Host or a throw picks, the Psychic gains an extra +1 to Calm (up to a maximum of 4).

Note that not all psychic abilities are available to PCs. PCs characters may be able to develop additional abilities in the same group—entries marked with a * appear in more than one group—the player must choose which group they will focus on at character creation.

Attempting to gain a new ability happens during downtime. If so, the character must choose to skip any other Downtime benefit that time around (they do not automatically gain a new contact or skill, they do not regain an automatic point of Calm, they do not throw on any of the ordinary Downtime tables, etc. The only exception is if they must make an Addict’s Throw.).  Instead they must concentrate and practice.

They throw a d100 on the following table. A PC psychic can gain a maximum of two extra abilities (other than the ones s/he had at character generation) this way.

Does 'Channeling' cover spiritualism/mediums? Is so then would there be a potential expansion into other powers through the abilities of the spirit(s) contacted?