The annual Ennie votes start today. Who will Contessa's all-wise all-knowing Stacy Dellorfano bestow the plaque and ribbon upon this August before our awesome Ennie-night party? None can say.

But I know where to throw a vote. To find which products are the most innovative and deserving just look for the game designers who are the most conservative and abusive--and do the opposite of what they say. 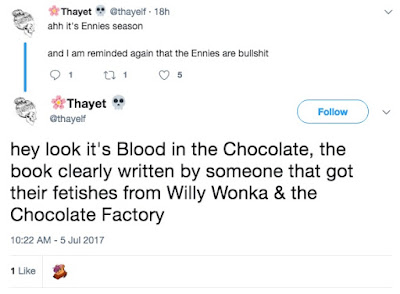 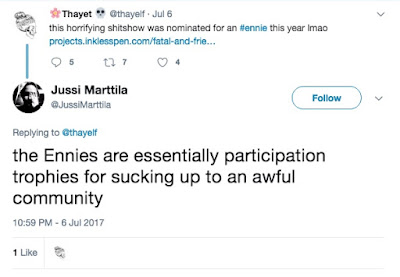 Could they possible be so exercsed about Blood In the Chocolate--a light-hearted, if lethal, body-positive and LGBT-friendly romp by Least Offensive Man In The Western Hemisphere Kiel Chenier? 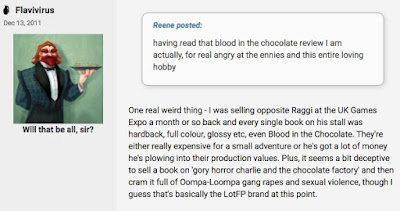 So, that's settled--Vote Blood In The Chocolate for Best Adventure. 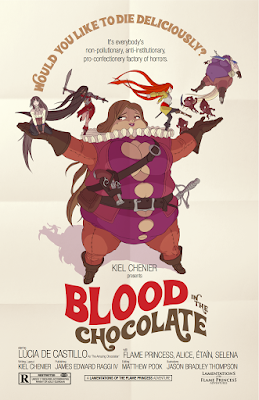 Now, you may be thinking--Zak, I know you don't have anything out this year and that sucks, because not only do we not get to play it, but when you're nominated fun things happen like Cam Banks compares you to Hitler.

Well, fear not! Cam is at it again, this time--he's trying to compare my publisher Lamentations of the Flame Princess to......Donald Trump? 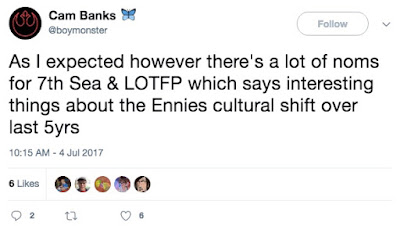 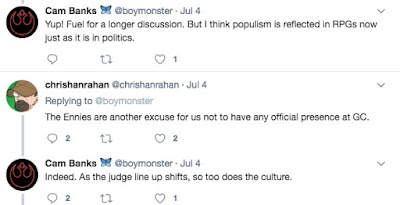 And what about Cam Banks' brothers-in-harassment over at Something Awful?

And the grumps within the OSR...?

The choice here is clear: Vote Lamentations of the Flame Princess For Fan Favorite Publisher.

The Ennies also have a rank-voting system, so you can also give shout-outs to LotFP allies Satyr Press, Hydra Collective, Frog God Games, Goodman Games et al as well as other totally metal DIY RPG goodness like Hubris for Best Electronic Book and Santa Is Dead for best free product.

But you may be wondering--on the LotFP hate-front--Blood In the Chocolate received but one nomination, Cursed Chateau is nominated for Best Cartography and Jeff's Broodmother Sky Fortress got a Judges' Spotlight Award 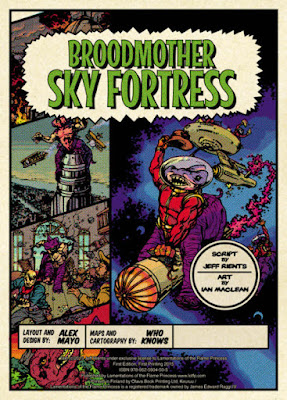 ....but that's just three awards? So what has earned this veritable frenzy of sour grapes and right-wing spite?

Well,
for Best Monster/Adversary
and Best Rules
aaaaand Best Writing
and Product of the Year

...we have Veins of the Earth 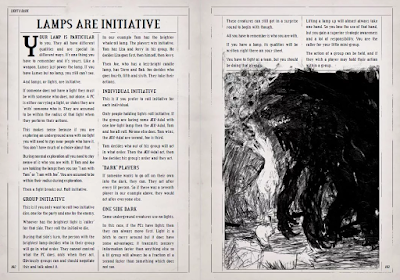 ...by my Maze of the Blue Medusa co-author False Patrick, and hardest working witch in games, Scrap Princess.

So, vote for honor, vote for dignity, vote for quality, vote to disappoint bigoted psychopaths who mope on a hateforum all day thinking of ways to harass LGBT creators (and Patrick)... 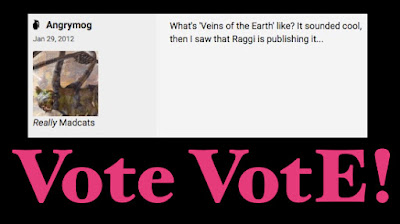 Thinking about this (and need to actually maybe make a long post and start blogging) but it always feels like (as someone who came at games sideways, as an autistic youth learning to play AD&D from her therapist to learn the ideals allegedly solely enshrined in story games, which isn't really a meaningful term anyway, i speak in too many parenthetical statements) the distress over the "populist shift" ignores that games are more diverse *in spite* of an incrowd that expects me to take 3-6 hours to teach someone how to play their pick up and play game to engage in mechanics that are basically "improv theater with some die rolls" that are buggy and poorly defined and unsupported because they're on to their next magnum opus because *some sort of actual diversity is threatening to them*? because what it seems like a lot of the anti-LotFP/Indie D&D/OSR/whatever catchall crowd *actually want* is diversity without an actual diverse set of interests and ideas. Like the weird queerphobic concept that *any* content in a LGBTQAI+ or whatever acronym you like crowd is inherently fetishistic (and Blood in the Chocolate got me buying RPGs again rather than sighing and thumbing through old D&D and playing 5e with a ton of folx who recently got drawn to the hobby and have little interest in storyteller games and a lot of interest in making their own ideas animate on whatever system they can pick up the quickest). Or this weird idea that ~*~diversity~*~ means "basically the ideas we already have but presented by someone that looks different"? like why aren't they doing a critical history of MAR Baker and Empire of the Pedal Throne and the utilization of science fiction in a Vancian sense without reference to European culture? why isn't anyone tracing literary influences on the storyteller genre (why are people upset about the VTM stuff people who seem unaware of vampire novels, like the content of Poppy Z Brite rather than Anne Rice jumps out as *vastly more sexual and less conflicted about being a monster* but they seem to have cribbed their knowledge of vampire lore from a wikipedia page about Bram Stoker and never touched Varney the Vampire or Lost Souls or whatever). Why is the hobby so devoid of critical attention to anything but number crunching in theory fields other than the occasional sociology and the occasional sterling review (a friend and i are trying to put together something on thematic elements that link the two versions of Death Frost Doom and Deep Carbon Observatory while illustrating how author and design differentiate how those themes exist which seems so obvious i keep expecting to see the damn thing already existing). Why are *production values* something to fucking spit at?

P.S. thank you for being great daily reading and for liking my tweet of my estrogen injection with Red & Pleasant Land which probably falls under "insane and creepy fan territory" even if meant as a compliment

Not at all: Red & Pleasant Land is specifically designed to accompany infusions of estrogen.

It sounds like you have a lot to say, Geist, and I look forward to reading more of it in the future

That crowd is all playing telephone and no fact-checking.

They want to hear bad things about osr games and the rest is confirmation bias.

I will say, Tales of the Loop should be recognized for its beauty, despite the fact it is very noncontroversial. It's a fresh and new RPG that I like a lot.

I still voted for Veins at my #1, though. I really want to see what all these people have to say about it; their distortions are entertaining.

Gah, some of those comments...I don't understand what makes people so choked up with spite.

Those are all good picks, Zak, although I am barely familiar with anything else being nominated, so I can't judge. I manage to consume RPG materials by the shovelful and yet somehow I manage to only experience a small corner of the hobby. There's so much content being pumped out there for what I thought was a pretty small market.

james works hard to make nice products and, damn it, that makes me angry. i call it new modern angry boy blues.

I just cleared out a metre of my book shelves and some of it will go for the new wave of Nordic rpgs, and some for LoTFP. I guess LotFP is kinda Nordic as well.

Hopefully nobody shows Thayet the entire canon of global literature.

FM Geist - if you do start blogging, please provide a link because I am interested to read what you have to say.