You're Breaking My Heart

Somebody tweeted that. I love it. I want to do all these things.

I love this language--but then, I'm a painter, I went to art school for like a decade, this is in many ways is my native language.

If the Indie Gamers or Story Gamers or Narrativist Gamers or PostForge or whatever you can call the clique that makes the arty games without offending them have one virtue, it's that they brought this language--a language about creativity and art--to game design.

I am eager for a world where this language is normal in game design circles--and used and taken seriously. 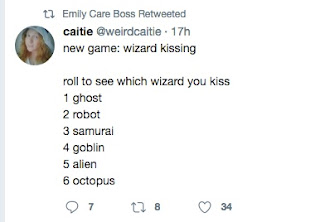 I appreciate the earnestness of the attempt. I am as glad the idea of theory is there as I am glad for the importation of the language of personal expression.

So this is my question for these earnest theorists and dreamers here in this #rpgtheoryjuly, in 2017, on the brink of yet another Ennie Awards night where some tight-as-fuck, eminently playable, megacreative, well-written, carefully-thought-out, lovingly information-designed, beautifully illustrated RPG stuffs from not-them are going up against (yet again) some postForge product written by people who don't play the game they wrote and won't in the future that was drawn lazily by a parrot holding a cintiq and graphic-designed by someone with no game experience or fond-feeling for fellow humans in their heart and with the profits going to line the same old conservative white dad's pockets as usual....

Looking at the promise of this language and the promise of all this theory--does the failure of the postForge game community to live up to any of it ever bother you?

Fifteen years of talking about how games function and yet so many in your scene play other games instead--or don't even roll outside cons?

Fifteen years of theorizing about how much more y'all know about what The People want and how to make the table share a vision and nobody in the postForge seems to have gotten to talk to a decent illustrator? Maybe even one who also likes games?

Fifteen years of talking about games as art yet every other part of tabletop gaming has attracted  a larger proportion of talented writers and talented artists?

Fifteen years of talking about how pumping out tiny bad games will lead to big good ones and the only person who seems to be able to make a design as functional as the rest of gaming is Vincent Baker and maybe Epidiah on a good day?

Fifteen years of talking about making games less sexist and y'all still sit by and watch Contessa do all the heavy lifting?

Fifteen years of talking about incentives and mechanics and you got people who still don't understand what random encounters are for or why combat usually has more rules than talking?

Fifteen years of talking about diversity in games and fucking James Does Not Give A Fuck  Edward Raggi IV is better at hunting down diverse talent than y'all?

Fifteen years of asking for "weird games" and y'all are still stuck at "which movie genre can we imitate this week" while Fire on the Velvet Horizon is shrieking past on your left?

Fifteen years of asking for "uncomfortable games" and yet whenever we do you've produced and supported moral-panic after moral-panic?

Fifteen years of talking about "political games" --and about how alternatives to abusive power structures are encoded in these games and they're radical documents--and yet you have the most abusive, harassing subculture in tabletop?

Fifteen years of asking for "games that people don't like" and you've got a political dynamic where nobody Indie can admit to not liking each others' games?

Fifteen years of saying "make games that speak to you" and...what have they said that genuinely changed anyone's mind about anything?

Does all this talk and so little action ever bother you?

And, even if it doesn't: What is all this chatter for?

Because, honestly: I want to believe. I want to think that a game can have all the things of art inside it, and I want to think we can change how people think with them. I want games to interact with every idea in the philosophical firmament. And you're telling me it can be done.