Things You Can Do With Ram's Dungeon Mad-Libber

So Ram over at Total Party Kill has, in response to me just being like "Somebody should..." just went ahead and made the most useful random adventure widget since the Last Gasp Generators.

What Ram's new thing does is it takes any text you put in and replaces the word or phrase of your choice with random items off a random table of your choice. Now, making your own Abulafia generator already kinda does this, but Ram's generator allows you to do it in a more flexible, off the cuff way--and without making a public page that might step on copyright.

Carcosa is one of the most useful hexcrawls out there--it's also notoriously repetitive--103 Spawn of Shub Niggurath, endless Villages led by Sorcerers or Fighters full of men distinguished only by the color of their mutant skin.

This formulaicness makes it perfect for this example: the ideal text for Ram's Dungeon Mad Libber is repetitive (so the randomiser will have lots of places to ply its trade) and long (so you'll get to see lots of stacked combinations that reveal lots of different ideas)--

1. Paste the base text into the top box.

2. Choose a word to replace with random options (I started with the ubiquitous Spawn of Shub-Niggurath)


Carcosa also has a ton of castles and citadels--another thing you can do is paste in random results with different levels of detail. So basically one result is just "castle" another is "city" but then I also added in a bunch of more complex castles taking from the Dungeon Dozen-the fan index is excellent for this kind of project. 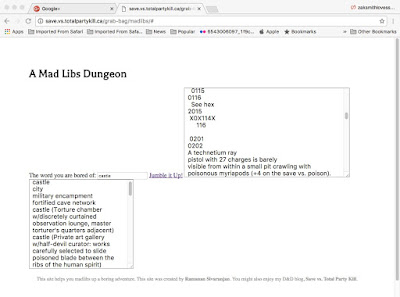 ...and then keep going with all the other repeated words: 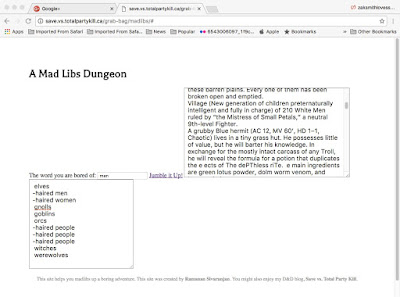 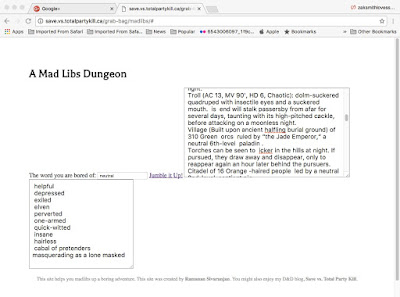 Until soon you have a whole new book to read:

Village (Rampant perversity after nightfall, outsiders welcome) of 240 black-eyed witches  ruled by “the Servant of the Master,” a  quick-witted  6th-level  knight .

3 mutant red-haired women  hide in these hills, cast out by their fellow village (Barley fields must be soaked in sacrificial blood: every crime or misdemeanor carries death penalty)rs. One has bulbous, hypnotic eyes (save vs. paralyze or be stunned for 2–5 rounds), one can spit acid twice per day (2 dice damage), and one is semi- gelatinous (half damage from non-electromagnetic/ ele werewolvestal weapons).  They have no armor and wield crude clubs.  They are desperate and will attack any passersby.

A raiding force of 35 White witches  led by a chaotic 3rd-level sentient pig terrorizes stragglers and small villages (Ubiquitous witchery: hexes and charms fly about willy nilly) in the area.  Their masters rule the lands to the west.
-
-
-
Looking for another long and repetitive text, I seized on the Shady Dragon Inn--an old TSR book that's basically a list of NPCs. Each entry has stats and a short description--by replacing phrases you don't need with stuff from random tables, you can turn these random hirelings into complicated villains or heavy NPCs, hundreds at a time. For example in each description, it says the NPC "wears" something: 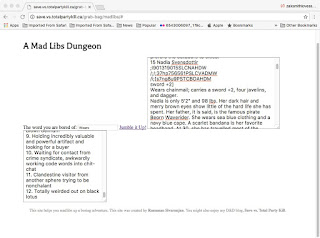 After doing this a few times with key phrases, and using "find and replace" and text mechanic to remove things like all the +2 swords, etc, you get dozens of entries like:

Telepathic and driven by a fear of the dead. Elf. Cleric of Tiamat (Red hand) a sword,  four javelins, and dagger.

Nadia is only 5'2" and 98 lbs. Her dark hair and merry brown eyes show little of the hard life she has spent. Her father, it is said, is the famous pirate Beorn Waverider. She fights for honor and nation: personality nullified by grim nationalistic fervor, demands of rigorous ethical code and extreme stoicisms. A scarlet bandana is her favorite headband. At , she has travelled most of the waters and lands around, and is well- known. She once fought and killed five bandits to protect her boyfriend, who is now dead.

I like how she turns out to be afraid of the ghosts of her pirate father and ex- . That's a whole plot suggesting itself right there.

You can do the same thing with any Monster Manual--take the Treasure Type stat and have the widget replace that with entries from a random treasure table, take a stat you don't care about (Psionics?) and tell the generator to replace that with any kind of detail that interests you, etc.
-
-
-
You can also use the mad-libber to make stuff from scratch. I started with 50 rooms with "Empty", and mixed it up with a list of generic descriptors: 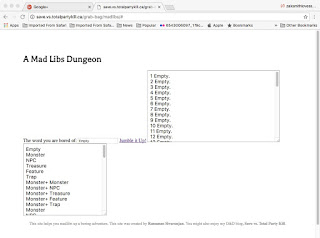 Then once each room had a generic something in it, I went to work pasting in tables to replace each generic thing. Here's all the "treasure"s replaced with random elements from a list of treasures: 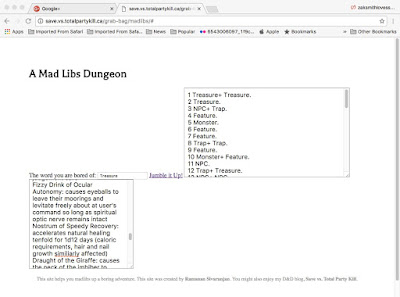 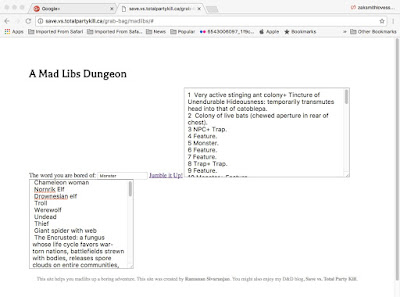 And then read through what you've got and season to taste: