Pit of the Demonweb Queen 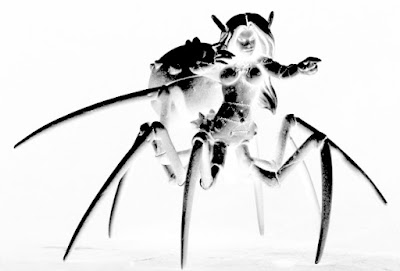 This adventure was created by taking every line of TSR's Queen of the Spiders (which combines the Giant series and the Drow series), rearranging them in reverse alphabetical order using textmechanic and sampling:

Your party crosses the last of the low hillocks
your misfortune

you will need a copy of the statistics of the Slave lords
You will also need the map of the Lonely Inn.
you want to fuel their paranoia
you want the coming events to be surprising!
You should devise the glyphs upon this pillar and select which two are the trigger mechanisms..

you force us to dispose of you personally.
you do not understand

yet vaguely familiar men shadow them.
Yet the trail does not end there
yet I cannot remain silent

with 10th level the norm as the characters leave the surface world and journey into the sunless realms of the depths beneath the earth.
Within this room are two lounge chairs
Within this alcove is a table with a flat chest upon it.
Within the Web
within must save vs.spells or be blinded from a sudden

with several chairs around it and several comfortable couches along the walls.The floor is covered with soft carpeting

with a spider on one face and a female drow on the other
with a small black metal cap which al lows her silver hair to float free.

which is inlaid with ivory
which is in the center of the wall and  feet from the floor
which is covered by snow and ice
which is beyond the range of the spell.
which is almost certain
which is a lie

which are very successful in this land of perpetual night.

which are not too large
which are filled with ornate pieces of art and other objects rescued
which are a mixture of various races
which apparently serve as chairs for the sala manders.

This type of behavior continues for ten years
this town is not named nor is a great amount of detail given.

This sudden increase in activity
This structure is not only Lolths castle; it is also her vessel
This stronghold of the dark elvenfolk is
This stone block is blue and twice as large as the one below it.

This special encounter should occur just as night begins to fall.
This spacious room is littered with broken furnishings
This small place has excellent acoustics

This room would delight the heart of the most avaricious person in the world.
This room quarters two female drow fighters
This room is primarily meant as the place where slaves are rounded up and sent about their tasks under guard.
This room is of faintly glowing purplish green stone
This room is identical in contents to #6
This room is hung with rugs and skins and there are hides on the floor.There is a bed
This room is furnished with a table
This room is foul and odorous

The main ways of this ancient and depraved city are thronged with as unlikely a mixture of creatures as can be imagined.

the guards.
The guards sound the alarm if attacked
the guards arrive in  round.

the drow will never by surprised by the party.

the drow will flee to safety back down the passage from whence they came here
the drow take their positions on the pyramids and cast various protective spells in anticipation of
the drow merchant who knows the secret of this pool usually tosses only 2 gp gems into it.

multilensed eyes can be seen

mottled in various shades and tints of purple and violet.

more horrible as the end of the passage nears.
more disgusting

many different types of bones may be seen jutting from the body.

Lolth uses weapons common to drow
Lolth uses vampires to terrorize lands she is about to invade.
Lolth regularly forces captives into the labyrinth
Lolth rewards

it is your input that makes it a worthwhile adventure.
it is whispered
It is very important to note that while in the Abyss
it is very probable that the thieves will strike from behind and kill in order to completely loot them.
it is up to you to fill in any needed information and to color the whole and bring it to life.
it is so.
it is quite nourishing.

it is of exceptional quality and rarity

In this chapter
In this chamber
in this case
in their attractive female forms
In the Web
In the Vault of the Drow
in the center of which stands an old fountain
In the storage area underneath the stairs which lead to the roof are two ration boxes
in the shade of an old elm
In the secret room are three very heavy iron chests
in the pool of water
in the past.

Ignore the whole thing
ignoring the blending power of the creatures

If the party leaves the area they find the land barren and depopulated.

If an individual tosses gems into the pool

Here dwells the Keeper and his wife.
here at all times

he shouts
he screams for the guard.
he rumbles.
he returns with a round of cheese the size of a wagon wheel.
he releases the spiders
he realizes his mistake and apologizes for the case of mistaken identity

He has one goal to slay the player characters
he has prepared the final act.
he has no regrets.
He has a shield
He has a hoard of ivory tusks

and those who chance to look within see a beautiful female gray elf imprisoned in a bowl filled with water.

and the merchant clans and noble houses employ all sorts of servants and slaves who roam through the black and debauched City of the Drow
and the marble pillars are veined with black webbing.
and the manticores are wild with rage at their captivity.
and the males then fertilize them with milk
and the major sciences of dimension walking

and she will observe them through the slit of the secret door of room
and she will be suspicious of ANY creature entering her current abode.
and she some times assumes this form on her own plane
and she patiently anticipates the delicious moment of confrontation
and she is able to heal herself at will

and if they proceed closer they will observe it is an arena or pool filled with transluscent green water and surrounded bv six tiers of stone benches.

and each branch holds a fat black candle which burns with a flame of leaping lavender and deep glowing purple but never grows smaller.

and anyone in plate mail is unavoidably drawn in.
and any within it must save versus poison at  -3

and by secret entrances in each pool bottom
and

An ancient city carved into the living rock itself

above which are two horizontal rows of circular windows.
above the floor

a wall of tentacles
a walk.
a victim hit must save vs.poison or die.

A giant black widow spider guards these weblike stairs from a position about halfway upon them.
a ghostly plum colored light to human eyes
a gemset orb
A full mile from the entrance to the Vault

a darkness has fallen over that land
a dagger +2 among them
A curious stranger comes up to the player characters and asks them an innocuous question.
a crossbow bolt is fired at one character of the group.
a crennelated battlement pierced with small crosslets.

A city of white goblins

a blackness that threatens to eat the world.
a black stone tower with walls 3 feet thick.

a being created from the joining of many skeletons.
a bed
a bed
a beautifully wrought coffin
-
-
-

All of this is familiar to me except the line "and".- are you sure that's in the module? :-)