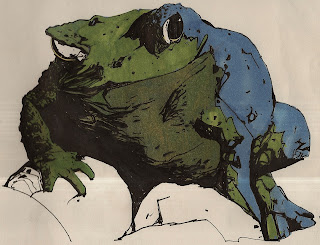 Page 35 of the 5th ed Monster Manual brings us to the bullywug, a boring petting-zoo-people reskinned goblin which should not exist. They should be replaced with the blindheim, from the old Fiend Folio. It's a frog guy and it looks at you and you go blind because they looked so fucked up.

They are a kind of Slaad--the gods of frogs--and come in all sizes and kinds--any sufficiently pious frog or toad (they aren't biologically distinct) can be transformed into a blindheim via acts of consequential service to their kind.

There is one good detail in the 5e bullywug entry. So they hang out with trained frogs, including giant ones--this isn't the good detail, this is a stupid thing that D&D always does but decent fiction writers and films almost never do where they lump together similarly-derived zoomorphic monsters in a way that would appeal to like a toy collector but in practice only ends up diluting the effectiveness of the archetypal images involved--the good part is that they use the giant toads' gullets to carry stuff, including people. I'm gonna have goblins do that. 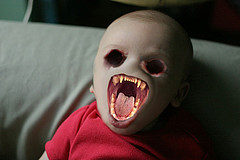 The Cambion in classic demonology is like a changeling baby but with succubusses (which is more fun to say than succubi). Ever since at least the original Monster Manual 2 it has always grown up to be yet another generic horned devilperson that can do things like charm or poke you with a spear.

Their conception is according to at least one source weird:

Cambions are not found as adults--as adults they either become full-on demons or grow into tieflings (so you can have PCs whose "parents" are succubusses which is fun). As an encounter, what you get is a gross child between 1 second and 5 years old--generally a punishment for excessive lustfulness.

It gets heavier the longer it's in one place or in contact with a given creature, and cannot move except of its own volition.

The goes in for the kid-grapple (I would say it charms you into a hug, but I already used that for lava babies)  crawls onto you, begins to bite, and each round grows heavier--the first round it requires a strength save of 18 to stay upright, then 20, then 22 etc. All the while it exerts pressure on the floor equal to an attack with a strength equal to the save--shattering wooden planks, then stone tile, until it begins to be so heavy it will actually pull you into the ground, through all the dungeons of the earth, and down to hell to meet its parents.
-
-
-
-
-
-

Blindheims should have a significant demographic that were formerly Suriname toads, haha.

I always thought the tiny frogmen riding giant frogs was cute. Maybe in actuality the giant frogs are secretly motivated by their lust for ponyplay. Well frogplay in this case.

I liked the 13th Age riff on frogfolk..

what was the gist?

RE: Bullywugs. One of the things that has always been a pet peeve of mine with D&D is that it has all these different humanoids that all seemed to evolve on the same planet. Even tho that bugs me I like having all kinds of weird humanoids for various thematic reasons but I blame their existence on magic. This village started worshiping a frog god so they turned into frog people, that warband was so vicious & cruel they were turned into dog people by the gods etc. Monster Manuals should just have a generic entry for these guys called Mooks or whatever. That should include a list of themed special abilities like; Insect & frog people can begin combat outside of melee range, leap, attack from the apogee & land outside of melee range.

Same planet, different planes of existence (feywild, feydark, plane of shadow) Even Elves are assumed to be Feywild refugees.

13th Age, like your blog, is big on suggesting story-driven possibilities but letting you pick what you want to do. The writeup is in 13th Age Monthly, Temples of the Frog Folk, and includes some suggested rumors to use or ignore as you see fit. Here are a few excerpts:

Inquiries concerning the frogfolk are usually met with brush-offs and more-or-less truthful statements that the frogspawn hardly matter. The even stranger truth is that human, elven, and dwarven scholars more-or-less agree that nothing good has ever come of speaking or writing about the frogspawn. It’s not that the frogspawn themselves are so powerful. But somehow terrible and weird things seem to happen to all the historians, bards, and scribes who have seriously considered the frogfolk in past eras. Those who speak about the frogfolk usually end up dying mysteriously, sometimes in ways that seem related to frogspawn, sometimes not. There’s apparently some great curse at work, but no one claims to understand it. The frogspawn seem like such a minor frayed thread in the world’s great tapestry that none of the great powers seem to have troubled themselves to unravel the mystery.

o Properly prepared, frogspawn skin exudes hallucinatory toxins that promise visions of the future. Drug dealers, servants of dark gods, oracles, and visitors from other realities enslave or skin frogspawn when they can find them. And so the frogspawn try not to be found.

o The gods hate the frogfolk. All the gods, even the meekest and most forgiving of the Gods of Light. The frogs aren’t part of any divine plan—they bubbled in from some alternate dimension, and they’re like a spiritual poison. If one of the frogfolk worships a god, its reverence poisons the deity. The only thing to do is make sure the frogs never find religion.

o Toadstones, gentle reader. Toadstones! The frogfolk hide because whenever they come to the surface, greedy adventurers pry their foreheads open looking for magic gems.

o PCs searching for the source of the frogspawn curse first learn that more than one age has ended when someone succeeded in uncovering the secret. It must be a coincidence.

the parts of that which aren't just ripped from the Skaven in Warhammer seem pretty underdeveloped. so far 13th hasnt blown me away

Yes, that's the rumors section. 13th Age likes to include a lot of competing sketches for different directions to develop the campaign. The rest of that writeup takes a specific approach in detail, but the sketches are there at the start in case you want to take it a different direction. 13th Age is big on emphasizing GM empowerment, to the point of including notes from the authors where they discuss their disagreements about approach, to help the GM think about alternatives.

Thanks for the pointer to the Skaven in Warhammer. I look forward to reading about them.