(shockingly, not about basketball) 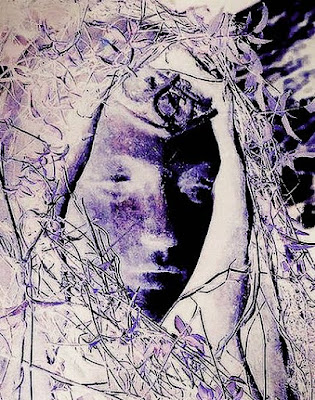 Me and Patrick are working on some kind of Anti-Camelot project...
Part One
Part Two
Part Three:

Humans say there is no law in the Half-Court of the Half-King where the half-elves thrive, but there is--and it is that everything must happen sometimes.

Crimes must be punished half the time--but half the time they must not. Treaties must be half-honored, women half-respected, children half-raised, dangerous magic half-banned. The genetic chimeras prowl the half-sown fields and swim the hot and then cold again waves. 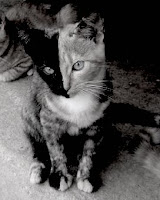 The passionate and unreliable King Thanacharis would call himself True Neutral--but this in no way suggests the abstractedness of the modron, serene remove of the druid, or the selfishness of those who give no fucks. His knights come on hybrid horses to fuck your mom and send her roses, then eat her whole and buy you shoes. Their net goal is to cancel themselves out, like youtube comments. Wildly that and then wildly this--seeking zero, signifying nothing.

Any half-elf is welcome in the half-land. Half choose to live in that half-enlightened land of half-seelie and half-unseelie laws, and half prefer to remain diasporic, welcomed widely, but home nowhere.

They are trouble half the time--which is a lot if you think about it. 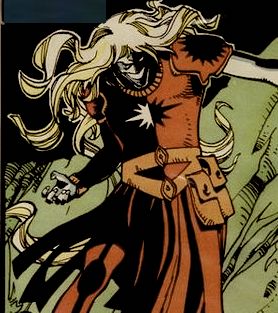 Strange Characteristics of the Half-Knights
Roll d100 until the knight's characteristics cover overlapping domains (14 and 15 for example, or 3 and 90, or 9 and 11) or the knight becomes too complicated to keep track of

30, S:3  D:3 Cn:3 I:18 W:18 Ch:18
31, Every other word is elvish the other half are common
32, Takes two steps forward, two back, never gets anywhere
33, Smites as a standard paladin one round, as an oathbreaker the next
34, Aura of healing one round, damage the next
35, Immune to magic and magic weapons one round, immune to ordinary weapons the next
36, Blessing aura one round, Curse aura the next
37, Aura of healing on the left, aura of damage on the right
38, Immune to magic and magic weapons on the left, immune to ordinary weapons from the right
39, Blessing aura on the left, Curse aura on the right
40, Blind on one round, x-ray & dark vision the next
41, Invisible by day, Faerie Fire'd at night
42, Silence aura one round, causes painful din the next
43, Smells corrupt and then sweet
44, Always accompanied by twin (roll again, characteristics divided between them)
45, Conjoined twin (roll again, characteristics divided between them)
46, Halfling sized on Wednesday night, Thursday, Friday, and Saturday, 12' tall otherwise
47, Follows opposing gods on alternate days
48, Prudish at night, lascivious by day
49, Aquatic by day, air-breather at night
50, Prudish by day, lascivious at night
51, Air-breather by day, aquatic by night
52, Paralyzed on the right side
53, Deformed on the right side
54, Darkness aura one round, blinding light the next
55, Always honest for 5 minutes, then always dishonest the next 5
56, Reckless one round, prudent the next
57, Follows the etiquette of a knight for 5 minutes, then the etiquette of a lady for 5
58, Paired knight and squire--they switch roles every minute
59, Elf on the left, human right
60, Elf left, orc right
61, Always wins initiative, then always loses the next round
62, Veteran (+10 to hit) one round, novice the next
63, Attacks then flees, then attacks, then flees
64, Ugly and then beautiful on alternate rounds
65, Spreads disease one hour, healing aura the next
66, Heat aura left, cold aura right
67, Manic depressive
68, In front of you one round, behind you the next
69, Always inside at night, always outside by day
70, Outside by night, inside by day
71, Invulnerable from the front
72, Invulnerable from the back
73, New armor on the left, ancient and worn armor on the right
74, A wealthy lord for one minute, a beggar for the next
75, Harnishly realistic for one minute, a terrifying enchanted fey creature the next
76, Sleeps for five minutes, awake for five
77, Dual wields: one sword normal, the other held in "icepick" grip
78, Only attacks creatures on the right side
79, Only attacks creatures on the left
80, Alive for 2 rounds, dead for 2
81, Sick for one round, causes sickness the next
82, Blind for one round, causes blindness the next
83, Dead for one minute, death aura the next
84, Drunk for one round, causes drunkenness the next
85, Transposes positions with foe every round
86, Swaps weapons with foe every round
87, Swaps abilities with foe every round
88, Swaps hit point totals with foe every round
89, Swaps goals with foe every round
90, Only takes half damage
91, Deals half damage on one round, then double damage the next
92, Left half undead
93, Left half stone
94, Left half glass
95, Left half glass, right half stone
96, Left half magma
97, Left half ice
98, Left half magma, right half ice
99, Only appears for five minutes at dawn and dusk
100, Left half unarmored body, right half empty armor

In large battles, legions are formed of knights aberrant all possessing the same characteristic and paired with another.

Although the Half-King may or may not, GMs may wish to pair individual half-knight antagonists with partners with half-knights with complimentary vulnerabilities to present more of a challenge.
-
-
-

In all seriousness, this is fantastic. Think it might get very chaotic with multiple of these in play simultaneously.

Made a half-creature as follows;

A knight who wields blunted cutlery and fears nothing, screaming challenges and insults and rushing the guy with the biggest weapon... has your weapon when in front of you, trying to murder you with your own stuff, yet then appears behind you, back to back, perfectly silent like a shadow waiting for her next opportunity - while you wield two blunted sporks and hopefully don't spot her.

So is all this stuff floating around the fairies/green and pleasant land part of the world map, zak?

You are banned here because you didn't finish the last fight you started. Go back and address it if you want to be allowed to comment: