On Spidergoat Economics (or Weird Scarcity) 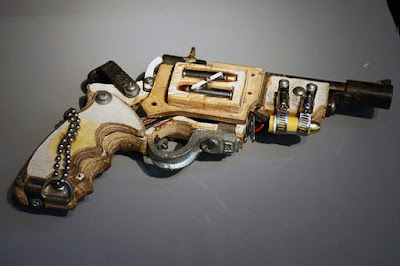 Spidergoat Economics is a phrase Jeff Rients coined for something that has been around in games for ages: the idea that due to prevailing setting or personal conditions, your character must make do with gear that is not only suboptimal, but eccentrically so. This may be true for the whole game--and may determine in-game goals.

We could call it simply Weird Scarcity--but Jeff introduced me to the concept with his Mutant Future equipment tables and I never looked back, so I'm letting him name it.

Spidergoat Economics isn't really just about gear--it's about how advancement and abilities are tied to developments in game (ie, finding "treasure" or looting dead enemies) rather than players designing and then getting to play the exact character with the exact katana they imagine in their head. It is not a player empowerment device-it is the other thing: It empowers either the GM or the dice to set up gear itself as a challenging starting condition with which the challenge-oriented player must contend. It is not escapist.

Most games do not give themselves over completely to Spidergoat Economics and are mostly a hybrid of the reliable and the Spidergoat.

In the old D&D systems where your spells are acquired randomly ("Chance to know each spell") and so you have to kill a boss monster with Mending, spells are Spidergoat. They are even more Spidergoat if they have horrible downsides or inconvenient durations, areas of effect, etc.

Jeff designed a whole starfleet battle game around Spidergoat Economics--you have to win although each of your ships sucks in a certain way.

Originally (and in most OSR and DIY D&D games) magic items are distributed according to Spidergoat Economics. You can't just buy them, so you do what you can with your +2 Longsword of Volcanic Activity rather than just buying a +5 sword off the rack.

My D&D starting equipment list here is a very lite version of Spidergoat Economics--it's all normal equiment, but it isn't presumed that your character can just start session 1 with exactly what they want. In terms of armor and standard weapons, it ceases to be Spidergoat as soon as the players get to a big city.

On the other hand, my TMNT/Mutant Future Cannonball Run Post-Apoc Restaurant Reviewer game was 100% Spidergoat Economics as the character sheet shows.

Scrap Princess looked at my Shadowrun post from yesterday and provided one of the most divine examples of Spidergoat Economics yet--imagining a world of cyberpunk magic where nothing works the way you think it does because you're just a scrabbling schmuck between weird juggernauts.

"Hi-tech = reliable is a fucking techo-utopian scam . That gun with the target seeking bullets needs a wi-fi connection and the latest app download or it ain't doing shit. And if it gets knock around you sure ain't fixing it because it's planned obsolesces in the hyper markets of super capitalism chummer . Also see guns that you don't legally own but just pay a monthly licence fee for and it keeps trying to sell you micro-transactions."

...and gives lots of reasons the setting could and should be de-rationalized to explain how you ended up with such weird tech. Don't forget to read the comments!

Like all economic systems, Spidergoat Economics has implications that reach far beyond what you buy and how. It is related to randomness and to the rationing of options, and a game style devised around finding clever ways to play the hand you're dealt: Noisms recent post about how Shadowrunners could be victims of not just The New but The Weird New extends thoughts along the same tracks.

Spidergoat equipment systems are, ironically, very newbie-friendly as you never have to go "Here's a list of a jillion things, what do you want brand new person?" there are no trap options because everything is a trap. You don't buy stuff, you are assigned stuff and then decide who to target to get more stuff.

5e D&D as written--where you have enough to buy whatever armor you like and can get an "adventurer's pack" is not Spidergoat (thought the d100 chart of trinkets is kind a feint in that direction--and lovely, we at DIY D&D get what you were going for with that, whoever wrote it).

The assumption in 3.5 and 4e that you would just eventually buy magic items is very ungoat, cabron.

Post-scarcity futures are obviously not Spidergoat. (But post-post-scarcity is: this power armor was designed to work in a world of infinite solar energy but you crashed near a dying dwarf so you can use it for 3 rounds a day...)

Superhero character gen is mostly not Spidergoat as the challenge of making a coherent character out of collaged elements often results in PCs too silly to play in a genre where suspension-of-disbelief is already pretty high. These games need design and players need mostly to get what they want or it won't hold together as a character--though figuring out what parts of a hero pc you could goatify (personality flaws, npc support system, interparty relationships) is an interesting challenge. Maybe Wolverine spent so many points on badass he had nothing left over for Height or Working Well With Others.

Abstractness is fundamentally un-Spidergoat: the kinds of games or subsystems where you get a pool of points and spend them to create a thing of xxxx level effectiveness and you flavor it to taste (ie "You can call it whatever you want as long as it does 3d6 damage").

Apocalypse World is an interesting case: The setting elements describe a Spidergoat Economics scavenged and kit-bashed future but the system distributes these things in a way that sometimes allows for the players themselves to design them, which makes the character have to undergo Weird Scarcity, but the player gets, in practice, a gun that works like other guns. Usually. So like: the setting is pretty Spidergoat but the system is less so. The setting describes a scarcity the player does not have to tactically account for.

-Yes, you have the fastest ship in the galaxy but...your hyperdrive doesn't always work and it maybe isn't yours?

-RIFTS is solved instantly with Spidergoat Economics. Nice Glitter Boy armor there. Shame if the coolant tank got a leak... Reflex missiles huh? I think I saw one of those 3 years ago in a church full of mutant bats.

-Voyager is essentially Spidergoat Star Trek. Even the fucking crew is scavenged.

Zak, you are my damn hero, to the point that I think I have a nerd man crush on you. You are creative and I get a dozen ideas every time you post. Holy crap, stay weird vampiric butterfly!

Some players or DMs may not even get the concept of imagining something beyond the equipment list. I was playing in a D&D 5 adventure league game with I DM I didn't know. I wanted my character to soak a blanket in oil, throw it on something, and set it on fire. He seemed flabbergasted that I would try anything but step up and swing a sword.
Maybe someone will read this post and it will expand their imagination.

I wonder if the Spidergoat version of superheroes is something along the lines of GRR Martin's Wild Cards. Your right that a collage of odd things might not work for a character, but maybe some sort of random power/mutation generator would work for NPCs in that setting.

Sure there are ways to do it
(also Days of Future Past and stuff has Spidergoat elements) but the platonic form of the superhero genre pulls in another direction.

You could make an argument that Mayfair's Underground, wherein every superpower comes with the risk of a mental disorder, could serve as an example of a superhero RPG with spidergoat economics.

This is a really good way of describing something that's actually really important.

Last week I started a new game with a bunch of players who were new to D&D, so I started off at the most basic level possible, with the old 'You're all thrown into the dungeon with nothing but some torches and a knife' routine. To my absolute delight they immediately started scavenging equipment out of their environment: improvising shields out of the heads of giant mushrooms, pulling the spear out of the spear trap that just killed their buddy and keeping it as a weapon, scavenging goblin bows even though the strings snap when you pull on them too hard, and so on. It really pushes players to engage with the environment *as an environment*, rather than just as a kind of green-screen backdrop for their 'heroic' exploits...

Is it Spidergoat if you design a thing with a build in flaw?

Like if a player creates their own starship, but indicates the improved sensors make the maneuvering thrusters go wonky when they're in use.

I like some of the effects here, but I am a design, and abstraction guy.

ICONS does a spidergoat supers system where you roll up your powers and origin then have to explain your super science character who has launchable cactus spike skin and can make force bubbles.

Also, Stuperpowers! there was an old spidergoat supers game which is basically like the movie Mystery Men or the group called Section 8 in the comic series Hitman.

Paranoia is definitely spidergoat economics... ever been to R&D? And technically you don't own that jump suit or laser pistol...

Is it Spidergoat if you design a thing with a build in flaw?

Like if a player creates their own starship, but indicates the improved sensors make the maneuvering thrusters go wonky when they're in use.

I like some of the effects here, but I am a design, and abstraction guy.

Great pic! Thanks for introducing me to the work of spidergoat maestro Tom Sachs.

It isn't unless the flaw (or a flaw) was compelled by forces external to the player. That's like the Apocalypse World example otherwise--you're simply enabling the player to cosmetically describe Spidergoat aesthetics, but not challenging them to deal with a problem.

That's just writing/GMing/authorship, not problem-solving, which requires dealing with shit thrown at you by external forces.

Yeah that sounds goofy and terrible

It isn't unless the flaw (or a flaw) was compelled by forces external to the player. That's like the Apocalypse World example otherwise--you're simply enabling the player to cosmetically describe Spidergoat aesthetics, but not challenging them to deal with a problem.

That's just writing/GMing/authorship, not problem-solving, which requires dealing with shit thrown at you by external forces.

I used to work for him

In what sense? Did you work with him in the studio? Crazy coincidence either way, fan of both Sachs and you.

i answered the phones etc--though he did have studio assistants

You might qualify for a new solar energy program.
Click here and find out if you qualify now!

Thanks for giving me a name for my favourite style of 'getting loot'! In particular that link to Scrap Princess' sr post is something I'll definitely take up next time our crew picks up sr.