They were defeated when attempting to prevent a bank robbery by the gang of mutant terrorists known as The Electric Gang but rescued by members of The Frightful, who battled the rebels to a standstill.

(The target numbers are if you're playing where you just roll 3d20 instead of using the Marvel Superheroes chart. 1 success=Green, 2=Yellow, 3=Red.) 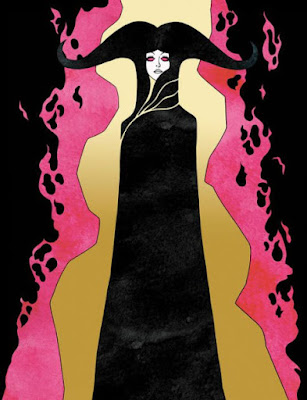 POWERS
Sorcery--Amazing. Mostly transmutation and curses. There's always a way to break the curse, she'll brag about it.

POWERS
Twisting space--you can't escape from him or where he is without an In (40) Reason FEAT and an Ex (20) Agility Feat. He can drop people into these spaces if they're grappled. Anything that distorts his body distorts the space round him--make an Agility FEAT to avoid it.
-
-
-

i just do what google translate tells me

BTW, I love your 3d20 vs target translation of FASERIP. I'm still tempted to do a statistical analysis of it for a blog post that compares these to "traditional" probabilities, but I will say that this is a great way to keep "looking at charts" from getting in the way of game play.

It's "Die Hexe", "Das Eisen", a compound would be "Die Eisenhexe" in German.