The Art of Europe in the Piratey Era

Part seven in a series on D&Dable art
Everybody wore lace and a fancy sword, it was a strange time on a strange continent…

Once anatomy and perspective got going in the Renaissance, Europeans spent the next 400 years treating their newfound ability to make shit look really real like a kid treats a toy on Christmas--or how people are treating photoshop right now.

Oh hey, we can show someone's head getting chopped off:...
Or I can paint my hot wife's disturbing eyes...
…or show you freaks looking at a rhino!...
…or explain what an iceberg looks like...

So, basically, if somebody in Europe saw it or even just imagined it between 1500 and 1900 there's a painting of it. The range of subjects is unprecedented, even if the range of techniques isn't.

When we look at most modern fantasy illustration and concept design--this is where their bag of tricks came from. Even video games and movies still rely heavily on what this era of painting showed about the variety of different effects you can get just by the changing the light sources or palette.

European art after the Renaissance and before modernism is usually divided up by historians into a series of minutely examined and sequenced -isms. But to the modern viewer (and, likely, from the POV of any pre-20th century non-western culture) these categories seem less like a progression of changing styles than an attempt to fix names on loosely affiliated fashions that swelled, subsided, and mixed within what was essentially a massive tide of overlapping realisms.

The main ones, in the order they appear, are…

Mannerism: the one where everybody is skinny

Realism: the one with a lot of grey.
Minor 19th century movements of special interest to RPG folks include the Orientalists, who painted scenes from the far and middle east...
...and the pre-Raphaelites…

...who spent a great deal of the 19th century painting things from an idealized Middle Ages. They're spiritual ancestors of Tolkien and a lot of the high-fantasy artists and high-fantasy ideas still around today.

If we imagine every bad artist as a kind of failed experiment in an ongoing attempt to manipulate the bloodlines to create a good artist, people like Waterhouse, Burne-Jones and Gerome (whose paintings--from what I've seen--completely fall apart up close) were necessary to produce like Jeffrey Catherine Jones and Frank Frazetta.
As usual, the typical art historian's Bugbear of Relevance rolls right over what's most interesting about the best work from this era which is: it's just really fucking good.

For example, everything below gets called baroque, despite theatricality, drama and action not really being the point…
(The idea of an egomaniacal Cardinal who has all these conflicting portraits is a good idea for an NPC.). 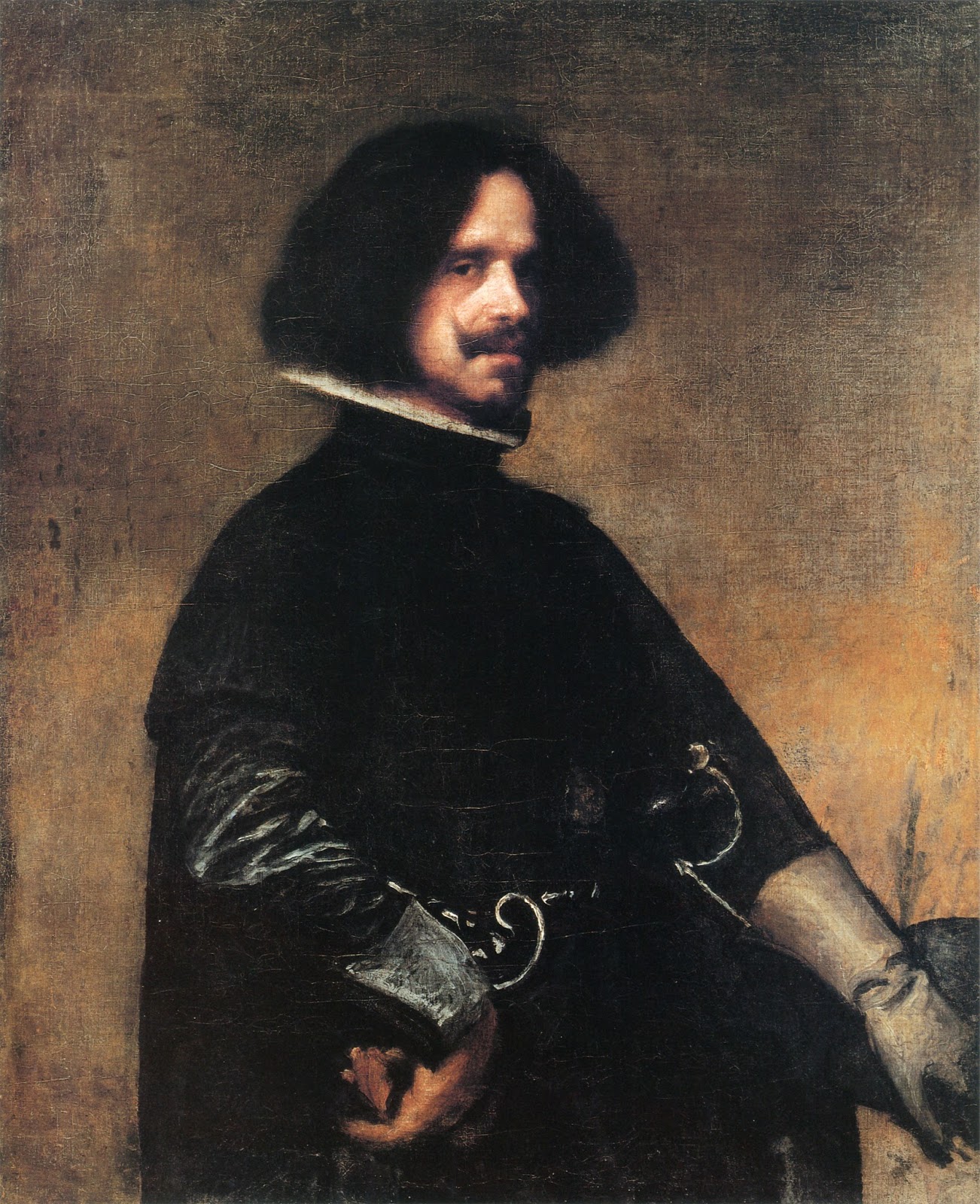 Basically: There were a lot of people painting and sculpting, a few were good and most of their names are familiar.

What art history pretty much completely fails to mention are the prints and the printmakers. The three (otherwise wonderful) big fat survey books I've been relying on to refresh my memory about who did what when for the spine of this series pretty much skip printmaking entirely.

Prints are small and not usually in color and, unlike oil paintings, you can't keep them out in museums for long or they'll fall apart. They represent a parallel but not visually equivalent tradition to what's going on in the rest of Europe in Piratey Times yet even in today's art schools the printmaking department is like pretty much where anyone giving a fuck about you goes to die.

Part of the problem is also down to the original art history villain--Vasari. Printmaking was, in the beginning, predominantly a northern art (Durer, Schongauer) and so Vasari was like fuck that whole medium let's talk about Giotto some more, amirite?


In the split you can hear echoes of the crowd-pleasing but gormless bulbous soft-focus warm Italian Renaissance painter/ vs sharp-eyed but uncharismatic joyless angular Northern Renaissance printmaker split today when people discuss digital painting vs black-and-white post-Sutherland RPG art (and lurking beneath that, is an echo of arguments about painting--free, open, colorful, vague--vs illustration--dutiful, precise, detailed. With anything truly great conforming, of course, to neither stereotype.)


The nice thing about the huge archive of old master prints from a gamer point of view is they really do contain a record of every freakshow kind of picture imaginable. What with all these museums digitizing their archives, it's a fucking endless rabbit hole:

I love this series, man.

I've just started drawing myself, and this is like... Saving me doing a lot of research on my own. Or at least kickstarting it. Very inspiring. Totally gameable.

Yeah, I am really enjoying this as well.
I have always been a fan of the Pre-Raphaelite Brotherhood. Their art sure, but also their poetry.

Some of the folksier prints even have that not-quite-skilled-but-hella-enthusiastic flair you find in amateur RPG art. Broadsides, early newspaper-like things and chapbooks are full of them. The genre has its own masters from Lucas Cranach Sr. (a bit early for this post, but his werewolf is to die for - http://upload.wikimedia.org/wikipedia/commons/6/6a/Werwolf.png ) to Doré, but there is also genuine charm on the lower rungs of commercial illustration. My picaresque RPG, Helvéczia is to a great extent a love letter to this kind of art - and the cheap, lurid early pulp literature it was often used for.

I want to try and understand more fully, so... are you saying that Edward Burne-Jones obviously pasted people in from his life-drawing class and it was bad? then, later FF did something similar, but had the craft to make a composition appear to be more than the sum of its parts, and it was good? again, I just want to keep up, not trying to argue.

The day I learn to draw a usable dungeon map that feels like Piranesi's prison I will be ... really happy. ;)

I like El Greco. Several reproductions of some of his paintings used to hang in a local Mexican food restaurant here in Pueblo, CO. Whenever I see El Greco, I get hungry for Mexican food.

What?
Quote the part of the text that has to do with what you wrote there.

Loving this series. I also really like the prints. The line based aesthetics of prints have always appealed to me. You mention digitized print archives where might they be found?

There's that painting of the Christ on the Cross with his arms way out of proportion - it was one of several pieces we looked in an animation class as an example of how to use unrealistic contortions (in this case, stretching) to convey something. In animation that's normally movement, but in the painting it's suffering.

The Callot print with the mannikin makes me want to think of a way for gnomes not to suck.

This recent series of yours fills in a number of gaps from my own art school days, plodding through Art History hoping to get to interesting artists and art that we never quite seemed to have time to address.

I did much research on my own, but since I've always been more fascinated and inspired by illustrators over painters, I never looked into some of these names quite so deeply.

Thank you for this. Quite fascinating.

Can't wait til you get to Dadaism!

Thanks for this. I'll definitely look at these as a source for my blog.

I'm still surprised that this stuff doesn't get used in RPG products.

My wife just said, "That lobster is so good it makes me want to eat lobster. And I just ate lobster a week ago!"

I'm also surprised art like this doesn't get used to make miniatures. The only guys I know doing so are the fucking champs at Lead Adventure:
http://www.lead-adventure.com/index.php?cPath=22

"imagine every bad artist as a kind of failed experiment in an ongoing attempt to manipulate the bloodlines to create a good artist... Burne-Jones... (...painting--completely fall apart up close) ...necessary to produce ... Frank Frazetta." Now, all I understand from that is a possible reference to Dune. Then I look at the DOOM painting. I am not trained in the visual arts. I ask myself what is wrong with it. it seems odd. it seems to me like it is in a box-- like he observed rectangular borders -- much more so than other artists. And that's not all, something else is odd about it that I can't put into words. Then I ask myself, is this unworthy? Smith seems to be saying so, or maybe I am confused about the text or the painting. So I look some more, the woman seems to be cut from somewhere and pasted into this image, she doesn't even seem to be connected to the perch that seems to be designed as her space. Then I asked myself, is that the connection? Was FF influenced by this but also see what was wrong with it? Did FF cut and paste too, but in such a way that resulted in worthy and popular art? Is that one idea that being presented?

I am not sure so I tried to ask you about it. It seems like I have failed as well as wasted people's time. I don't want to be a time-waster. I am not trying to be deliberately obtuse. I do know that when someone asks a question that reveals their own complete ignorance that there is not really an optimal way to respond. thanks for trying, though.

When I say a painting "falls apart" here's what I mean:

Like zoom in all the way to the upper left here:
http://upload.wikimedia.org/wikipedia/commons/b/bd/John_William_Waterhouse_-_Undine.JPG

the tree suddenly looks like shit. Compare to the face in this Velasquez:

The key word there being "usable." Love his stuff, but once you start trying to explain it to the players without visual aids... >.<

Thanks for the link, noted, and agreed. Though I'm a bit surprised you give Frazetta so much of a pass on his everything-fades-into-mud-and-mist backgrounds. I think they're awesome and give his work a really dreamlike quality (some details are clear and perfect, other things seem amorphous and unreal just like in real dreams) and I get something of the same effect from Waterhouse, though in my (extremely limited) experience even his best bits still want you standing a good dozen feet away or so for optimal enjoyment.

His backgrounds never bothered me. What matters isn't how much is there but that what's there is exquisitely done:
http://3.bp.blogspot.com/_dafC2AFf3uo/S-ms2OzjG2I/AAAAAAAABo4/QNtsCMV3FG8/s1600/frazetta.jpg