Eight Persimmons Beneath A Severed Arm

This is 8th in a series on D&Dables in art history
The general Western ignorance about far eastern art is chosen: the records of who painted what, when, and why they said they painted it and what people thought about it are extensive and go back a very long time. In eras where Europe was producing pictures attributed to like "Master of Echternach(?)" China had painters with actual names and life dates and scholars producing extensive bodies of theory about them. So we can't fault their book-keeping for our cluelessness.

Part of the problem is your average modern viewer looks at, say, this...
...and then this…

…and hears that they are separated by five or six hundred years--most of which were spent arguing about painting--and they're baffled.

These paintings seem to eschew so many of the gimmicks Western art (not to mention nearly all the other kinds of images we see every day) rely on--color, action, directness, showy displays of technical knowhow, theatricality, anatomical illusionism, ornamentation--and not even because the artists lacked the time, resources, or technology, but just because they felt like it. They felt like it for 3000 years.
One thing discussions of East Asian art fail to clear up is that the audiences for these works of art were no less enamored of shiny colors or the illusion of action or any of the other vulgar chicaneries the artists of a sophisticated and technologically advancing civilization will inevitably experiment with than anybody else. They just got their fix elsewhere.


The homes and temples of the Song, Yuan, Ming and Qing rulers were, like those of the Medicis and Popes, filled with awesome fancy junk. China, in fact, mastered awesome fancy junk (full of, yeah, color, action, directness, showy displays of technical knowhow, theatricality, anatomical illusionism, ornamentation) faster than almost anyone else. 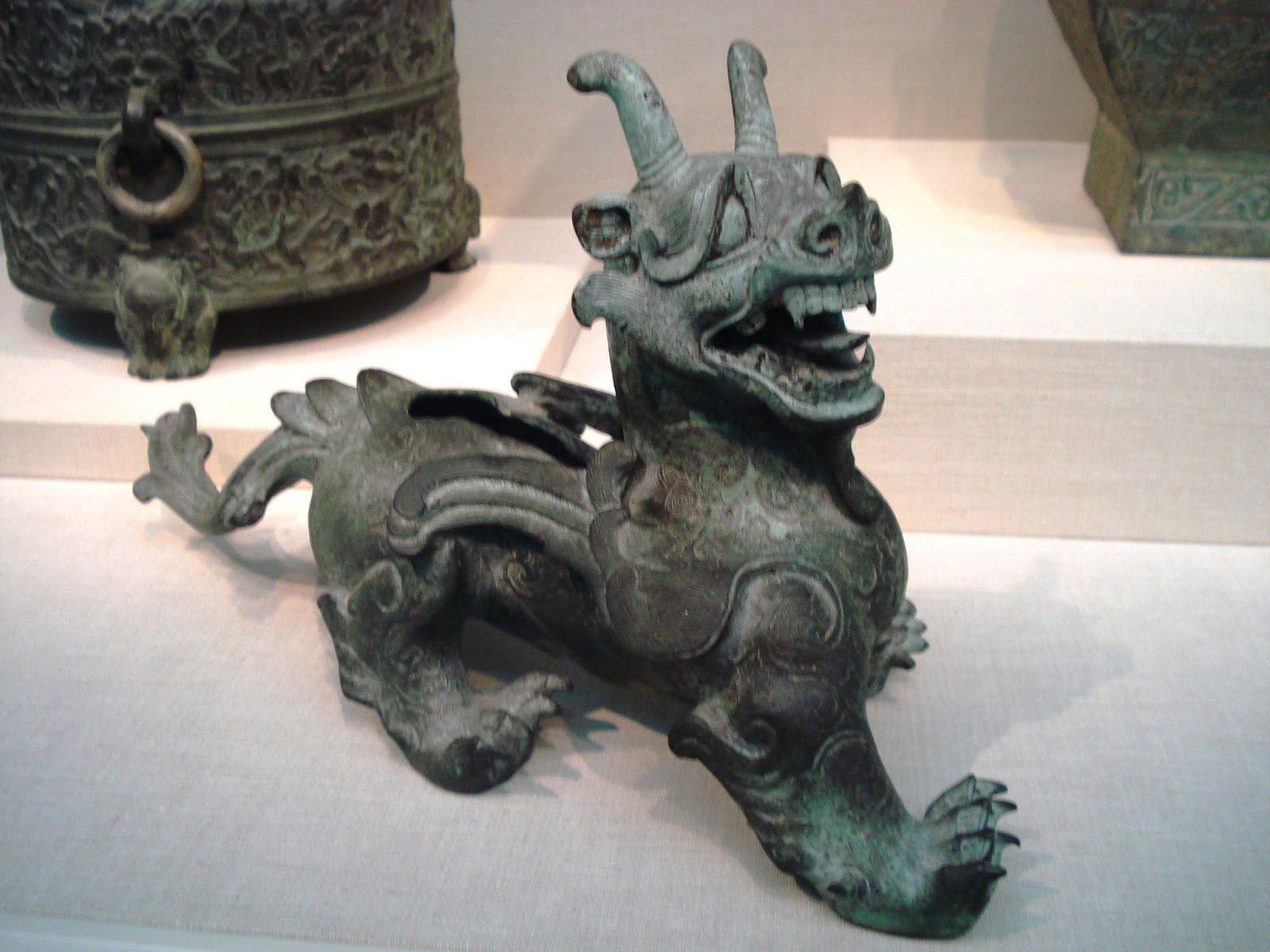 Palatial homes in the West were ostentatious with architecture, furniture, jewels, costumes and exotic fabrics and the paintings that adorned them evolved to be focal points of that ostentation--to show a sort of concentrated essence of all that color and craftsmanship.

The Eastern palaces were equally magnificent, but the scroll paintings were conceived as a contemplative rest amid the silk and splendor, not a climax of it.

You turn the corner, you see the scroll, you lean in, you follow the movements, you are taken far from the calculated and crafted world where the scroll hangs, into not just nature, but nature as seen by another. The brushstroke is an island of human touch hanging on the wall of an otherwise seamless, symmetrical, dyed, gilded, lacquered and manufactured world.
The Western painter's work is of a piece with the work of the Western sculptor, artisan or jeweler--it is a built thing. You can see the arts and crafts develop in tandem in Europe and to the same ends. The Eastern painter's work stands as an emblem of individual human vision and fragility in contrast to built things.

It keeps what the person has seen and how they saw it from being lost--like tears in rain, as the guy said. Western painting--oh hold on I have to grind up some bones to make yellow--is a much too indirect art for sketching impressions, at least before it found out about Eastern painting.

Painting existed in a para-literary space rather than the decorative, sculptural or architectural one that Western art chose to compete with. Kurt Vonnegut likened the mind-clearing effect of coming home from work and reading a short story to a "Buddhist cat-nap". The ink painting tradition isn't too far from this idea: The artist takes you--(using a distinctive and personal hand) away and you read the painting as much as look at it--then you return to the world.

Unlike a typical western painting--and much like a story waiting quietly in a book--they don't grab your attention. Grabbing would require intruding on the room, the paintings do not look back at you. They wait for you to look into them, and then hold it as long as you're willing to engage them.


Japan, despite relying on the same bag of technical tricks, displayed a consistent inability to quite get with this program. The seeds of the vivacious and frenzied visual culture Japan has today are visible early on.

While those Chinese monkeys up there have the good sense to repose for the unknown painter in both the loquat tree and the composition it and they both serve, these Japanese monkeys insist on fucking around. The way they hang almost satirizes the way the scroll hangs from the wall.
And this guy? He's looking right at you. Totally not a chinese monkey thing to do:

Now part of it is the influence of Japanese Zen and the emphasis on spontaneity--here's Sesshu in 14something…Landscape Splashed With Ink: 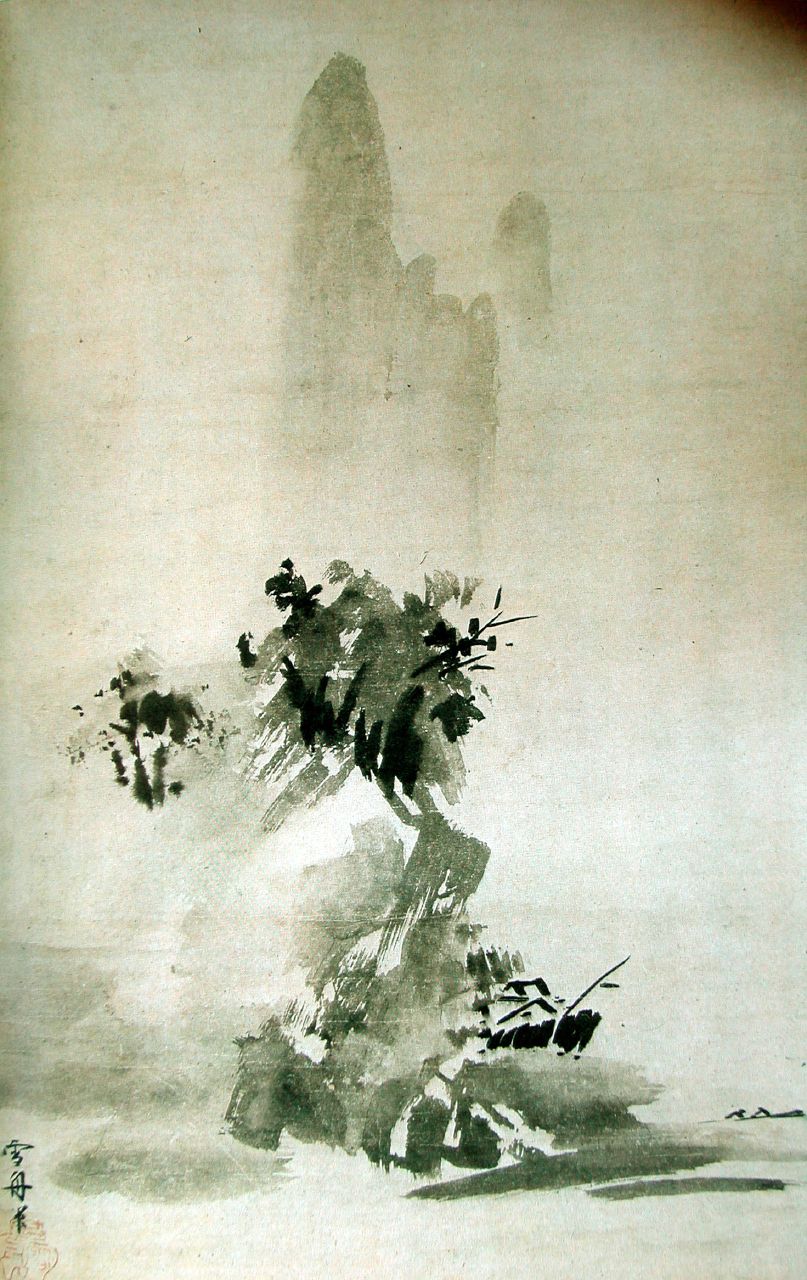 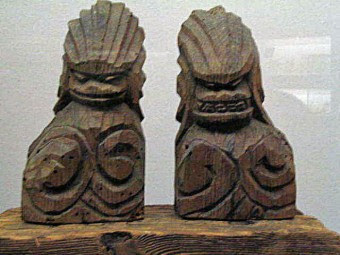 But there are other forces at work underlying this sensibility:
Chinese liondragons? Just chillin'--carved from the same ineffable celestial cloudstone ether into which they stare… 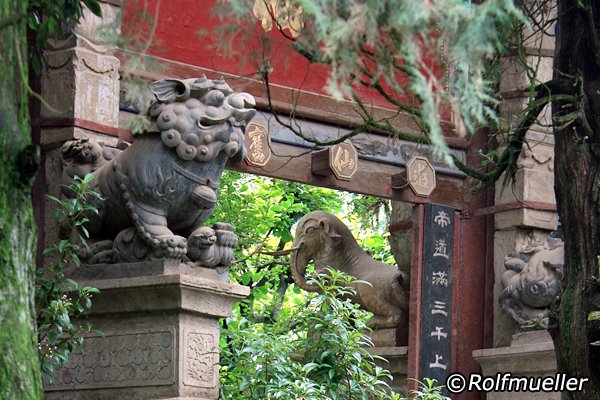 Japanese temple monster? You can totally tell someone went and looked at a real animal at some point before carving this guy…maybe it was just a shaved shih-tzu, but it was something with muscles and teeth and a face... 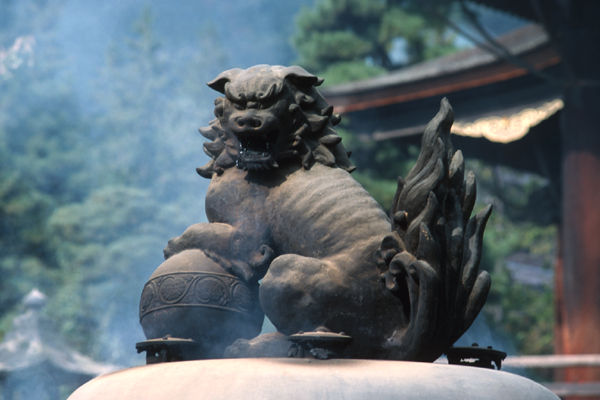 I'd submit that the reason almost all eastern and western paintings look so, well….old…to us up until very recently is we don't live in those same rooms. The homes of the modern not-fabulously-wealthy are hopelessly eclectic--we have all this shit because we might need it--the Ikea shelf and the New England blanket and the Japanese printer and the Italian yard sale end-table and the fake-Turkish rug and a dog bred by Chinese emperors to look like a lion. So we want a picture to bring its context with it, and establish a mood under its own power--the artist can't rely on the environment to provide the necessary counterpoint. It can be a conscious effort of will for a modern person to collect the necessary calm to engage a Velazquez or a Li Cheng, even when we recognize there's something worth seeing there.

---
I'm going to guess Japan's emerging merchant class had the same problem as modernity approached, and so, to serve them, Japanese artists created the earliest artform which is is still capable of giving the contemporary viewer no impression of being seen through a mist of time, the one that is still capable of striking even a child as being as fresh and as immediate as a snapchat: the ukiyo-e print.

The "pictures of the floating world" merged the fluidity and personal touch of ink painting, the design sense of the luxuries and textiles, and the visual ferocity always latent in the mythological sculpture to create something which became--as the form reached its peak in the 19th century--as different from what had come before as Jerry Lee Lewis' piano is from Mozart's.

Roughly in order, the (eminently D&Dable) highlights are… 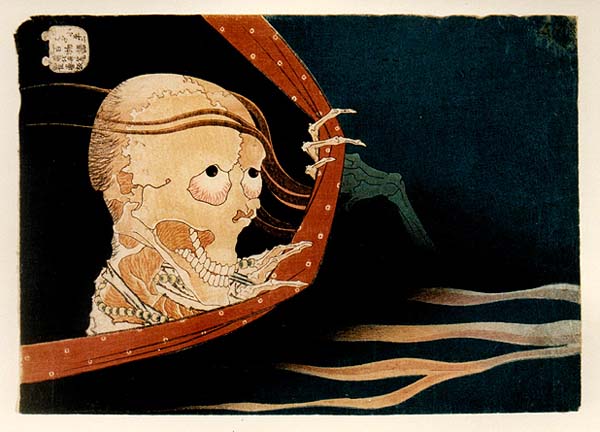 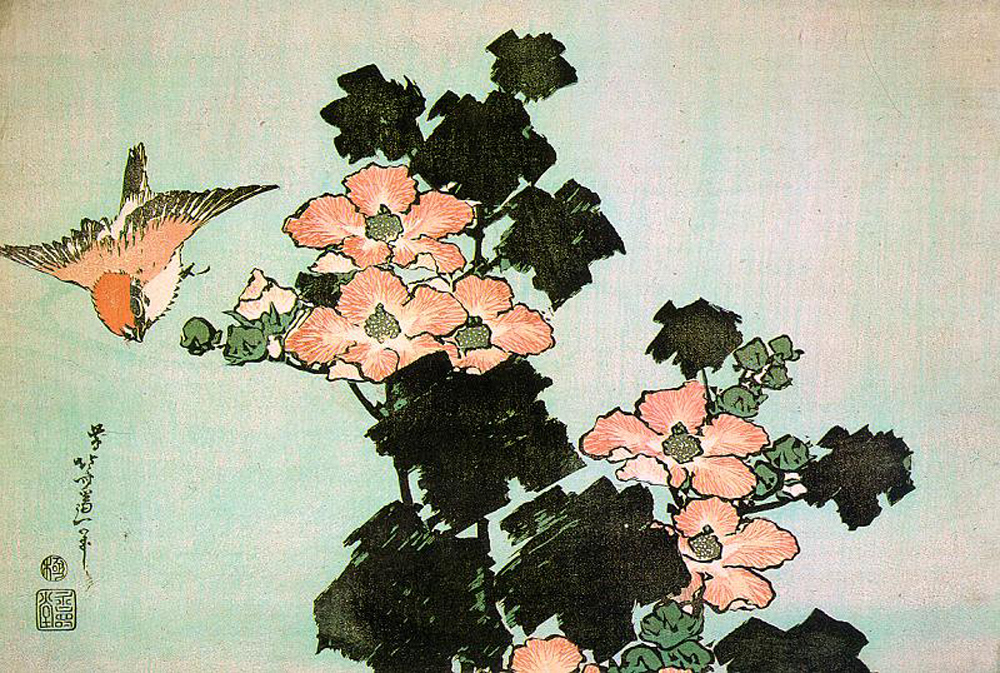 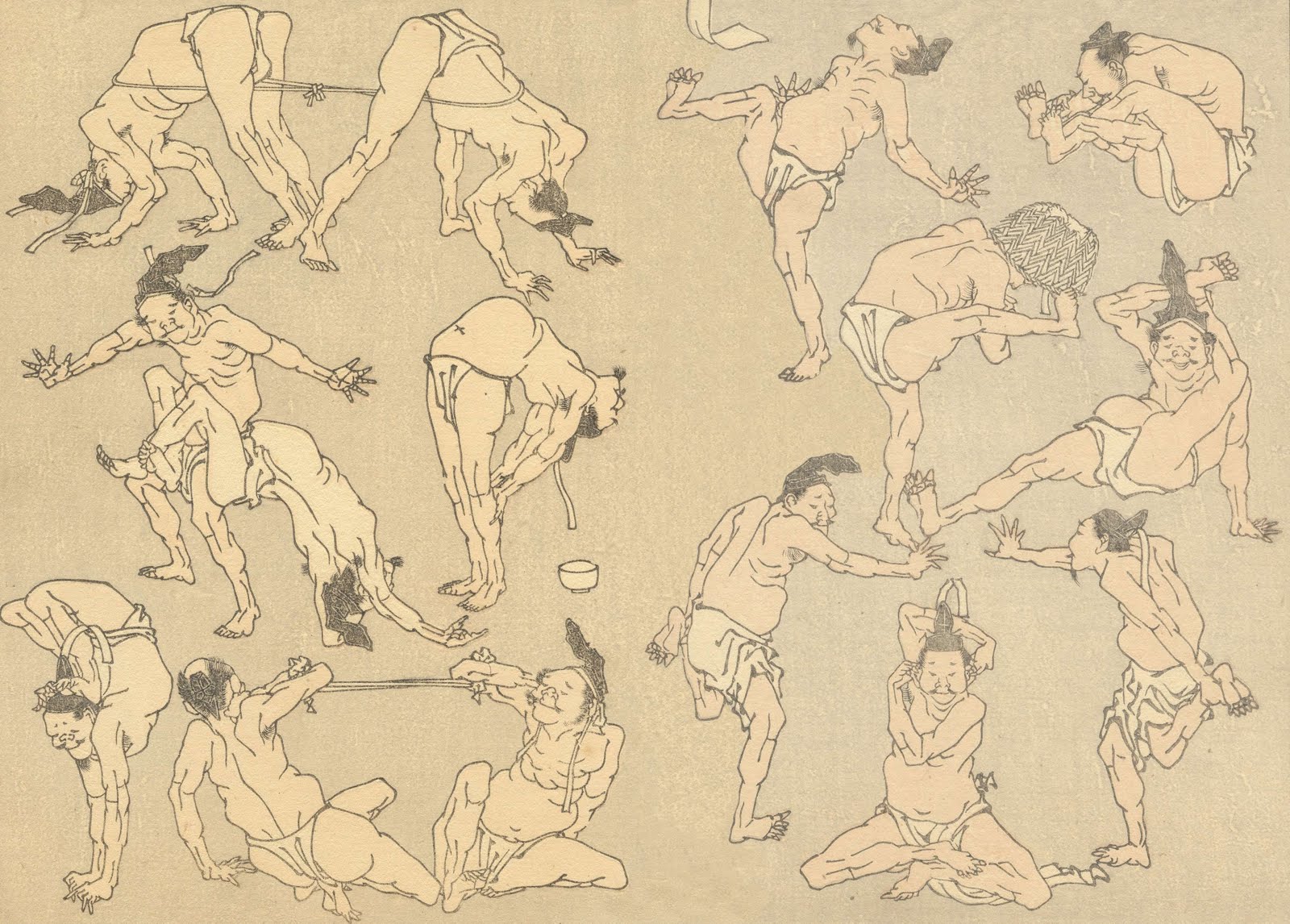 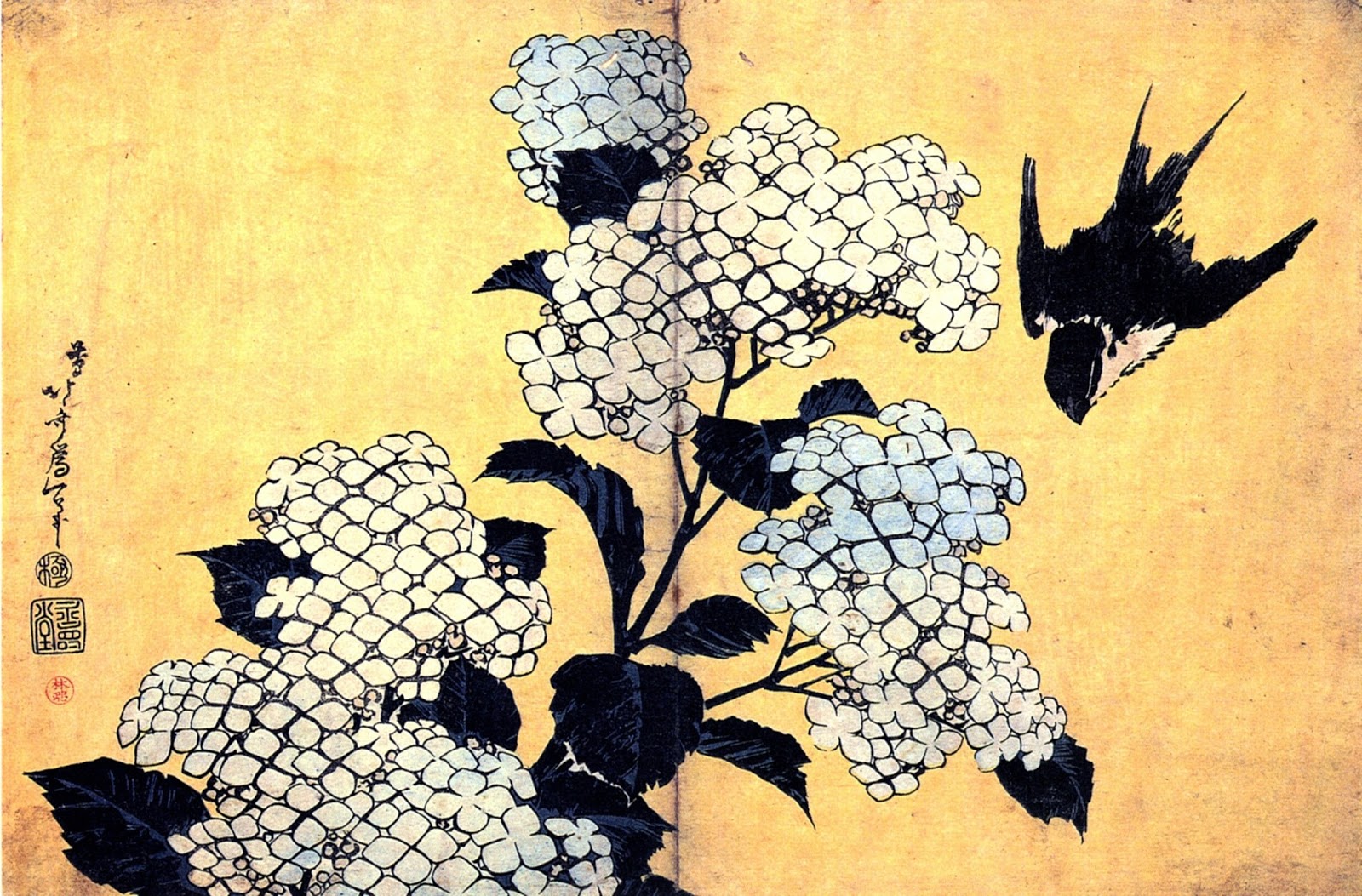 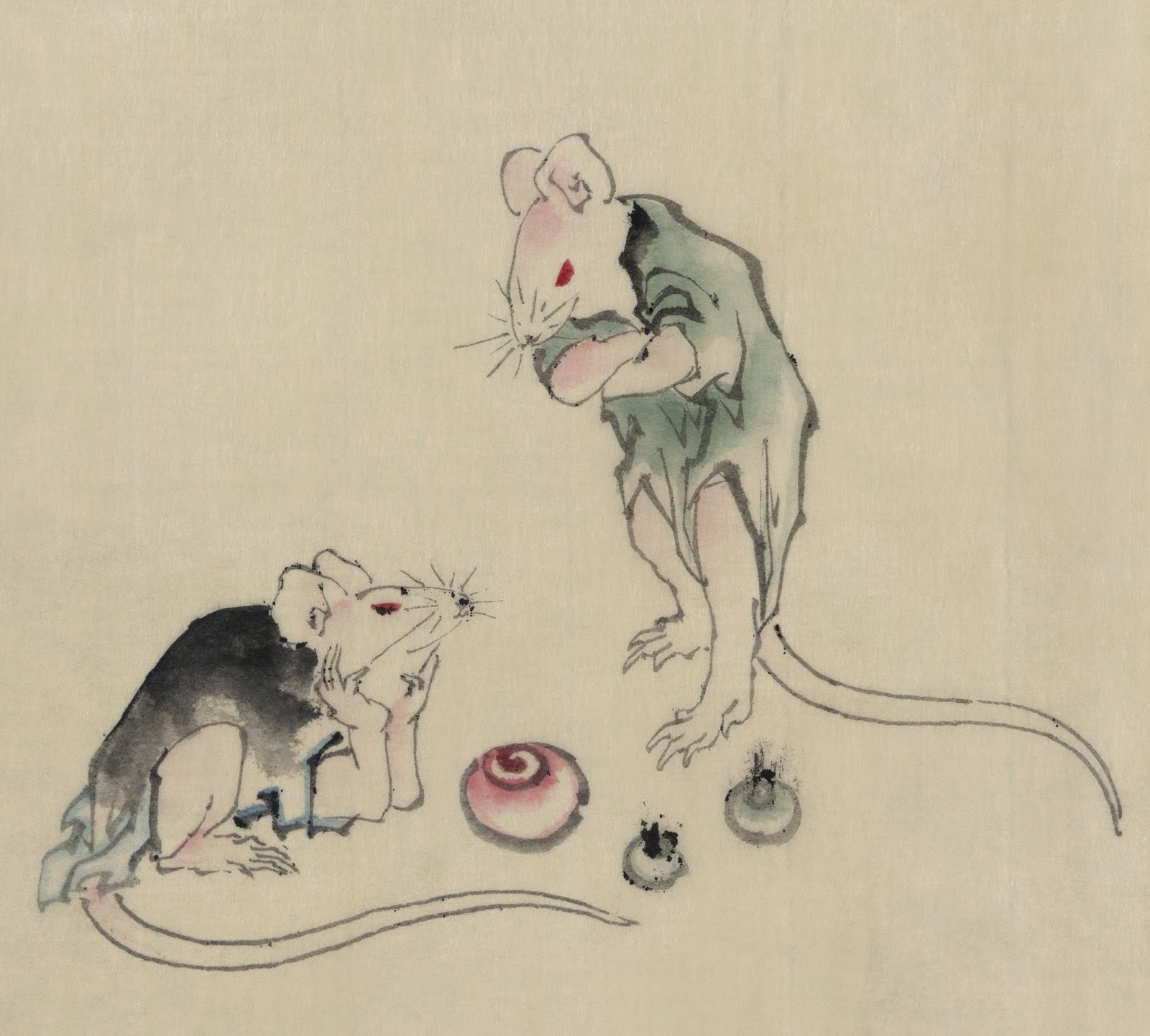 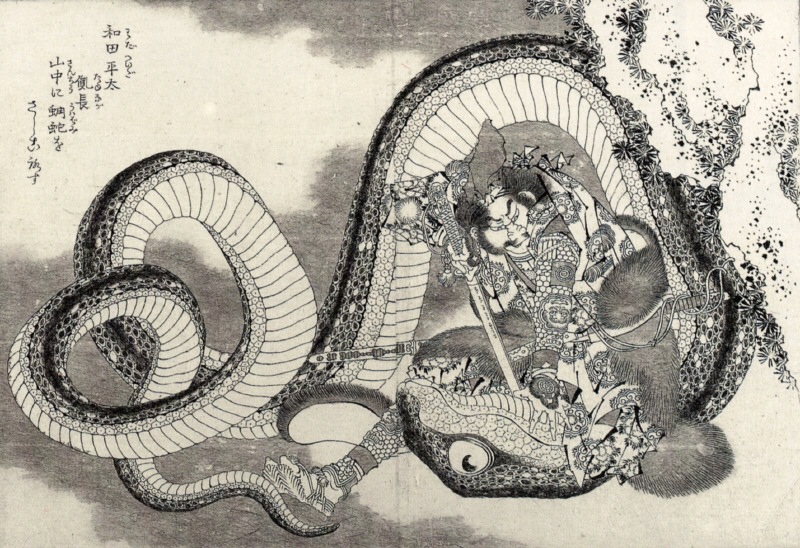 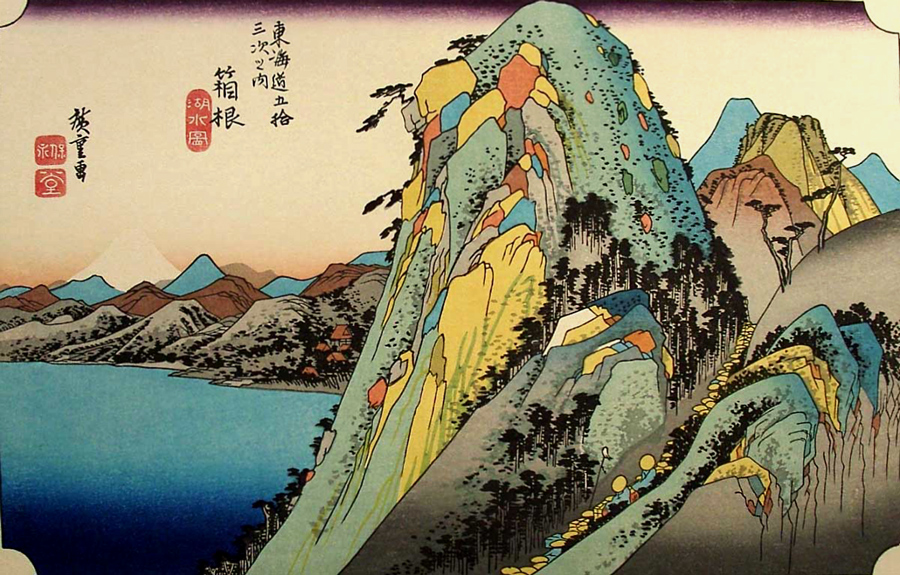 On top of that, the artist had to rely on rely on the block-carver to transfer their design from drawing to block plus maybe even new owners adding personal ownership seals to the final image--much as a contemporary comic penciller needs to develop a style that works no matter who the colorist, inker and letter are.) 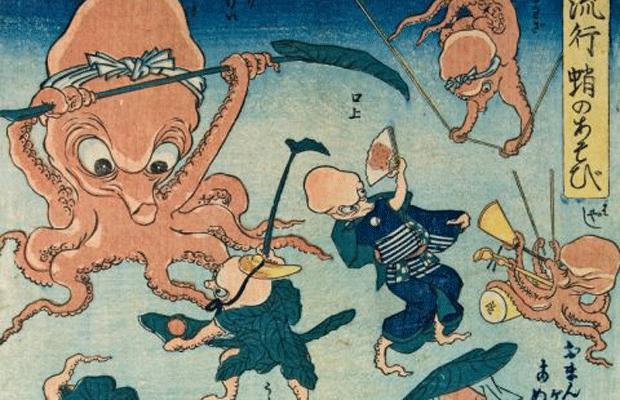 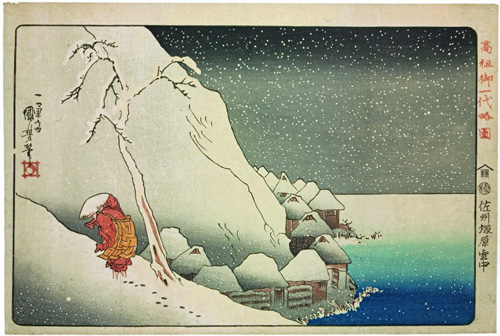 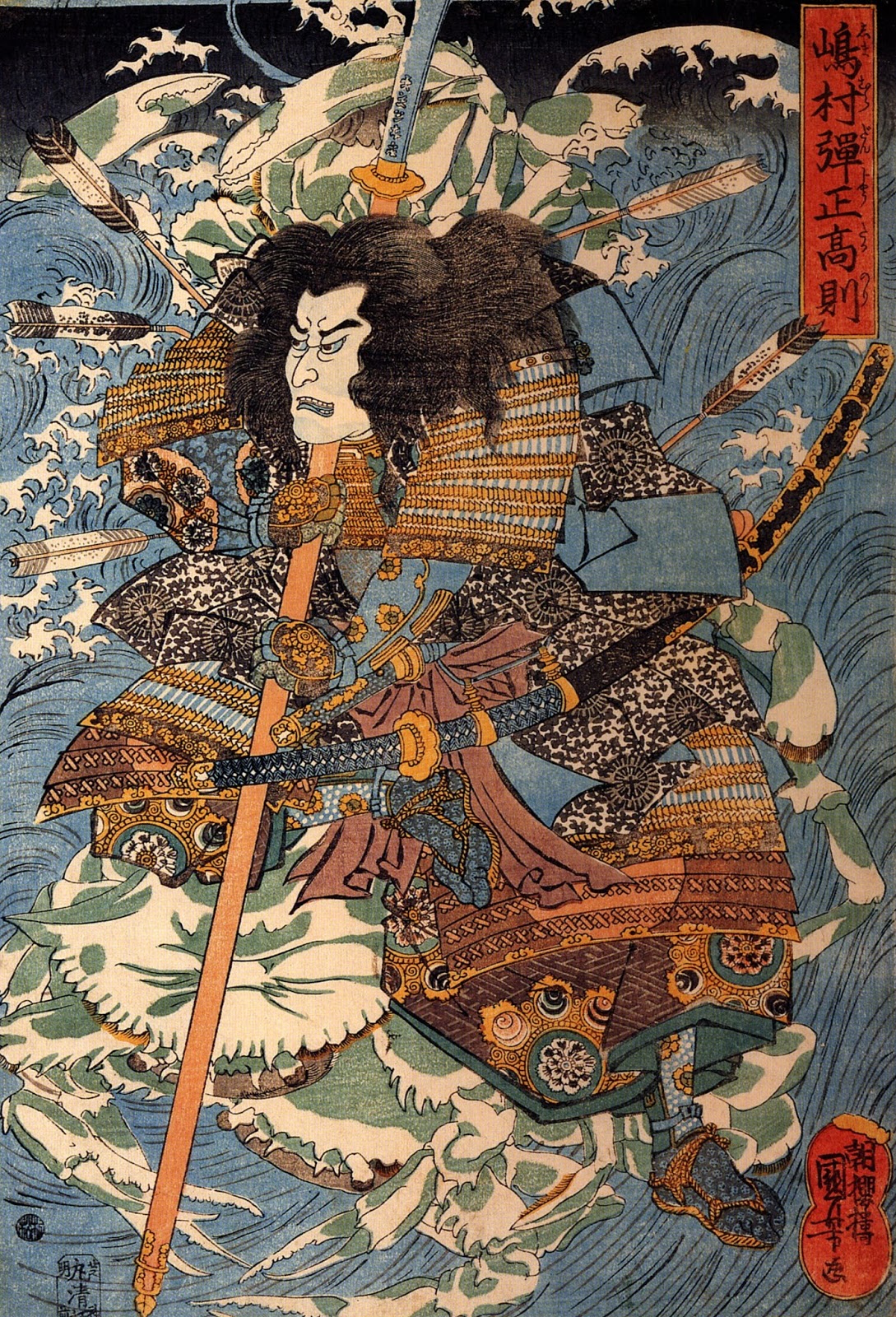 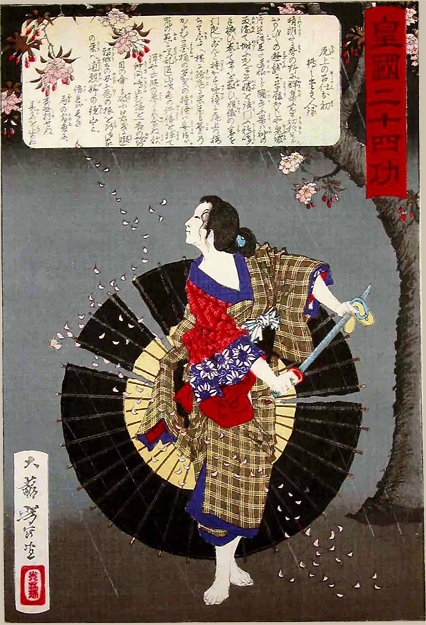 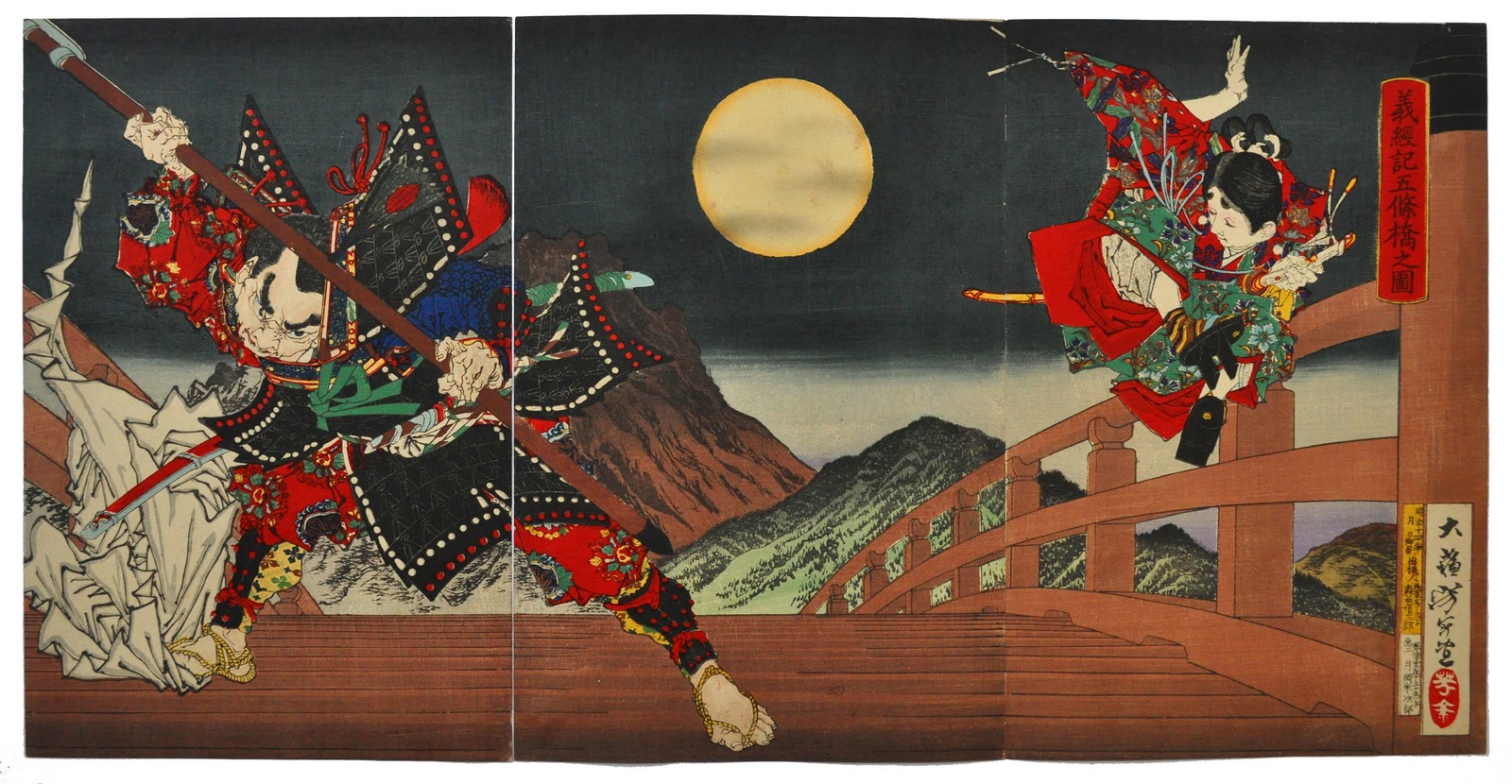 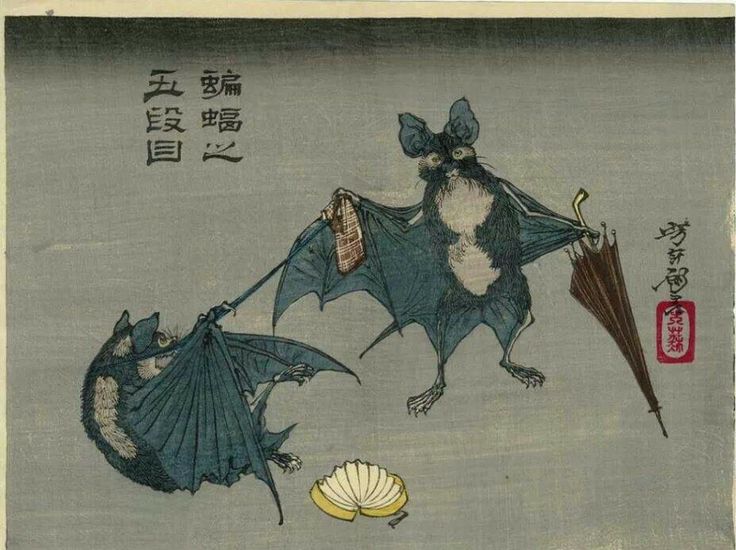 You didn't mention the Utamaro print with the kappa :)

You have succeeded on your Perception check. What now?

Damn but I do love Japanese monster art.

Thanks for turning me on to Yoshitoshi. Any collections of his work you'd particularly recommend?

I had one called "Beauty & Violence" which offers a great overview.
13 Ghosts is shorter but has wonderful big reproductions.
His career was long--it's possible there have been ever better collections with even more stuff printed since then.

I love this stuff - I got pretty deep into it and almost tried to get that Sesshu (or one realllly close) tattooed on me. The classes I had in art school talked about it in religious and social contexts, but it's great to read about it as art.
I thought to get a Yoshitoshi ghost tattoo, but haven't found juust the right one yet.
Man, art school was bad at talking about art.

Yeah I think most art historians are way more into the "history" part.

Is it just me, or was John Blanche influenced by this kind of thing?

Wow. The one with the hanging pregnant woman gave me the creeps. Hansel and Gretel have nothing on that. Totally Realms of Chaos or BoVD.

Well, usually in the West (or at least here in France) when you mention "Japanese prints" everyone starts thinking S·E·X so I thought you'd be mentioning those particular prints — and Utamaro's print with the kappa and the fisherman's wife is my favourite one.

If I did what people usually did there wouldn't be much point in reading me.

This series has been great so far, thank you!

One stupid thing I couldn't help noticing is your spelling of Velazquez, which I bring up because in Spanish "z" sounds like "th" in "thumb" (and I am pedantic enough to care).

All I care about is whether they look good or not and, for the most part, they don't.

And the supernatural and sex are, of course, intertwined everywhere.

you are right both about the spelling and about realizing you're being pedantic. I have changed the spelling--thank you!

"On top of that, the artist had to rely on rely on the block-carver to transfer their design from drawing to block plus maybe even new owners adding personal ownership seals to the final image"

And on top of that, there could even be multiple editions of woodblocks (both legal and illegal).

In relation to D&D many would have chosen to include Kuniyoshi's print depicting Takiyasha and a huge skeleton. I like your selection better.

And Yoshitoshi is just brilliant. There is also a nice print by him with a garden shaped as skulls (speaking of D&D).