"The Internet Is Screaming"

"The Internet is screaming with the harm caused, Zak; this very conversation wouldn't be happening if you'd not actively hurt and pissed off a great many people."
-Sean Patrick Fannon

Well 'the Internet screams' when 2 boys kiss on TV. The Internet is dumb as butts.

Got a note from Zeea last night...

(EDIT LATER--Zeea recanted this, and began re-harassing me on RPGnet. Her alleged grounds for doing this are a pair of literally insane beliefs:

-Mandy outed the Something Awful harasser sometimes screen-named Mikan as trans (despite the fact Mandy and I have no way of knowing secret info about Mikan)
-The Dongion blog, which is on my blogroll, referring to Mikan as "grotesque" was a reference to her trans status--which is impossible since that happened long before the alleged "outing" so how would The Dongion know?

So point is Zeea is either lying (seems unlikely, she's very earnest) or merely literally insane. However I've left the rest of the post intact for the record:)

--a trans gamer (and now RPGnet moderator) who often points out things she thinks are problematic in games, and whom, until recently, this guy Sean above might characterize as part of the "screaming" about the "harm" I caused by having the audacity to respond to the Dungeons & Dragon's peoples' request to email them my thoughts on the recent edition of D&D and then collect a check for it.

So, I've spent a few hours doing as much research as I can, and I've talked to folks some more.

I'm not going to equivocate. People made accusations against you without proof, the accusations got amplified and distorted and repeated through the Telephone Game effect, and I bought into it when I shouldn't have.

I can't find any evidence of you making broad transphobic statements. I can find evidence of you making trans-inclusive statements. Every transgender person involved in arguments with you was in an argument about something unrelated to being trans, with the exception of the "morphodite" thing, which was such an over-the-top obscure thing to say that I'll take you at your word that you were using it to parody a certain posting style.

Furthermore, in every one of those discussions, there was a lot of shit and toxicity flying around and everyone was hot-tempered. And finally, because all of the incidents I've found any public examples of were "person and an entire faction of people vs. person and an entire faction of people," even if there was cyberstalking aimed in either (or both) directions, there's zero evidence you instigated it or posted non-public information.

I don't think anyone I talked to privately is intentionally lying about this. I think they believe it. But perceptions color memories, as does hearing the same event discussed by multiple people, and some of things look a bit stretched by this point. I can't base an opinion on stretchy-looking facts.

So, I hereby apologize for and retract any implication that you're transphobic or have engaged in cyberstalking. I'm sorry. I'm going back to my original statement on the subject before I got all the private messages, which was, "As far as I know, neither Pundit or Zak S have said anything transphobic."

Furthermore, while I highly doubt that my opinion has _any_ influence on the subject whatsoever, and I wasn't the one who started this whole line of discussion (nor was I the person that got Mike Mearls involved*), I sincerely apologize if anything I said on this subject damages your industry reputation in any way. I disagree with you on plenty of subjects, but I fucked up here and let that influence me to believe and repeat something I shouldn't have.

Oh, bonus apology. I said you were disingenuous. Know what? I've reread a lot of stuff you've posted and then read it in the context of other stuff I've found in places I don't normally frequent. I retract and apologize for that, too. While you can be abrasive as hell and tend to accuse people of disagreeing with you because they're "conservative," it seems you're arguing based on a sincere belief and not intentionally strawmanning. Plus, you've displayed more nuanced opinions on the subject in some places, and if I'd seen those before, I'd probably have had a different opinion.

A complete history of the grudges that brought on the bullshit is here. The thing that got blown up into me "stalking someone" (I found someone who lied about me online and asked them a question. I did it by clicking on their screen name) is here.

And, if you need it: further evidence of my innocence of the various fuckwadderies published about me this week. The most obvious one being: people were asked to send evidence of me being bad to WOTC, the D&D company, aaaaaand: they got nothing.

If anybody ever has me saying a single bigoted word, they haven't got a single quote. For the best shot the rest of the opposition has taken, here's a hilarious list they've made of my despicable crimes, including tagging a guy into a Google + conversation about his ideas in case he wanted to defend himself and making this awesome cartoon: 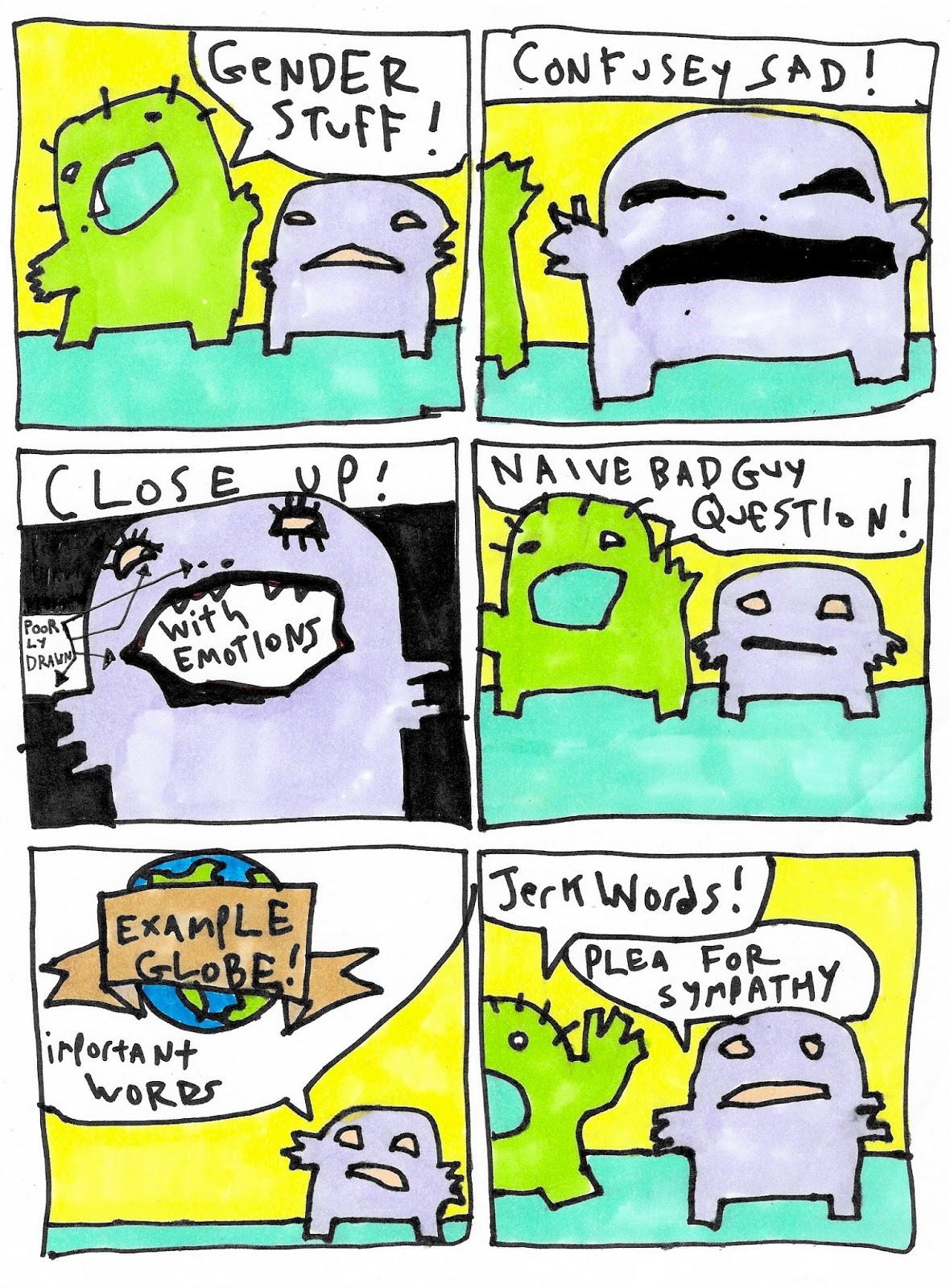 I'll be accepting apologies all week. Roll up.

Lots of other things going on in RPGland soon:

We are working on new episodes of I Hit It With My Axe (watch this one if you never saw it).

And Red & Pleasant Land is chugging along. Should be out this summer. Started working on a new edition of Vornheim and I helped James Raggi write a DeeeeeLuxe Death Frost Doom that'll be out soon.

Email ThisBlogThis!Share to TwitterShare to FacebookShare to Pinterest
Labels: DnD, etc, etc., I Hit It With My Axe, zak s

One type that bothers me are those that say things like "Zak S" might be an asshole, but censorship is wrong. I guarantee you that 90% of the time they have no idea why Zak S might or might not actually be an "asshole". They're just going along with the crowd, hoping to pick up a few points. But then the anti-censorship thing shows that they're broad-minded--"as much as I might think Zak S is an asshole, I still think it's wrong to censor him." Translation: I'm better than everybody on both sides because I'm principled and nuanced (but I still very very much want to be included in your Zak S is an asshole group).

Give me a break.

Actually nobody discusses "censorship".
the Tipper Gore Gamers are far too conscious of their wannabe liberalism to talkabout censorship.

They smarmily talk about JUST WANTING PEOPLE TO KNOW…that whatever they're watching/reading/playing will make them a bad person.

It's a different critique, and if we confuse it with outright censorship (of the right that _knows_ it's of the right) we are not smarter than them.

I know, but I used the word as shorthand. Personally I think that 1000 people lying about you or screaming "asshole" (in a community of 2000) just to go along with the crowd is worse than, say, some petty law saying you have to put Vornheim in a paper bag while passing a playground. As a one time card-carrying libertarian (and still a sympathizer) I didn't always think that. But I do now. Feel free to disagree.

I just think using the word "censorship" (even as shorthand) takes the argument down the wrong path. The path where they tediously explain they don't approve of censorship

They approve of _lying_ which is worse.

He actually said "the internet is screaming." Wow.

"Bullying"? Really? Disagreeing with or calling someone on their shit in an online forum is considered bullying? That couldn't be further from the definition of the word. And I would even go so far as to say that misuse of the word cheapens the plight of victims of actual bullying.
Sweet merciful fuck, what soft-bellied cave fish some people have become. I blame the screaming internet.

Sorry, but I don't give any fuck about the emotions of people that spread bullshit lies. Let the internet fucking scream for all I care.

Seriously what the fuck? I had not seen Zak do any harm. The worst he had done is demand evidence and ban those that really deserve to be ban.

Hell they are saying that Zak had done harm to David Hill and his wife. Bullshit! David's wife went after the women of this blog and Zak decided to defend them. There is no wrong in that. Zak's rights do not end when your feelings begin. To all those people that been hating on Zak I have this to say. Grow the fuck up.

Zak, the iron is hot. If there was ever a time to get into merchandising it is now. I Hit It With My Axe brand shirts that say "The Internet is Screaming" would sell like hot cakes.

I'm glad to hear about the new IHIWMA episodes. I've never heard why they stopped in the first place. Did Escapist end it or did you and your players just decide you didn't want to do it anymore?

Plus we had a lotta other stuff going on. But now they have more money so… yay.

Disagreeing with or calling someone on their shit in an online forum is considered bullying?

It is in some circles, but only when someone else is doing it.

There's gonna be updated Vornheim? How much of an update are we talking?

thanks for doubling my hits during my slowest posting period in 30 months Zac, wher is the irrepairable damage ppl speak of - im working full time and my insomnia and illness are temporarily managable so my imagination and frequency are a bit down right now on gaming ideas.

i did spend 3 days writing something cranky but i need a few friends to read for me before i post because i almost always regret it when my arthritis pain drive words do so well.

The distractible should be eliminated from the conversation.

I am eagerly anticipating A Red and Pleasant Land. When I read in this post about new IHIWMA episodes, I jumped up and did a little happy dance. After discovering your blog about a year and a half ago, my rpg life has been much enriched! Thank you!

I am sorry that I stereotyped you ... Based on your appearance and employment and associates, for the past six years or so I simply have presumed you are lgbt friendly. So prejudiced of me ... I clearly should have read all of your blog in a more deridan manner, seeking the hidden bigotry ...

Oh wait, turns out that would a been a colossal waste of free time BC it wasn't there to be found ...

This foolishness brought to you by the interwebz.